Young Dorothy Gale once said, “there’s no place like home”. I happen to agree; however, airports are like the wormholes that transport us between home and our destination. Often it can be a turbulent experience, though I think young Dorothy would contest her journey was no breeze either. Some airports, however, go above and beyond to prevent you from having a whirlwind experience. Some pride themselves on providing a more memorable and thrilling experience. In this second installment, I’ll be exploring 7 more airports that bring the destination to the terminal. 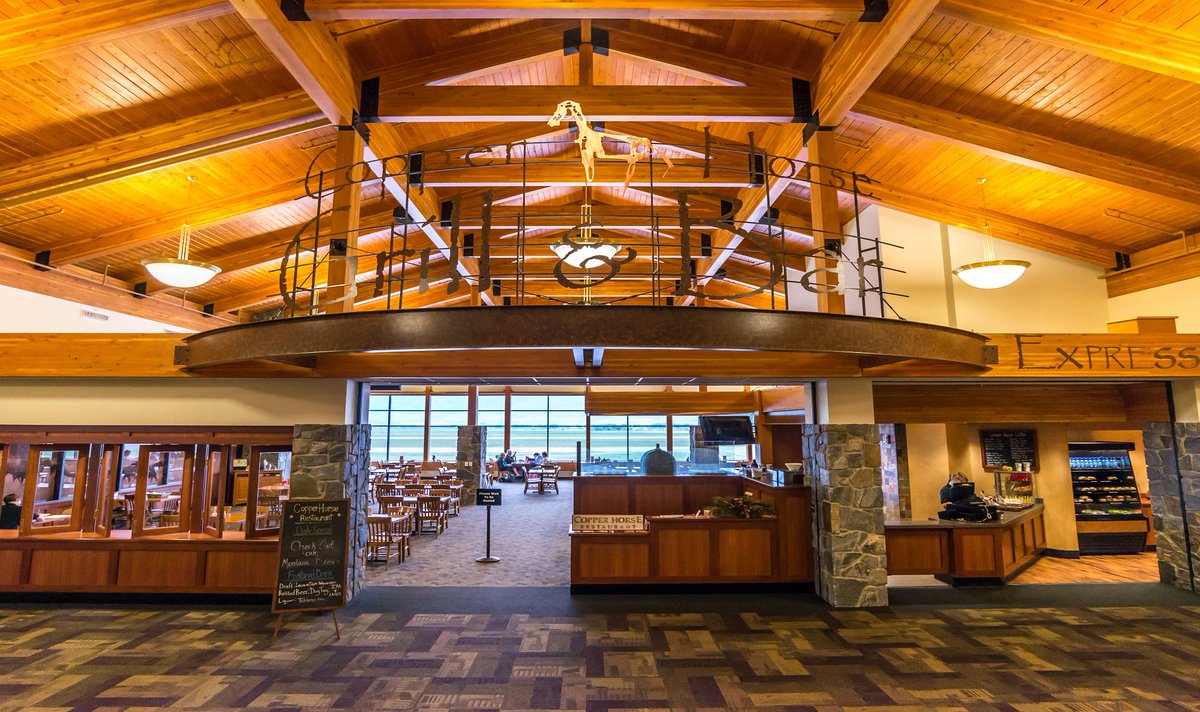 Buried deep in Gallatin County, Montana, is this little gem of an airport. There’s a good chance you’ve never heard of Bozeman, and that may be because the airport sees a modest 1.57 million passengers a year. While that’s definitely not a figure to be sneezed at, it is comparatively smaller than the majority of airports featured in the first edition. However, its quaint charm and small-scale operation is part of why Bozeman makes itself a destination in its own right.

Despite its small-town charm, Bozeman is still the state’s busiest airport with 19 direct flights to major US cities as well as providing multiple access routes to its namesake, the Yellowstone National Park. Furthermore, its proximity to numerous large mountain ranges makes it a yearly pilgrimage for many winter sport lovers. The airport offers all your standard amenities with great local food and themed decor throughout. The Copper Horse bar and grill provides all travelling to the region with a true taste of Montana. Whether you’re peckish before security or after security, there’s something for everyone. One suggests trying their signature breakfast dish “the corral” or have a bite of locally sourced grass-fed Montana beef.

It’s easy for this airport to feel like a home away from home, with its furnished with wooden animal sculpture, grand paintings and even an open wood fire in the colder months. The terminal itself has been built to reflect the wilderness of the region. Stone cladding and wood is a constant feature throughout making this airport feel more like an alpine log cabin! It’s easy to see why Bozeman makes for a great destination and just the thought of landing at this welcoming airport makes me want to kick back on an armchair and fall asleep to the sound of a crackling fire. 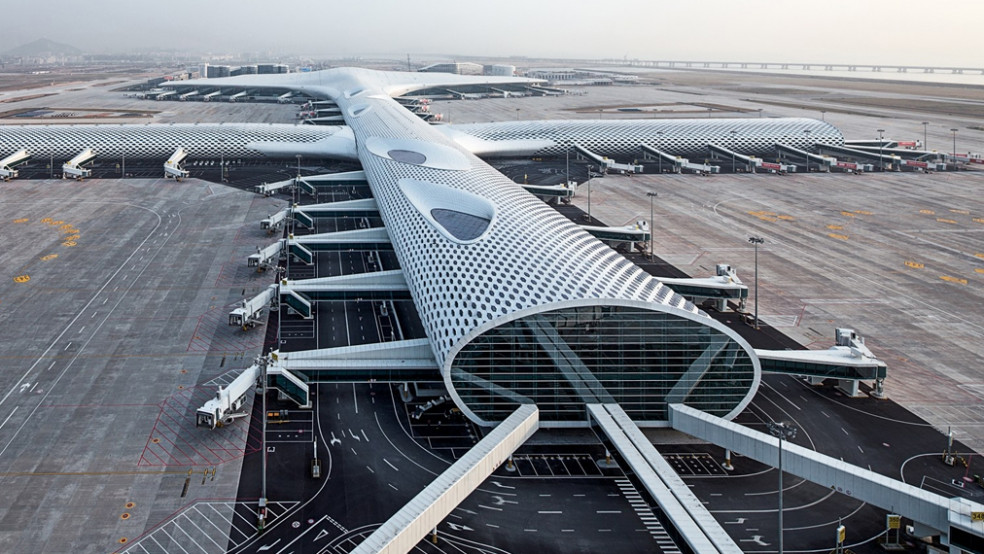 From peaceful log cabin vibes, we venture over to Shenzhen where cutting edge technology and modern architectural design make this Chinese airport a destination in itself. The terminal was designed in the shape of a Manta Ray, a fish synonymous with elegance and pristine rhythm. More distinct perhaps, is the honeycomb twin layer that embodies the terminal. This allows an unlimited amount of light and air to enter the wide, open spaces inside, giving the terminal a grand appearance. The architects behind this out-of-world design are known as Massimiliano & Doriana Fuksas who together own Studio Fuksas. Hailing from Italy, design runs in their heritage and their portfolio is truly futuristic. The terminal, having said that, is more than just a pretty sight to behold. The design adopts some very sustainable concepts and technologies including chilled water storage, zoned air-conditioning, heat recovery and a solar hot water system.

Admittedly, the Shenzhen airport does lack in the entertainment and food departments. There are some great dining out options before you head through security but you’ll have to settle for some basic cafes and airport lounges on the other side. However, this really feels like a small sacrifice when you have this fantastic architectural wonder to stare at. Though, you will find all your major luxury retailers inside from Versace to Hugo Boss. The airport even has a post office and a leisure centre, making it feel like an oversized community centre. Who doesn’t love the idea of chilling in a leisure centre while transiting? 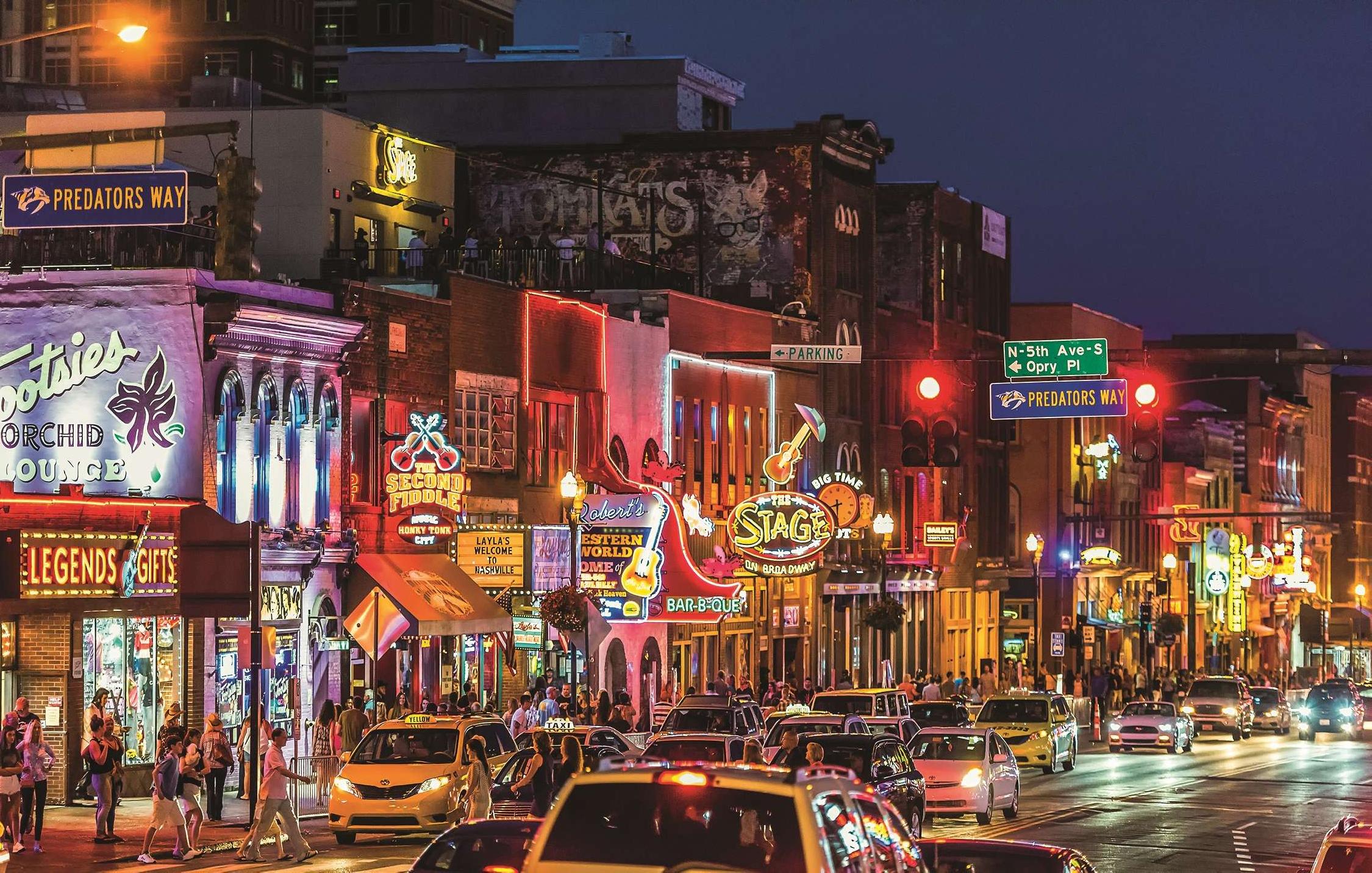 Workin’ 9 to 5, what a way to make a living. Music city plays host to the third airport on this list. It’s the home of Dolly Parton, country music, Jingle bell rock and even President Nixon played “God bless America” on the piano here. Music courses through the veins of this great city and expect nothing less from its airport. For starters, It’s a happy place, I’m it’s Nashville, right? But seriously, it ranked in the top 10 friendliest airports. If that doesn’t put a smile on your face, the live music performances will. Numerous airport bars, such as Tootsies Orchid Lounge and Gibson Café, feature live performances from local musicians. Aside from the musical bars, there are numerous stages, both temporary and permanent, scattered around the airport as it welcomes around 100 different artists and bands each year. Chances are, you will catch a classic Nashville welcome if you’re transiting or visiting.

Nashville Airport’s very own world-famous Tootsie’s Orchid Lounge. Get a real taste of Nashville without ever even having to step out of the airport. Photo: Delaware North

As previously mentioned, the airport is not short of a good bar. You can’t visit Tennessee without sampling some Jack Daniels at the source, and yes there’s a Jack Daniels themed bar, Tennessee Tavern. Brewery called Yazoo has a small set up in the Concourse C food court so you can have a Tennessee beer to go. And then, of course, Tootsie’s need no introduction, being one of Music City’s most famous honky-tonks. At this point, I could easily forget I’m reviewing an airport however, BNA as it’s known, is one of the United States’ fastest-growing airports. It’s severed as a base for American Airlines in the past and is now a big focus city for Southwest Airlines. Now I must move on from Nashville Airport before I start uncontrollably quoting Dolly Parton or spitting up facts about how Elvis recorded over 200 songs in Music City. 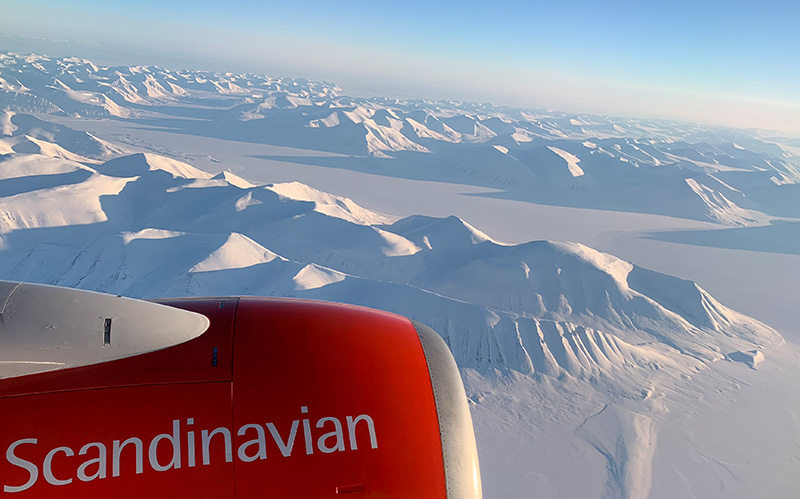 The archipelago of Svalbard as seen from a SAS flight. Photo: Life in Norway

The world’s northernmost commercial airport. Well, actually, due to Svalbard’s incredibly unique location, most things here are the northernmost in whatever they are! Despite appearances though, it’s far from an arctic wasteland and while the airport itself is relatively basic, the views from the air are something out of a National Geographic special. When I say basic, what I mean is that you will likely have to go into the town for anything more than a breakfast cereal bar. And just pray you don’t have an overnight layover here because, in winter, nights can last for three months! I’m joking, there are no overnight layovers here. The airport has direct flights to and from Tromsø and Oslo on the mainland. Scandinavian Airlines and Norwegian are the only two airlines that fly to this tiny archipelago of islands. 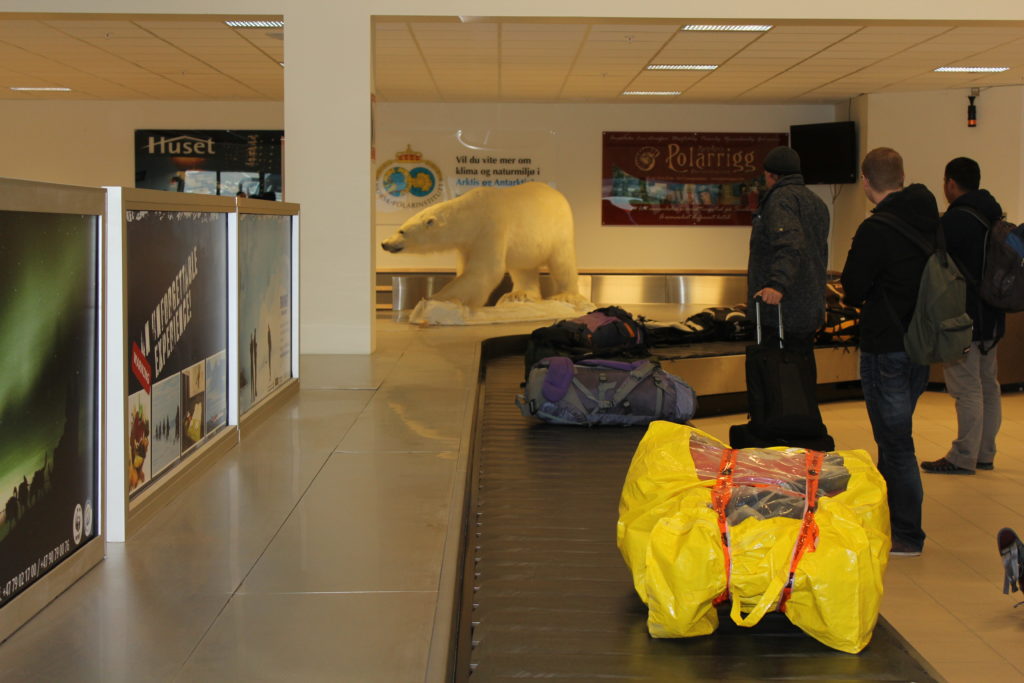 The airport itself is a bit of a miracle. The runway was built on a layer of permafrost although, with rising global temperatures, Svalbard’s permafrost layer is constantly reducing. This meant the airport had to get innovative with its solution. The runway would constantly need repaving due to the permafrost coming and going, thus a next-generation insulation system now keeps the air-strip stable all year round. One thing you’ll notice at this arctic circle airport is the number of polar bears patrolling the terminal. Not to worry though, they’re all stuffed, something you’ll find a lot on the island because it’s illegal for dead polar bears to leave the island! And for a place where people are outnumbered by polar bears, that’s a lot of stuffed polar bears. 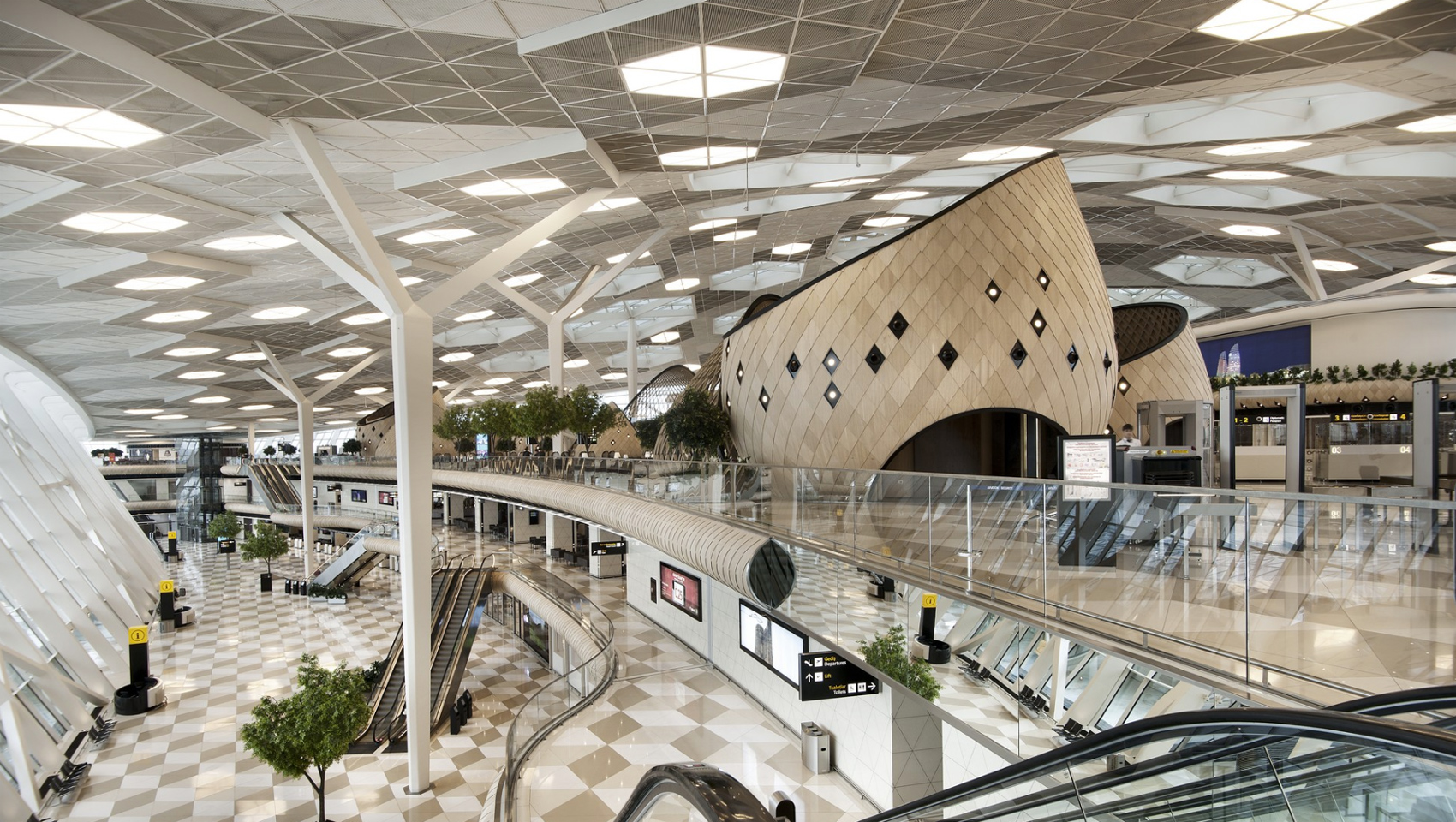 Another airport you may not be all that familiar with, but you should be as it’s been rated a 5-star regional airport by Skytrax. Baku also features in Skytrax 100 best airports in 2020 guide, so its no slouch! Designed by Turkish architect studio Autoban, this airport of the future sets a new standard for regional airports. However, it’s far from a regional airport as it’s the busiest airport in the caucus region. The triangular terminal fashioned out of glass “bubbles” allows a lot of natural light in, a consistent feature in modern airport design. The interior is lined with trees and wooden cocoons which have become an iconic feature here. While its amenities are simple, it provides the savvy traveller everything they need to enjoy a visit to the innovative city of Baku. There may not be much in the way of entertainment here but much like Shenzhen, the architecture will leave you awestruck. 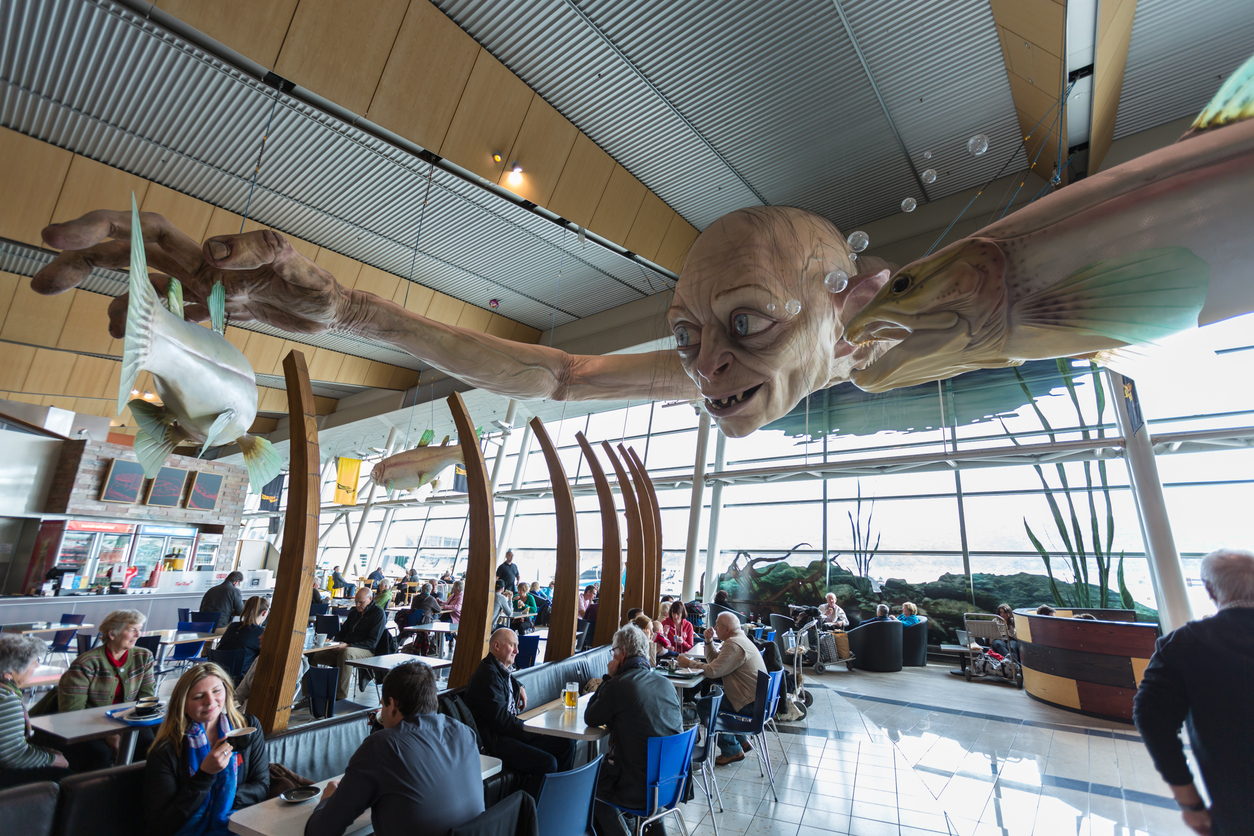 Windy Wellington, as it’s known locally, is home to the best terminal, period. Yes, it’s true, Gollum is suspended while fishing in the food court. In fact, much of the airport has references to Lord of the Rings, so middle earthlings will feel right at home. The airport also features a redeveloped terminal design called “the rock“. 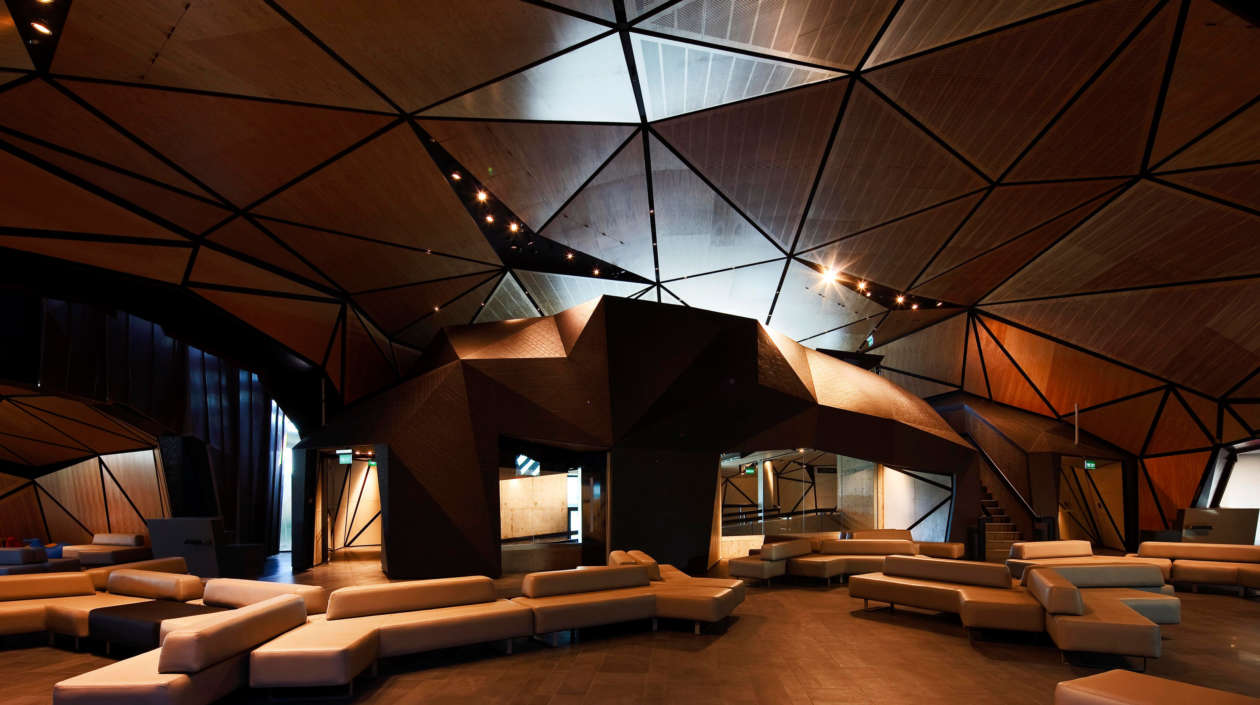 The Rock at Wellington Airport. Photo: Warren and Mahoney

Designed by architects Warren and Mahoney, the unique structure mimics the environment that surrounds Wellington Airport. Much of the landscape is mountainous, uneven and angular with a rocky seafront. The space inside the rock has been designed to provide the utmost comfort to the weary traveller. Maori artwork can be seen displayed around the airport celebrating the regions rich culture. If you enjoy sitting on the edge of your seat during landings and take-offs, Wellington is the airport for you. The single-lane runway is a mere 6,351 ft. It’s a modest length, however it feels far shorter when you see the sea sat at either end of the runway! Don’t worry though, it’s not like the pilot has to contend with hurricane-force winds upon landing… 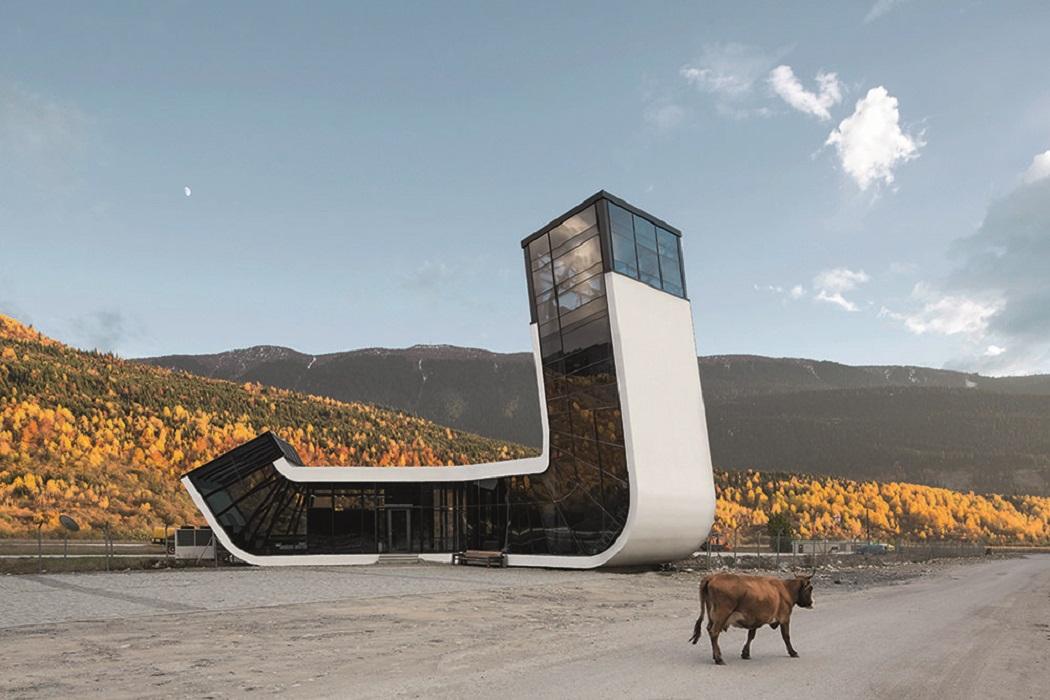 Most unique terminal building you’ve ever seen? Sure is for me. Strictly speaking, the airport only has one commercial flight route connecting the region to Tbilisi, however, it was too funky to leave out. Queen Tamar is a small airport serving the medieval UNESCO world heritage town of Mestia, located in the Samegrelo-Zemo Svaneti region of Georgia. The flat laying L-shaped building was designed by architect Jürgen Mayer, who drew his inspiration from the old watchtowers of Mestia. As for the name, the airport was named after Queen Tamar of Georgia, who ruled the country from 1184 to 1213. What makes this airport a true destination of its own however has nothing to do with the groovy spaceship building nor the runway, but the scenery on the way in and out. The brief flight between Tbilisi and Mestia passes through some of the country’s most unbelievable mountain scenery and medieval villages. It may not have a hyper-comfy lounge or high tech baggage claim but there are some things we can let slide for an unrivalled window seat view like the one below.

Which airport peaks your interest most and if you could, which one(s) would you visit first?

Deputy Editor - Jonathan is a creative professional with a strong background in Journalism, Aviation and Photography. Jonathan writes about commercial aviation, aerospace engineering, and sustainability. With extensive writing skills and knowledge of general media, Jonathan has worked closely with tech start-ups and digital marketing agencies around Australia and the world.