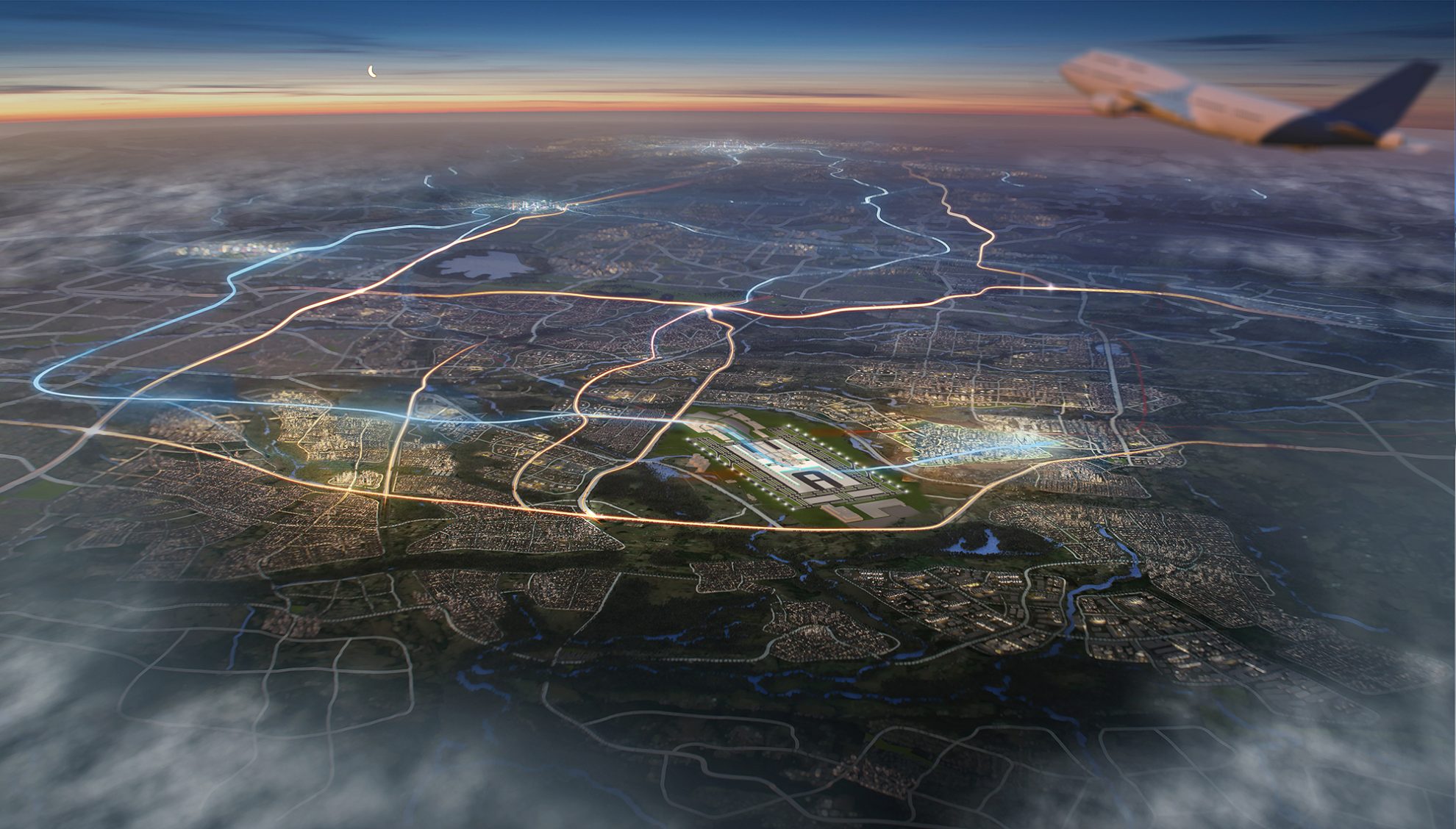 For decades, Sydney has been crying out for a new international airport to back up the overcrowded Kingsford-Smith Airport in Mascot. It is finally getting one, but not without drama and controversy!

Badgerys Creek, a small village west of Liverpool and southeast of Penrith, is set to be the site of the new “aerotropolis”. Construction began in September 2018 after the official designation of the new location in April 2014. The A$5.3 billion project is only one part of the Australian government’s plan to revamp and expand Sydney’s infrastructure. A new A$1.8 billion “M12” motorway is set to be built to service the airport between the connecting M7 and Northern Road. Furthermore, an ambitious A$8 billion metro rail project is set to run through the airport and aerotropolis site connecting it to Sydney’s CBD and western suburbs.

With all this government money flying around, I made it my mission to find out exactly what is brewing in Sydney’s ever-expanding west. Western Sydney Airport (WSA), also known as Badgerys Creek Airport to locals or the Nancy Bird-Walton Airport is due for completion in 2026. The airport has been named after Nancy Bird-Walton OBE, an Australian aviation pioneer, known as “the angel of the outback”. Famously, she was the youngest woman, at the age of 19, to gain a full pilot’s license. She went on to found and become a patron of the Australian women pilots’ association, a true-blue legend.

The long-winded road to Badgerys Creek

Thanks to WSA’s rural location,  the site will be curfew-free and it will operate as a 24-hour airport. This will alleviate some pressure on Kingsford-Smith Airport (KSA) which had a night-time flying curfew imposed in 1995 shortly after the completion of a third runway in 1994. The federal government built the third runway in place of a second airport despite the acquisition of 4,400 acres of land between 1986 and 1991 costing around A$170 million.

Sydney’s second airport conundrum has been ongoing for over 70 years with the discussion first arising in the 1940s. KSA is one of the world’s oldest airports having been built in 1919. It’s proximity to the city is incredibly useful for travellers, however development around the area has prevented the airport expanding past a third runway. The site is restricted by Botany Bay on one side and by rapid urbanisation in Mascot, Tempe and the Bayside council area. Despite the extra runway, fears that KSA would hit capacity before 2030 grew and in 2008, plans for a second airport were resumed. In 2012, it was announced that Badgerys creek would clearly be the best site to build Sydney’s second airport.

No major project comes without roadblocks

Coronavirus hit the world early in 2020, posing a potential halt in plans. However Federal Population, Cities and Urban Infrastructure Minister Alan Tudge believes that the economy should make a full recovery by 2026, resulting in no impact on WSA. He says that WSA is a project for the next century of aviation in Australia and the pandemic should not interfere with the airport’s purpose. It’s believed that the airport will create 11,000 direct and indirect jobs in Western Sydney which is vitally important in aiding economic recovery. Western Sydney has become synonymous with unemployment and welfare dependant families. WSA can and will provide opportunities to deflate the current unemployment rate of 7.1% which is 1.1% above Greater Sydney’s average. By 2031, the Morrison government has predicted the airport will provide almost 28,000 direct and indirect jobs. This figure however has been up for dispute following a labour market analysis report carried out in 2017.

An airport without planes? That’s how it currently stands as the federal government has yet to release a flight path plan for WSA. A large backlash from locals in 2015 quashed what originally appeared to be proposed flight paths for the initial opening in 2026. This came after the Abbott government released an environmental impact statement (EIS). The EIS based its data around a merge point approximately 1,500ft above Blaxland, a town located in the heavily-protected World-Heritage Blue Mountains National Park. Since 2015, no official flight path has been announced by the federal government despite growing unrest in the local community. Western Sydney MP, Ed Husic, said in a statement that residents want to know just two things: would they benefit in a job and will their homes be affected. He went on to express that the government has avoided the subject of flight paths for years despite pumping out a steady flow of media releases talking up the benefits of WSA.

Scandalous dealings have also surrounded land acquisition in recent years, with a plot of land selling for A$26.7 million more than its value. It’s thought that some unethical behaviour by unnamed departmental officials led to the uninformed purchase of land related to the “Leppington triangle”. The Australian Federal Police has launched a criminal investigation into the matter.

Galactic Empire of sorts, the new aerotropolis will also be accompanied by two new cities, a south and north city. These “cities” will service the airport and stand as independent commercial centres. Construction is due to continue through to 2050 in what is being hailed as a once-in-a-century project. The aerotropolis will include high-tech industries, universities, convention centres, hotels, produce markets and sporting stadiums. The state-of-the-art development could end up being twice or three times the size of the existing Macquarie park development.

The terminal itself is being designed by International firm Zaha Hadid Architects and Australian firm Cox Architecture. By mid-2021, Lendlease CPB, Multiplex or Watpac will be chosen to design and build the terminal. The state-of-the-art, environment-inspired terminal will host a range of cafes, restaurants and shops with a large central plaza. The Western Sydney website state that Western Sydney University students and Dharug community members were also involved in the initial design concept. The design mimics the curvature of the symbolic Blue Mountains, a dominant feature in the backdrop of the area. The terminal has been designed with large open spaces, allowing plenty of natural light to filter through the airport. Vertical gardens give the space a peaceful, environmental feel, while timber ceilings add to the sustainability of the design.

Sustainability is at the forefront of the brilliant minds that piece airports together in this day and age. WSA is no different. Many initiatives make WSA an exciting prospect for the environmentally conscious traveller. The aerotropolis is being marketed as a low-carbon city utilising next-generation waste and water infrastructure. The city will also feature natural urban-cooling systems and increase in tree canopy and biodiversity corridors. However, every great plan comes with its logistical issues. The proposal to increase the tree canopy by 40% as well as create rivers and wetlands will drive winged creatures into the vicinity of the airport. Without a mitigation system, this will present itself as a potential air safety issue. The city regarded as the “Western Parkland City” contradicts the principals of safeguarding against wildlife hazards. Bird strikes on aircraft have caused the loss of more than 600 aircraft and 532 lives internationally, according to data provided by Avisure. There are around 20 species of birds and seven known flying fox colonies in the area that have been identified as a threat. The state opposition party has called for a clear mitigation plan to be released, however what impact this will have on the airport’s green vision is yet to be understood.

Aside from kamikaze birds, WSA faces a more pressing issue. Sydney gets hot. It’s no secret that Australia is feeling the affects of climate change more than most countries at the moment. With the mercury seeing temperatures above 50ºc more than once a year in Sydney, experts say highly urbanised areas may even become uninhabitable within just a few decades. Heat already kills more people in Australia than cyclones, floods and bushfires combined. Western Sydney has become a sprawling mass of 2.5 million people, that’s around 10% of Australia’s entire population. On January the 4th, Penrith recorded a record high air temperate of 48.9ºc. Bitumen temperature recordings saw the mercury hit 80ºc and children’s playground equipment came in at a scorching 100ºc. Heat has become such an issue in Western Sydney that 24 hour Kmarts have become a social hub for people escaping the heat. One of the main issues Western Sydney faces as a suburb is economically deprived areas, and many of the residents cannot afford to run air-conditioning in summer. This causes numerous deaths each year for a number of causes and the landscape is only getting worse. With Western Sydney’s population increasing at an alarming rate, shopping centres are becoming overrun with people seeking shelter from the swelter.

Mattheos Santamouris, a professor at UNSW, believes that ‘many’ places in Western Sydney could be abandoned in the coming 20 to 30 years. With radient air temperatures reaching above 80ºc in summer, Sydney has to find ways to cool down fast or face the reality that WSA could become a redundant project. Mitigation and adaption seems to be a way forward for the region. Some suburbs are around 80% sealed on the surface, allowing for very little heat absorption. This includes roads, large car parks, housing and a soon to be airport and aerotropolis!

Sebastian Pfautsch, an urban heat expert at Western Sydney University, says that this figure needs to go down below 25%. A potential solution could be taking houses underground or building up to free up large areas of green space. Building up or down will also make air cooling cheaper and more efficient. Radiating heat into outer space is another forward thinking idea. Painting roads with heat-reflective paint could reduce surface temperatures by 10ºc. Next generation materials such as photonics have the ability to propel heat into space and these could be ready in as little as a few years. Progress is being made on the matter and WSA certainly is climate aware. However, building on precious green land contradicts one of Sydney’s most pressing issues.

The prospect of Sydney’s newest airport is exciting and time will tell if it is destined to become a destination in itself! Will you be booking a ticket to Western Sydney in 2026?

Read More
One year on since Boris Johnson made the announcement that the UK would be going into a national…
Read More
Airbus has not released a brand-new airplane in a while, and there has been some speculation going around…
Read More
Wizz Air is set to replace its Head of Flight Operations after audio recordings emerge from last year…