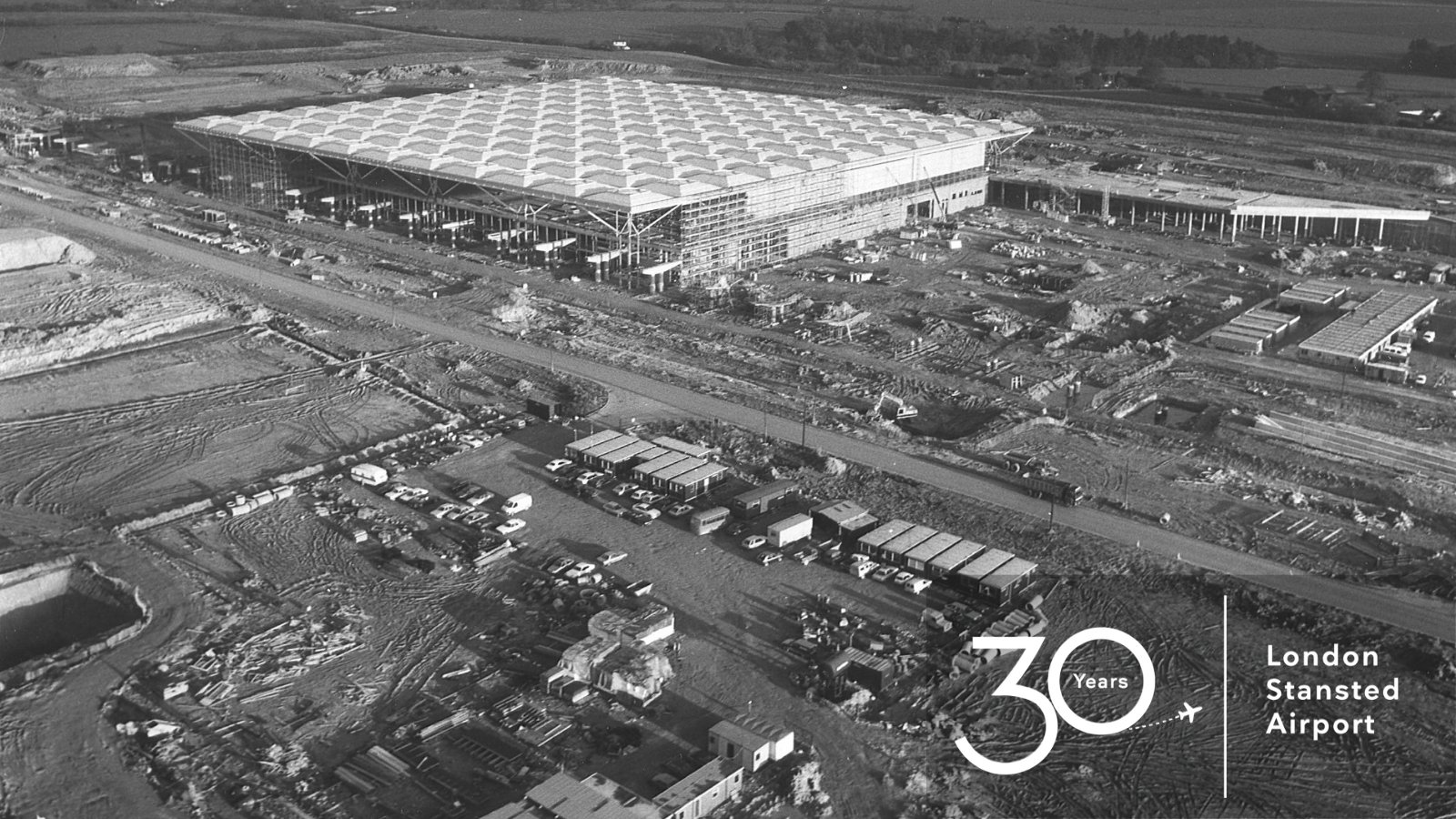 Stansted Airport is one of the UK’s busiest aviation hubs and has been transporting millions of passengers worldwide since the opening of its iconic terminal in March 1991. 30 years on and the airport located in Essex is having a quieter birthday this year due to the COVID restrictions affecting the whole of the aviation industry.

However, up until restrictions were imposed, Stansted was thriving and having operated for many decades, it is bursting with more history than you might think. So read on as we explore everything about Stansted Airport and how it has changed over time!

An Impressive Milestone for Standsted Airport

On March 15, 1991, Her Majesty the Queen officially opened the terminal building, aprons and taxiways which began operating the first flights from the ‘new’ airport as we know it now. The £400 million facility was designed by Sir Norman Foster and quadrupled the airports capacity taking passenger numbers from two to eight million.

Since then almost 460-million passengers have passed through the airport with 3.95-million flights. The terminal has even been extended further including a £50 million extension to the arrivals area.

Although, this is a very impressive milestone for Stansted and it’s commercial success, it has actually been an airport for much longer then you may realise. Stansted, used to be known as RAF Stansted Mountfitchet and was a Royal Air Force station serving during the Second World War.

In 1942, the runway was built by the US Air Force and was used as a bomber airfield and a major maintenance depot before officially opening on 7 August 1943.

Stansted played a key part of the important operations on D-Day in 1994 as bombers from the airport led more than 600 aircraft over the beaches of occupied France. After these events, the use of RAF Stansted as an air base gradually declined and the airport began being used for civil purposes in 1957.

It wasn’t until 1966 when the British Airports Authority took full control of the airport that Stansted really began its journey in becoming one of the busiest airports in the UK.

In 1978, the Government’s White Paper ‘Airport Policy’ proposed major expansion of Stansted. By 1980, the British Airports Authority submitted planning application to Uttlesford District Council to develop Stansted Airport and after a public enquiry lasting 258 days, the Government gave permission for it to be developed. Work for the site began in 1986.

From a Royal Air Base to A Commercial Airline Base

Once the new terminal was opened by Her Majesty, Stansted took off more then ever before taking millions of passengers to their holiday destinations all over the world. It has been particularly popular for many holiday charter flights that wanted to escape the higher costs associated with nearby London airports Heathrow and Gatwick. Most notably, low budget airlines, Ryanair and Jet2 use this airport as a base and operate a large number of flights out of the airport daily. Stansted now has the most European destinations of any UK airport and 2nd most in Europe behind Munich.

In 2013, Stansted Airport was purchased by the Manchester Airports Group (MAG) for an eye-watering £1.5 billion. Since this change in hands, the terminal has undergone an £80 million transformation along with an £11m upgrade to the Satellite One departures area.

Recovering From the Pandemic

Whilst current passenger numbers are as low as they were in 1994, Stansted faces a long journey to recovery once restrictions are lifted. Before the pandemic, the airport welcomed around 28 million passengers a year flying to almost 200 destinations. This compares to fewer than 50 routes and just over one million passengers when the terminal opened in 1991. Now, only a few flights take off from here a day under the Government’s strict lockdown rules banning all but essential travel.

In September last year, major UK airline Easyjet had to close their base at Stansted blaming the pressures of Covid-19.

Steve Griffiths, London Stansted’s Managing Director said: “While the modern Stansted has been at the forefront of the revolution in air travel over the past three decades, we currently face a crisis on a scale like never before. Passenger numbers are almost back at the same levels as when we first opened, but we know there is demand from the millions of travellers who start and end their journeys through our doors each year.

We can’t wait to welcome back our passengers to begin the next 30 years of London Stansted’s story, and we are confident the airport has a very bright and successful future once people are able to start planning for their well-deserved summer getaways.”

Despite the current pressures of Covid and how it is affecting the travel industry, this major milestone reminds passengers of what it was like to travel and gives hope to the future! Fingers crossed for another 30 years of success for this fantastic airport. What are your memories of Stansted Airport? Let us know below!

Turkey plans to welcome UK tourists without vaccines this summer

Read Article
Yesterday, a new COVID-19 variant was discovered in South Africa, known as the Omicron or the B.1.1.529 variant.…
Read Article
Perhaps the most light-hearted news to enter the aviation sector during these troubling times was the announcement about…