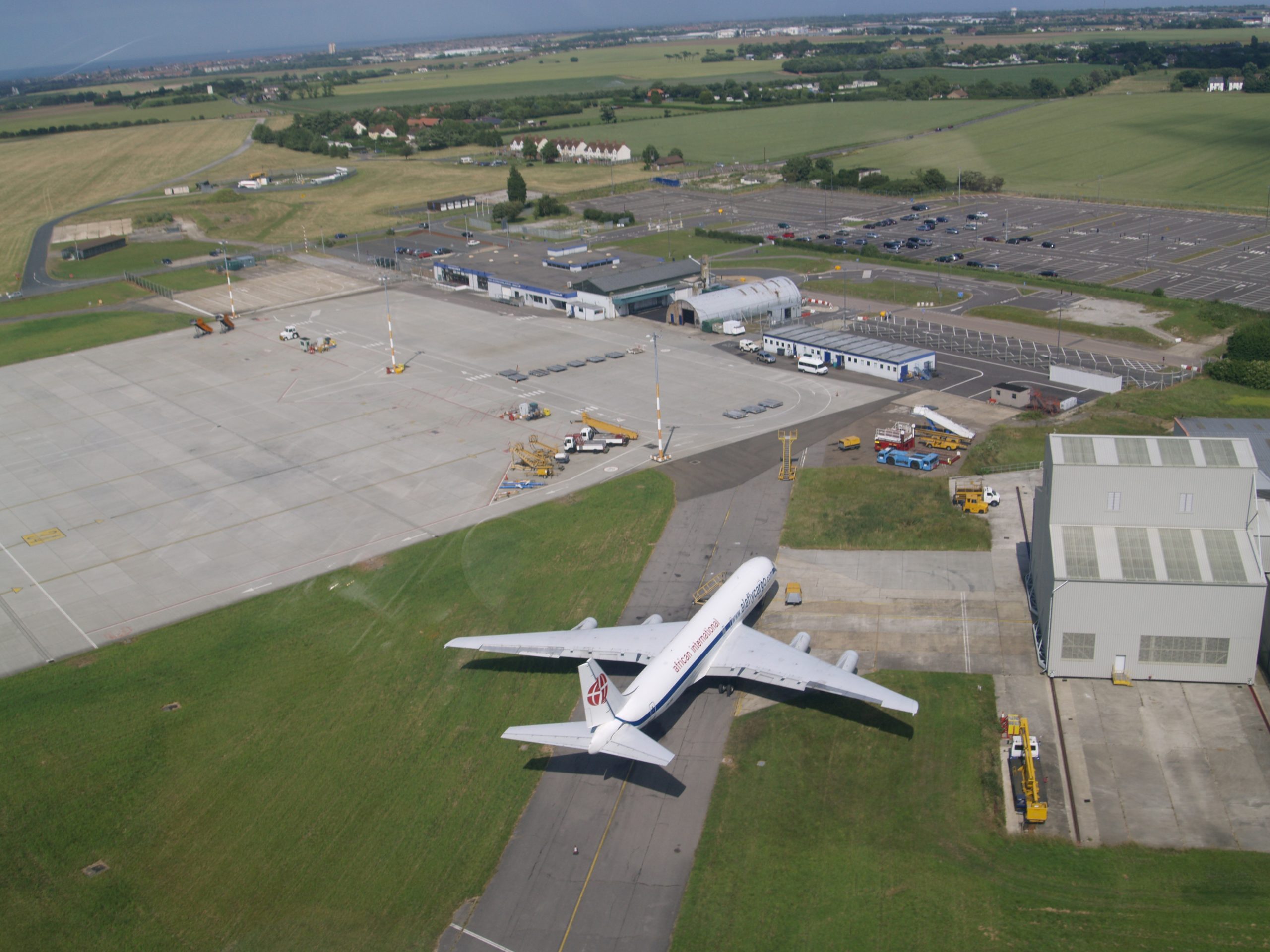 Home What’s Next For Manston Airport?

Built before both Heathrow and Gatwick, Manston Airport in Kent was once an international gateway to the world serving during both world wars and for many decades after. Now, the former aviation hub is merely used as a lorry park most recently for Coronavirus testing whilst the French shut their border last month. So how did it get to this point?

Over 100 Years of History

With all the uncertainty of Brexit and now Covid as well, the government have secured the use of this deserted airport as a temporary lorry holding park until June. But with over 100 years of history, Manston hasn’t always been a doomed airport. In fact once upon a time it was a flying business.

Up until its closure in 2014, Manston Airport was operating successful global cargo and passenger flights from its site nestled in the Kent countryside. As well as being a key base for the military.

It has the 11th longest runway in the UK and one of the widest runways in Europe.

Opening of RAF Manston in 1916

Originally known as the Royal Naval Air Station, the airport first became operational in 1916, serving it’s purpose as an airfield for sea planes.

The farmlands at Manston where the airport sits now became the perfect place for emergency landings and so the site developed into a permanent base as an all grass airfield.

With German raids happening across England, Manston based bombers were sent out to intercept. Five of the 15 enemy planes failed to reach the Kent coast, three were destroyed and the remaining seven returned back to Germany. Shortly after these formations, the Royal Air Force (RAF) was founded on 1 April 1918 and the airport changed its name to RAF Manston.

As the Second World War progressed, Manston became a key target to the enemy. During the Battle of Britain, it was severely damaged. An estimated 150 bombs destroyed two hangers, two Blenheim aircrafts and created 100 craters on the runway. Unexploded bombs also littered the airfield and one was even found in 2019!

Shortly after the bombings, Prime Minister Winston Churchill paid the airport a visit. Despite its extensive damage, the airport continued operations and later in the war, Hawker Typhoon attack aircraft were based there as well as the first Meteor jet squadron of the RAF.

Having run solely as a grass airfield, in 1944 Manston upgraded the site and built a new runway. In the first three weeks alone it had 56 emergency landings.

After the war, the runway was reconstructed, becoming 200 feet wide with a full-length parallel taxiway.

By the 40s, Manston had played a huge role in the success of both wars, but a new threat was looming. With the risk of nuclear bombs as the era of the Cold War began, Manston was used as a key NATO base. The airport was quickly upgraded to create concrete bunkers suitable for nuclear weapons and used by the United States Air-forces (USAF) as a strategic Air Command Base. The USAF withdrew from the airport in 1960 before returning back to the RAF’s control.

As well as playing a part in protecting the nation from attack, as the nearest RAF station to the channel and Europe, Manston was also a crucial base for the Air Sea Rescue (ASR) units.

The Airport’s Commercial Use

From the 60s, Manston become a joint civilian and RAF airfield operating the odd cargo flight.

In the summer of July 1981 another historical day was achieved for the airport. The first solar-powered airplane succeeded in crossing the English Channel and landed on the concrete runway of Manston Royal Airforce Base.

After the RAF’s gradual decline in operations, the site was bought by Wiggins Group in 1989.  It was renamed Kent’s International Airport and its new terminal was opened by Sarah, Duchess of York. From this point onwards, thousands of tourists began their journeys on seasoned summer flights to destinations including Yugoslavia, Greece and Mallorca.

After operating for over 50 years, it was decided to close the RAF base in 1999. Its legacy lives on in the museum based in the former Mechanical Transport Section hangars of the airport. This was a turning point for the airport as it was signed over to Kent’s International Airport for mainly freight and commercial use as well as some RAF training.

After, Manston began being used by a number of airlines and even had a daily schedule at one point sparking talks of an expansion.

However, there have always been doubts about the airport and its potential to expand. In 1993, A Department of Trade and Industry report found Manston unsuitable for development as a major airport because of its proximity to the town of Ramsgate.

Although the airport continued to support a number of international flights until 2013, it had managed to create a significant amount of debt and airlines had started to withdraw.

Ultimately, Manston failed to keep up with nearby competitors Gatwick, Heathrow, Stansted and London City Airport.

By mid 2014, the airport had changed ownership several times due to financial losses, sustaining a debt of £100 million and was forced to cease operations. Last year after 104 years at Manston, the RAF stopped training operations there. Now only reservists and squadrons remain at the unit.

Currently the only use for this former RAF base is for lorries. Most recently, Manston Airport hit the headlines after the closure of the border caused chaos for infrastructure across the county.

Operation Stack is a procedure put in place to park lorries along the motorway when services across the channel have been disrupted. With the uncertainty of Brexit, the government needed an alternative place for the overflow and Manston Airport was chosen. It has served as an emergency lorry park since 2015.

When the French decided to close the borders after the discovery of a new strain of Corona Virus last month, Manston’s lorry capacity was put to use. Over 5000 lorries parked up over a number of days and tested for the virus before crossing the channel.

The Future of Manston Airport

It seems that all that Manston Airport once achieved has been overlooked by its new found purpose for lorries. However, there’s still a glimmer of hope for the future of Manston reopening. New owners RiverOak Strategic Park (RSP) confirmed that the UK Department for Transport has granted a development order for the airport to transform into an international airfreight hub and passenger airport. Last year a legal battle was launched to fight this decision but the fate of this historical airfield is yet to be decided. If successful, RSP plans to launch in April 2023 and hopes to give East Kent a £300 million boost.

If nothing else, Manston boasts a huge amount of history since the First World War and has certainly served as more then just a lorry park.

What do you think should happen to Manston Airport? Let us know in the comments below!

Read More
United Airlines will add 400 flights to their summer schedule this July as they aim to operate 80%…
Read More
It’s fair to say that COVID-19 has taken its toll on the Aviation industry. There is an ongoing…