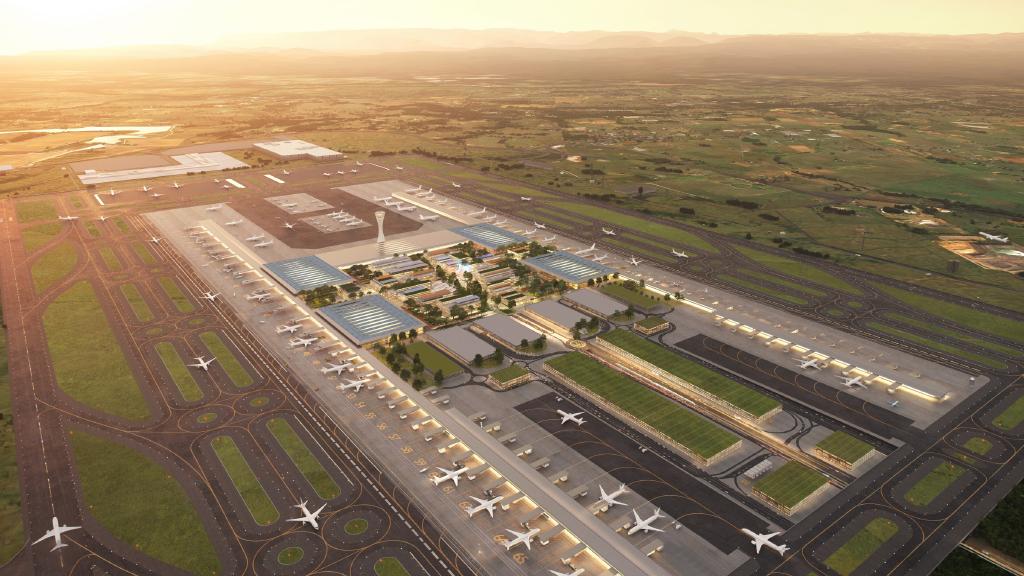 Today, Western Sydney Airport CEO Simon Hickey unveiled new runway plans for Sydney’s much anticipated second airport. The plans detailed the use of advanced technology that will be exclusive to WSA as well as room for continued expansion as demand grows in the near future.

Are you ready for take off?
We are excited to announce that the joint venture of @CPBContractors and @ACCIONA_AU will build the 3.7km runway at Western Sydney International.
With construction kicking off in 2022, Sydney’s new airport is one step closer! ✈️ pic.twitter.com/1RbQ2VEHDD

Western Sydney International confirmed CPB Contractors and Acciona together will build the newly announced 3.7-kilometre runway. Construction is planned to begin in 2022, keeping WSA on track for opening in the backend of 2026.

The Greater Western Sydney area continues to grow at an incredible rate. It’s one of the largest growing urban populations in Australia and is currently home to over 2.5 million people, nearly half of the Greater Sydney population. Such growth requires an adaptable, innovative airport, and WSA is building just that.

The new design features a multitude of smart technologies that Simon Hickey says will “safely get planes in the air or to the gates faster”. At 3700 metres long, the runway is marginally shorter than Sydney Airport’s 16R/34L runway, which is the longest paved runway in Australia, correct as of 2021. If this wasn’t enough, the entire airport, including the runway, has been built with expansion in mind. Keeping with WSA’s theme of sustainability, the runway will be future-proofed, taking emerging technologies into account, such as the possibility of regional electric aircraft.

Everything from the environment surrounding the airport to the hyper-futurist terminal design features green initiatives all targeted towards making WSA a net-zero carbon emissions airport. Even the runway will be built entirely out of recycled and reused materials.

Western Sydney Airport will have something that Sydney International Airport wish it did have. Combating one of Sydney’s most consistent air traffic disruptors, WSA will be equipped with a CAT III-B instrument landing system allowing flights to take off and land in thick morning fog. Sydney’s fog is most troublesome during the months of April through to July. Sydney International sees several major disruptions to their morning flight schedules every year due to low-lying heavy fog, which can reduce visibility to just 500 metres.

Our airfield has been designed with the latest technology, to get planes in the air, or to the gate more efficiently. When you travel to or from Western Sydney International, you’ll be on your way sooner and safer, whether that’s getting to a meeting, going on your next holiday, or driving home to your loved ones.

Around 3000 LED aeronautical ground lights will be used to line runways and taxiways. Rapid exit taxiways will ensure WSA runs efficiently while allowing more traffic through the airport. More than 40km of airside roads will be constructed, enabling multiple access points and ample manoeuvrability around the runway. In addition, 90 kilometres of power and fibre optic cabling will power the airport’s runway. With a 3.7-kilometre runway, WSA will be able to handle a full spectrum of aircraft models, including modern ultra-long-haul aircraft such as the Airbus A350-1000.

Western Sydney International will also be the only airport in Sydney equipped with CAP 3-B technology, which allows aircraft to operate safely in foggy conditions that currently shut down Sydney’s skies. This kind of technology provides passengers with confidence and certainty that fog will not affect their journey when they travel to and from western Sydney International.

Despite the tough Covid-19 pandemic lockdown imposed on several local government area’s in Greater Western Sydney, WSA promises to provide as many as 1200 new jobs. Minister for Finance, Simon Birmingham, is optimistic that this spike in jobs will help Western Sydney during a time where jobs are scarce in the region.

With the contract for these major pavement works now locked in, billions in economic activity can continue to progress and many more of the thousands of direct and indirect jobs set to be created from the project can flow at a time when stimulus in Western Sydney is more critical than ever, said Mr Birmingham.

The terminal is also due to begin its construction phase shortly after Multiplex was appointed to deliver the terminal earlier this year. The terminal has been designed by world-famous Zaha Hadid Architects and Sydney based Cox Architecture.

We are also on track to begin construction of the integrated passenger terminal at the end of this year, which will have the capacity to handle up to 10 million passengers a year when the airport opens in 2026, said Mr Birmingham speaking on construction progress at WSA.

Anxious residents of Greater Western Sydney, particularly those living in the Blaxland region, have been waiting to hear their fate since a community backlash over proposed flight paths in 2015. However, residents are becoming increasingly frustrated at the lack of news on the proposed routes despite receiving an update on July 14th 2021. The update outlined that no flights will converge through a single merge point over any residential area, while flights over noise-sensitive facilities and residential areas will be “avoided as much as possible”.

If you can plan the runway then you can tell residents the flight paths!! Instead you treat the communities that will be severely negatively impacted 24hrs a day with contempt pretending like we should be grateful for this toxic disaster been dumped on us!

Blue Mountains Mayor, Mark Greenhill, believes the fact sheet continues a culture of secrecy around flight paths. In a statement, Mayor Greenhill suggested the government is delaying the release of official flight paths so that they can say it’s too late to go against them.

WSA is on track to open in late 2026, with construction on the runway and terminal beginning next year despite angry residents still raising questions about the Airport. Have you been affected by WSA’s build?

Read More
Forty years ago, flight TE901 left Auckland for an 11-hour sightseeing trip to Antarctica with 257 people on…
Read More
Beauty is in the eye of the beholder, a phrase commonly used on a first date or a…
Read More
AIM Altitude, a leading supplier of air cabin interiors, has announced that they are to close a firm…