The Effect of Music on an Airplane

You may have noticed music playing in the background as you board a plane. But were you aware that that piece of music was crafted and created for that particular airline?

There’s something about a theme tune that makes you more aware, more attuned to the experience of a journey. Take Singapore Airlines for instance who, to entice a new sea of passengers, curated a new composition called the ‘Symphony of Flowers’ for its boarding music/theme tune to accompany its new Batik motif, that is embodied in their renowned Singapore Girl. The question is why?

A theme tune represents a show, programme, company etc. In a matter of minutes, you can be transported to a different world – one that is far different from the one left behind. Disneyland is an apt example. There are different theme tunes for different corners of a world that is basked in hyperreality. There is whimsical and robust for Main Street USA, dreamy and wondrous for Fantasyland, exotic and upbeat for Adventureland (featuring instruments like the marimba, whistle, and African drums) etc. Each yielding a sense of adventure, a time unknown.

This is on par with the music used for each respective airlines, for each carrier comes to represent their country of origin and so they reflect this through the use of food, amenities, and even through music.

‘‘if flowers could speak, how would they sound?’’ 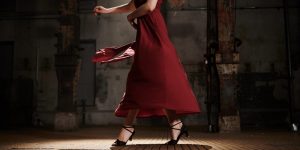 Austrian Airlines says the Waltz ‘‘has always stood for Austrian culture and Austrian’s close ties to its home country’’ and it ‘‘accompanies our passengers around the entire world.’’ That essentially, if you stray too far away from home, you can touch base again with your carrier through the music that is played and composed.

Or there is Singapore Airlines with its Symphony of Flowers – ‘‘if flowers could speak, how would they sound?’’ asked curator, Dominic Murcott. The question is obviously void of sense but what we cannot fathom, we must hear and imagine. By drawing inspiration from the ten Singapore flowers, their movements, and the Batik instrument, they have provided us a unique composition, one that reflects the airline’s brand and image appropriately.

So what it the purpose of using music for passengers boarding a plane?

According to Dr Hauke Egermann, a music and emotions researcher, there are four explanations as to why music evokes emotions within us. In a Ted Talk, he suggests that this is caused by: learned associations, that music is associated with cultural context causing us to respond; musical expectations from our knowledge of compositions, that is musical patterns we have remembered and absorbed; expressive emotional movement, that we believe a tune sounds happy for we associate it with movement and energy; or music activating sound which speaks to our sympathetic nervous system, creating attention to the sound and inevitably movement. In sum, music heightens our senses, stimulating us to think and respond, much like the different corners of Disneyland, and this is the main reason for why airlines use music before the start of a flight.

Singapore Airlines’ Symphony of Flowers corresponds to two of Egermann’s mechanisms. As the piece was created to match the Batik motif and Singapore’s flowers, this in turn will cause learned association for passengers to associate the music with cultural context. But it also corresponds to the theory of music activating sound for the melodies mirror the flowers’ movements by their way of budding and blossoming.

Similarly, Austrian Airlines’ Waltz fits all four theories for it enables passengers to associate the Waltz with the context of pleasure and entertainment, but also, quite like the Symphony of Flowers, movement. Although it is hard to move whilst strapped to a seat onboard a plane, it nevertheless arouses passengers to want to move, to dance, to feel close to the airline’s country of origin and destination in situ. That alone is enough to evoke nostalgia and a pleasurable flight ahead.

Can you think of any other boarding tracks which fits in with Egermann’s proposal on music and response? Let us know below.

Why are Airplanes Designed for Smoking When it is Prohibited?

Are Smart Trays the Future of Airport Security?