When I fly, it is often to fly home, my second home that is in Hong Kong, a place that renders identity and culture that is often associated with Asian food – food that Asian airlines like to replicate in lieu of home-cooked meals.

Each time I take my seat, next to the window, awaiting take-off, awaiting flight, I stare out into the cold unknown of what my journey home may entail: turbulence, delays or worse waking up to a cold packaged sandwich. But what often brings me back from thinking the worst is the amenities I receive onboard a plane, amenities that make the journey more enjoyable, more homely. For instance, the choice of in-flight entertainment that is associated with the destination in-situ, such as films and music starring Asian movie stars, the cabin crew who speak my native language, and of course the in-flight menu with dishes aptly infused with Asian flavours, drawing me closer to home…

I have often noticed how airlines plan meals related to a destination, either the airline’s locality or the place it is to arrive at.

Recently, Singapore Airlines announced their making of a range of meals in a box for their economy line: ‘‘With over 40 newly-created dishes, including our comforting congee and gravy-rich mee siam, you can savour delightful new main courses even if you fly to the same destination multiple times a year.’’ Yet ‘created’ would be used to describe the act of producing and improving, rather than inventing, for they are foods we can find in Asian homes and restaurants. Such foods include mee siam, laksa, along with two staple classics found in dim sum parlours, pan-fried carrot cake with prawn and as mentioned ‘comforting congee’ accompanied with a century old egg, a home-made broth that is often made when one needs to warm up on a winter’s day. 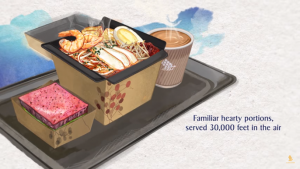 Within a week, Vietnam Airlines introduced a ‘‘new’’ Vietnamese favourite: rice with fried pork and vegetables, available to those in economy class for flights lasting over 1 hour 30 minutes. Malaysia Airlines (MA) too offer their country’s favourites onboard: nasi lemak with shrimp sambal (a Malaysian classic), chicken satay fried rice, or chicken rendang to name a few – but only for passengers travelling on an eligible MA flight that is an operated international service. In this regard, airlines see food as an amenity, one that is desirable for the lengthening of time to stimulate the senses and in turn connecting culture to flight.

But what I have found the most interesting is how an item of food can be synonymous with both an airline and passenger experience, for instance, the Cup Noodle.

Most of you who fly Cathay Pacific will know what I am talking about – that risqué feeling of asking for a Nissin Cup Noodle past dinner hours; pulling the lid back to a steaming cup of soup with crab meat and sweetcorn floating on top; inhaling the portion of soft, yellow noodles and drinking a full cup of MSG without a care in the world.

Nissin’s Cup Noodle is a household item we reach for as a snack, for lunch, or whilst watching Korean dramas back-to-back – so I guess it is apt that the snack is served to you when home is seemingly far away. Type in ‘Cup Noodles and Cathay Pacific’ into a search engine and approximately 90,500 results show up, along with thousands of images of the Cup Noodle placed on tray tables – this being on almost any review that you will come across, the SEO keyword being ‘free’. Indeed, Cathay Pacific has a dedicated article on how the Nissin Cup Noodle evokes a ‘taste of home’ on their webpage. 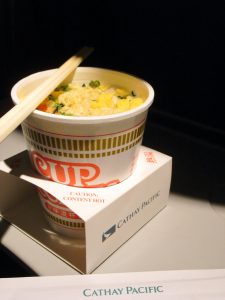 So what is it with airlines replicating dishes that we eat at home? Perhaps it is because a plane is not a house or a home, neither is it a building but a mode of transport, although a mode that is unlike any other for we are approximately 36,000 feet high from the ground, but to make it feel more homely, more normal, they draw us in with amenities such as home-styled food – at once evoking the schema of home, culture, and identity. Through use of nostalgia, food draws people like me back home or for those visiting as tourists to explore a destination still further. A notion that I happily fall fool for each time…

Has airline food ever made you want to discover a culture even more? Do let us know in the comments below.

Editorial Assistant for Travel Radar: She is experienced at taking creative, analytical approaches to topics pertaining to e.g. the creative arts, travel and aviation.