Why are Airplanes Designed for Smoking When it is Prohibited?

Many of us know that smoking is prohibited on planes. However, why are there ashtrays in the lavatories and smoking signals inside? Read on to find out more…

Why is smoking harmful to the aircraft?

Well, in order to light a cigarette, you need fire, which is a threat to the aircraft. It may even cause the airplane to catch fire, which could lead to a fatal ending.

Has a crash ever been caused by passengers smoking onboard?

The short answer is yes. On 11 July 1973, Varig Flight 820 was forced to make an emergency landing near Paris’ Orly Airport after a fire was reported in the rear lavatory. Sadly, only 11 out of the 134 passengers on board the Boeing 707 survived. Most of the passengers passed away due to smoke inhalation or from impact during the emergency landing. Out of the 11 survivors, only 1 of them was a passenger, with the others being cabin crew members. During investigations, it was discovered that the cause of the incident was a cigarette that was left behind lit in the trash bin.

Yet even though smoking is strictly prohibited on airplanes, ashtrays are still kept in airplane lavatories because there will always be somebody who disobeys the instructions regardless. 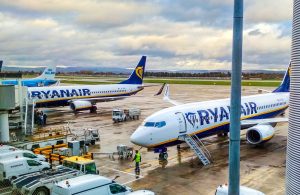 When was smoking allowed on airplanes?

In the early 1960s and ’70s, smoking was very popular on airplanes. However, once the ’80s came around, the amount of smoking-related airplane incidents increased. This convinced many airlines that smoking on airplanes was dangerous, so airlines started banning smoking on board one by one, until in 1988 when every airline had banned smoking for good.

Why are there still smoking signals on airplanes?

Ever noticed the smoking signal next to the fasten seat belt sign above you? If smoking is banned on all airlines, what is the use for it anymore? Firstly, most of the aircraft operating in the skies are from the 1970s or 80s (when smoking was still allowed on aircraft). Since it will cost a hefty sum to remove all of the no-smoking signs, airlines have decided to leave them as they are. Secondly, the sign is there to remind everyone that smoking is still prohibited on airplanes. However, why do new airplane models still have them? The answer is for tradition. Since almost all of the aircraft flying today have these signals, it is almost tradition to have them on board.

What do you think about these signs? Comment below.

The Effect of Music on an Airplane

The UK says farewell to the Traffic light...