SMBC Aviation Capital are a global leasing company that specialises in maintaining, refurbishing, and leasing aircrafts to airliners, which can be convenient when airliners experience periods of financial instability, shortage of planes, or great for aiding start-up airliners such as JetSmart. Yet to do this, SMBC must first buy aircrafts to lease or to hold from manufacturers such as Boeing.

The Return of The Max

On May 25, Boeing announced SMBC’s purchase of 14 additional 737-8 Max aircrafts, the single aisle carrier known for its ‘‘fuel efficiency’’ and ‘‘flexibility’’ amongst other things… 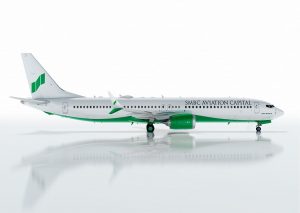 [”We are honored by @SMBCAVIATION’s trust in the 737 family, and look forward to partnering to support airlines for the market recovery ahead.”] | © [Boeing]

Peter Barrett, CEO of SMBC Aviation Capital, says, “We are pleased to have concluded an agreement with Boeing for the purchase of [the …] MAX aircraft which is an aircraft we are seeing increased customer demand for following its successful return to service”.

This ‘‘return to service’’ speaks of the tragic events that occurred back in October 2018 via Lion Air and again in March 2019 via Ethiopian Airlines whereby the plane crashes killed hundreds of people. According to Vox, these tragic events stemmed from Boeing’s bid to outdo its longstanding rival Airbus and the threat of its A320neo which featured a new and improved engine. With this, Boeing updated their engines, placing them on their 737 model and moving them higher on the aircraft’s wings to solve the problem of its low body and nose, whilst relying on sensors (via MCAS) to prevent the engines from thrusting the nose upwards. However, as seen in the two major incidents, unreliable sensors caused the plane to nosedive to the ground.

The grounding of the Boeing 737-8 Max led Boeing to investigate and improve on their initial failings. A new batch of 737-8s appeared back in April 2021 yet there was cause for concern with the electrical devices, leading some to be grounded once more. However, since then, Boeing has pledged to rework and refine the 737-8 Max to ensure safety and trust in both the aircraft and the company. In an official response they state:

We have taken a number of actions to further enhance the safety culture of our company. These actions include:

But the A320neo is no stranger to accidents for it too has been involved in numerous accidents, for instance in 17 July 2019 an emergency landing was called upon due to a lack of fuel and in November 2019 when the plane suffered a runway excursion at Bengalaru Airport.

Yet on 31 May, SMBC announced that they were also delivering an Airbus A320neo equipped with two CFM LEAP-1A26 engines to Aeroflot, suggesting that the lessor supports both manufacturers equally.

However if we look at SMBC’s portfolio for comparison, we see that there are 270 A320neos for lease, whilst there are only 121 737 Max aircrafts. Prices wise the former lists for $110.6 million each, whereas the latter lists for $121.6. Perhaps this is one of the reasons why the A320neo is in higher demand.

Given the aircrafts’ similarities in build, airliners will be using either/or when operating short-haul international and domestic flights. But there still seems to be an air of uncertainty around the Boeing 737-8 Max which is attributed to the incidents mentioned above, even though there have been fatal errors produced by both Boeing and Airbus respectively. Indeed it would be difficult for passengers to avoid boarding the 737-8 Max, for many airliners currently fly it including: FlyDubai, United Airlines, and Ryanair to name a few. One can only follow SMBC’s example, that is having faith and moving forward.

Which aircraft is the best in comparison? The Neo or the Max? Let us know below.

Editorial Assistant for Travel Radar: She is experienced at taking creative, analytical approaches to topics pertaining to e.g. the creative arts, travel and aviation.