The pandemic had a detrimental impact on the whole of the aviation sector and covid-19 restrictions forced event organisers to cancel or postpone many popular air show events until further notice. However, there’s exciting news for aviation enthusiasts! After an almost two year absence, The Red Arrows are back! 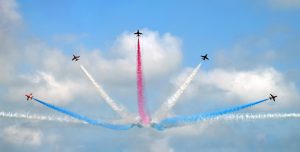 The Red Arrow decorate the skies with a display of red, white and blue

The 2021 season got off to a flying start last week, taking off from the Midlands Air Festival on 4th June at the stunning Ragley Hall Park & Gardens in Warwickshire.

The Red Arrows Royal Air Force aerobatics teams, formed in 1965, are one of the most legendary and recognisable air displays in UK Aviation history. Known for their elaborate displays and daring manoeuvres, flying in perfect unison and precise formations. Crowds were wowed by an impressive 20 minute spectacular display, decorating the skies with their signature streaks of red, white and blue. 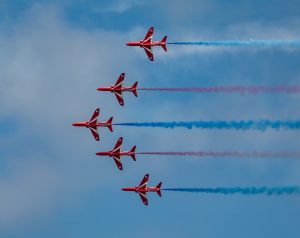 The Red Arrows flying in unison at an air show display leaving a trail of red, white and blue

During the Pandemic the Red Arrows stayed busy, performing several significant flypasts to mark the 75th anniversaries of VE and VJ Day. The elite team also made a brief appearance last year and could be seen flying above the skies of London, when they joined forces with Patrouille de France for a fly past over Buckingham Palace, to honour 80 years since the historic broadcast by Charles De Gaulle, appealing to the French people to stand together against the Nazi occupation and lead to the formation of the French Resistance. Most recently, The Red Arrows carried out pre-training in Greece to perfect their routines in preparation this years air show display.

Red One, Squadron leader Tom Bold said: “This is the culmination of several months of hard work and everyone’s dedication to the task has brought us to this point, whether they be fellow pilots in the team or our highly-trained support staff.  Being my first PDA as Red 1, I feel incredibly honoured to have led the team to this point and to now have the opportunity to present a new show – featuring all the energy, excitement and excellence that airshow audiences expect and enjoy.”

With the lifting of restrictions, audiences from across the UK can once again gather to enjoy these spectacular air show displays. The 2021 season will see the Red Arrows perform at 13 airshows in the UK and Europe. Dates and displays may be subject to change.

For your chance to catch a glimpse of these flying superstars, here is a schedule of upcoming Red Arrows air shows.

Will you be visiting one of the The Red Arrows airshows? Let us know in the comments below.