Low-cost carrier easyJet has opened a new seasonal base at Malaga-Costa del Sol airport. This new base increases the airline’s presence in Spain, adding to its two existing bases located in Barcelona and Palma de Mallorca.

EasyJet will base 12 aircraft in total in Spain. It has more than 400 employees in the country, with the new base creating around 100 new jobs. All staff members are employed under local contracts.

The opening ceremony featured a traditional arrival of an easyJet plane, ribbon cutting and a round table discussing how to reinvent tourism. Javier Gándara, Director of easyJet for Southern Europe commented: “With more than 36 million passengers carried since 1999, Malaga was until now the most popular destination of our network where we didn’t have a base. Despite a challenging context for the sector, we believe that opening what will be easyJet’s second Spanish seasonal base in Malaga – and the third in the country – is an opportunity to expand our operations in Spain, where we are the fourth largest airline.”

“With Europe progressively reopening for tourism, we know that there is pent-up demand for travel, and we retain the flexibility to ramp up quickly our operations to meet that demand and a seasonal base provides us with a solution that perfectly fits with the needs of the market, constituting another example of an innovative initiative that makes our business model even more efficient.” 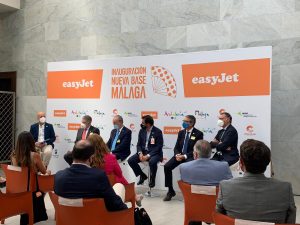 Spanish authorities have evaluated how the region can benefit from the new base. The Secretary General for Tourism, Manuel Muñoz, noted that ‘the fact that a company that moves a volume of travellers as high as easyJet has opened a new base in Andalusia in the current context demonstrates the strength of the community and that of Costa del Sol as a destination, and the confidence it generates in one of the main airlines’.

Working with the community

EasyJet has been working with the local community in Andalusia since October when it announced the new base. This work has included arranging an aviation class at Los Olivos School where easyJet crew members explained to preschool children how airplanes fly, and arranging a “Catch your flight” contest, which was a treasure hunt of five flight tickets hidden across the city.

The offer of air seats to the Malaga Costa del Sol destination for trips from June to September is close to four million, standing at 3,429,077 seats. This figure represents a growth of + 101.6% compared to the same period of the previous year and an increase of 1,700,000 seats. EasyJet has a lot to say about this increase, which is one of the three companies that offers the vast majority of flight seats from June to September 2021.

Is it Time for a Travel Corridor Between the US and the UK?