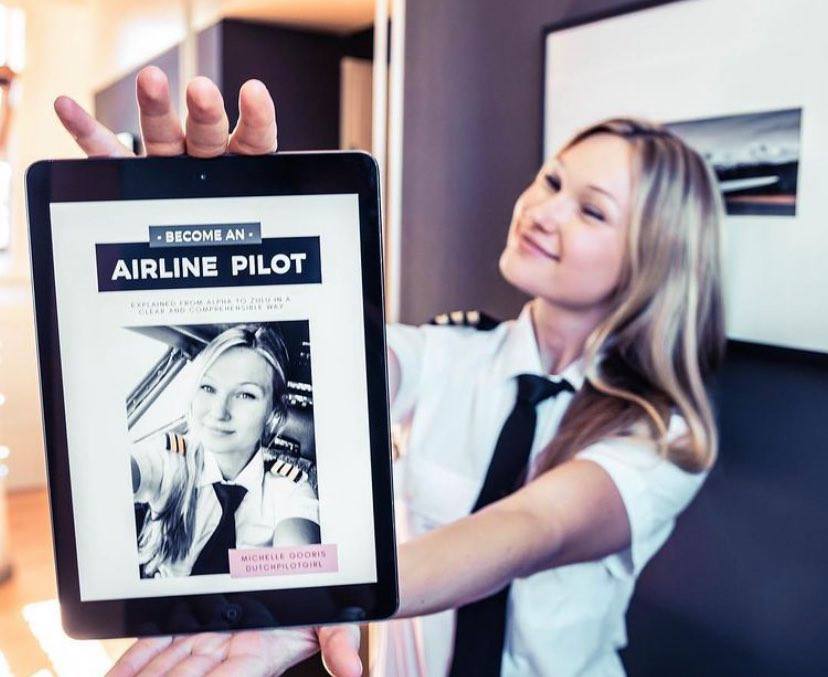 Woman warrior and YouTube sensation Michelle Gooris is not your average girl. Dutch Pilot Girl as she is known online, exploded on the scene back in 2017 when her awe-inspiring story and YouTube channel broke out into mainstream media. Since then, she has produced an E-book (more on that later), gained 244’000 followers on Instagram, 30’000 on TikTok and 211,000 loyal fans on YouTube. Michelle has also gone onto create her own App called “PreFlight“, designed to be an all in one pilot’s guide and digital handbook.

Her mission is simple, to shed some positive light on the aviation industry, unwrap common misconceptions and inspire the future generation of aspiring pilots. She not only inspires females but males too by using her own experiences to paint an accurate picture of the aviation landscape through her incredible personable delivery. I’ve spent hours watching Dutch Pilot Girl’s channel and I would be lying if I said I wasn’t tempted to take up flying! However, if her charisma on YouTube wasn’t enough to convince you, her incredible travel snaps on Instagram will be sure to sway you.

A pilot, that’s something I never thought about

Michelle Gooris was just 16 years of age when she started looking around schools, deciding ultimately what she wanted to do in her life. She visited a number of schools, including medical schools, all to no avail. Struggling to find her passion in life, her grandad suggested she became a pilot. She met this suggestion with a confused reaction. A pilot? That’s not a woman’s job? That’s a man’s job, like going into the Marines? However, due to a mix of desperation to find a passion as well as her natural curiosity, she took her granddad’s suggestion seriously. She set

about finding pilot schools in the Netherlands and visited several. The more schools she visited, the more she fell in love with the career before deciding, “this is what I want to do!”

In the video Gooris made, titled “My Story: How I became an airline pilot”, she explains how her journey began after selecting a school that was “right for her.” After passing the selection process at CAE Oxford Aviation Academy, she went on to do ground school (theory study) for 8 months in Amsterdam, near her home. Upon completion of the highly intense theory course, she went to Arizona for the next part of her pilot training. The CAE network have schools all around the world which allows for pilots to experience different cultures, meet new people and learn in varying conditions which is an invaluable experience. “Dutch Pilot Girl” went on to complete her study’s in Oxford, England after a brief spell of time in Belgium. She graduated in 2013 and has ever since been a qualified pilot!

For two years following her graduation, she was unemployed as a pilot due to the volatility of the industry at the time. She then landed a job with budget airline Ryanair where she racked up 500 flight hours before moving to a small charter company based Palma de Mallorca, where she currently works. Ever since she has been a role model to thousands around the world thanks to her transparent, inspiring content online.

Gooris believes there should be more women in aviation

It was once a man’s world and although there are many female pilots today there are nowhere near enough. There needs to be more, in a manly environment we should show men that we can fly to. We can all achieve anything we want in life and I can’t wait to see where else my job takes me. – Michelle Gooris speaking to the Mirror in April 2017

In a recent YouTube video, Gooris spoke about some of the struggles females face when pursuing a career in aviation. She says that while she doesn’t want to say it online, she definitely thinks its harder for women to become pilots. Continuing the theme of International Women’s Day this week, I explored why gender norms and stereotypes leave women on the backfoot in

aviation. It makes no logical sense to assume a women cannot do as good a job, if not a better job than any male in the industry. Michelle Gooris has definitely made that point and she continues to make waves proving toxic masculinity is rife in aviation. In her video, she said that once she signed her first contract, she was never treated differently for being female. By Contrast, everything leading up to that moment made her feel as if she had to prove herself from theory to pilot training. It’s not like trying to prove you are good at what you do, it’s more like trying to prove that you deserve to be here as well. So while the industry has come a long way, it’s still not perfect!

She goes on to voice her concerns for female pilots and pilots in general after the pandemic. She has reason to be concerned too with many airlines continually announcing staff cuts to “save” money during the pandemic. Once travel resumes and plane come out of storage, it’s likely that male pilots will be the first to be rehired, ahead of female pilots. It’s a sad fact but this is mostly due to airline seniority rankings as explained by Olivia in this article. However, the only way to ensure more women become pilots or aviation professionals is by reducing the Male to female ratio in the industry. It’s no secret that pre-pandemic, Asia had an enormous pilot deficit that needed filling and as soon as travel returns to its normal levels, it’s likely we will see that demand return. This could be the break that aviation needs as female pilots are on the rise in Asia. So much so that India has the largest percentage of female pilots in the world, at 12%.

Flying a DA40 Diamond in her first solo flight, the video she posted on YouTube in 2014 has now amassed over 6 million views which is nearly half of her total views on the platform. The video shot “Dutch Pilot Girl” straight into the spotlight where she has since been inspiring thousands to pursue their dreams. Many comments under her numerous videos are of people who attribute her story and social media as the reason they started flying. A true modern-day aviation heroine.

Dutch Pilot Girl has an E-Book on this! Yes, I know everyone and their mum has an E-Book these days but I can first hand assure you it’s the real deal. On her E-Book, she said;

I received over 1000 questions in my ‘DutchPilotGirl’ mailbox from people asking me everything about becoming an airline pilot. I decided to write an eBook which contains everything you need to know and be aware of when you want to become an airline pilot. During the last years it became apparent that it’s loved by many!

Gooris has thought of everything in this E-Book from the requirements and medical certificates through to the practical elements such as costs, way of life and what to expect from the training itself. You receive tips and tricks for every exam you will ever face, Maths and physics help as well as curriculum vitae and cover letter advice because once you have qualified, you’re going to want a job! It’s a small investment that will provide you comfort and knowledge when you embark on the most rewarding adventure of your life.

After spending a couple of years in the aviation industry, I learned that taking responsibility, motivation and perseverance are key factors when it comes to achieving goals. With the right mindset, you can achieve anything in life, really! The road towards it will make you a stronger person. – Dutch Pilot Girl (Michelle Gooris)

From one incredible women to the next, later this week I dig to the bottom of Russia’s female pilot deficit and attempt to find out what can be done to change the working female perception. Are you an aspiring aviator? Travel Radar would love to hear from you in the comments.

New Travel Form Imposed for UK Travellers: Everything You Need to Know to Avoid Fines

Newquay Airport in Cornwall to Resume Flights this Month

Read Article
Canadian aviation industry leaders are coming together to form the Canadian Council for Sustainable Aviation Fuels (C-SAF). In…
Read Article
Today is the last day we ever fly in an aeroplane. Climate change is now irreversible. People will…