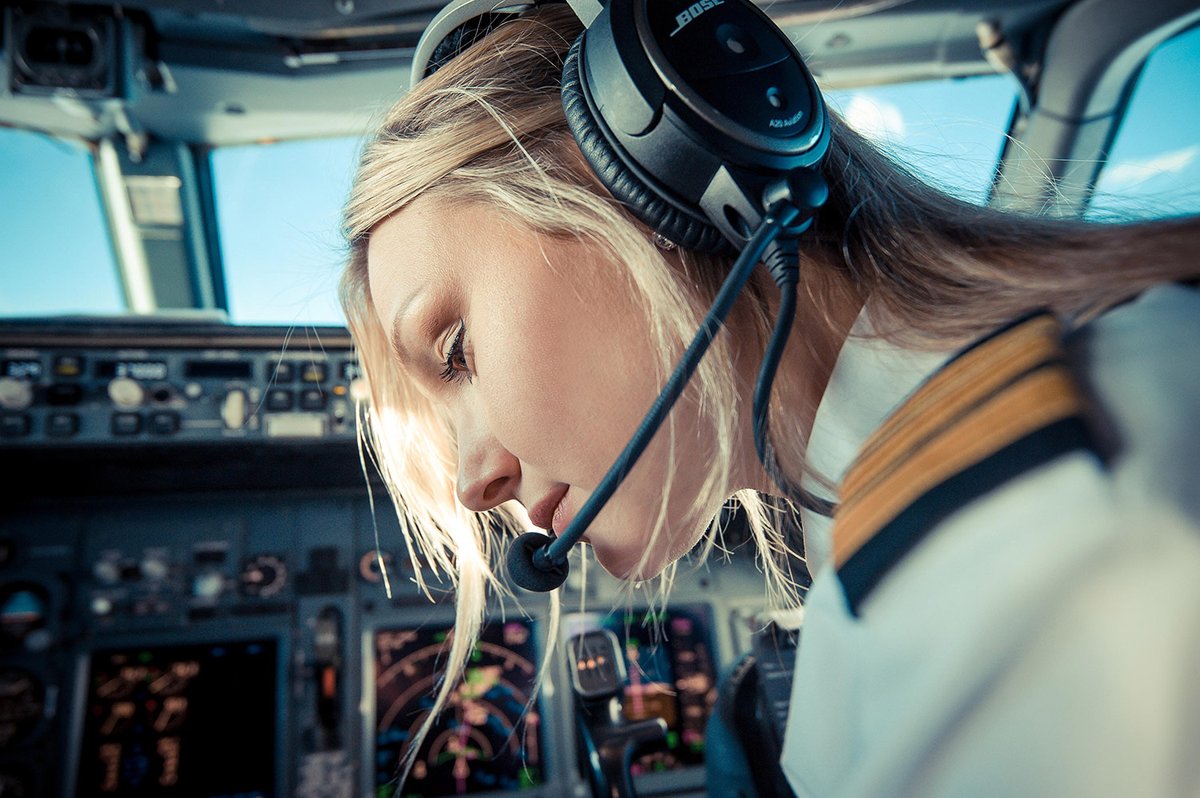 Women run the world, it’s no secret. So why is aviation still an unequal minefield for ladies to navigate? This International Women’s Day, Travel Radar explores the past, present and future of women in aviation. In this special article, I look into the female pioneers who shook the industry and the females who are running the industry today. I also explore why more and more females are choosing a career in aviation and what aspiring women can do to start their venture in aviation. Expect words from “Women in Aviation Australia chapter” president Jessica Hayler, where she talks about the increasing opportunities for women in aviation.

It all began in October 1909, when a passionate young Raymonde De Laroche enlisted her friend Charles Voisin, a French aviator and plane builder, to instruct her in how to fly. On 22 October 1909, de Laroche visited the Voisin brothers’ base in Chalons, 140 kilometres east of Paris. Back in 1909, trainer aircraft meant flying something the French called “rouleurs” or “penguins”. Voisin’s aircraft could only seat one person so De Laroche flew the plane while Voisin instructed her from the ground. After mastering taxiing around the airfield, de Laroche lifted off and flew for around 270 metres before touching back down. This feat meant she became the first-ever woman to pilot an aircraft. Fittingly, on the 8 March 1910, today known as International Women’s Day, de Laroche became the first woman in the world to receive a pilot license. The pioneer went on to attend aviation meetings, events and shows around the world, which were entirely male-dominated of course.

While de Laroche will forever be remembered as the first female pilot, many forget the role Katharine Wright played in aviation pioneers Wilbur and Orville Wright’s success. Wilbur and Orville, of course, went on to change the world of aviation forever, however none of it would have been possible without Katharine’s support. She helped them by funding their visions through a bicycle shop, she found them teachers and followed them around the world. She went as far as learning French to converse with people in France as her brothers were notoriously shy. She became the glamorous “spokesperson” and some would refer to her as the third Wright brother.

The angel of the Outback

Australian trailblazer Nancy Bird-Walton became the youngest woman to gain a pilot license in Australia, at just 19! At 13, Nancy, like most young Australians during the Australian depression, left school to help her family. However, by the age of 17, she was more determined than ever to see through her childhood dream of flying. She joined the Sir Charles Kingsford Smith (CKS) pilot school in Sydney. CKS was famously the first man to fly over the Mid-Pacific and had the honour of Sydney’s international airport named after him. While Bird-Walton wasn’t Australia’s first female pilot, she was the first woman to obtain a commercial license two years later. She brought a plane, a Gypsy Moth, with some inherited money from a great aunt as well as some help from her dad.

Nancy, however, is possibly most famous for her involvement in what today is known as Australia’s Royal flying doctor service. She met Stanley Drummond in 1935 and he asked Nancy to help set up a remote air ambulance service based in Bourke, New South Wales. According to the Australian Museum, she used road maps for navigation and made many landings in paddocks littered with dangerous rabbit holes. Incredibly, she never had an accident in all of her flying career. Nancy went on to found the Australian Women Pilots’ Association in 1950,  remaining president until 1990. Her legacy will forever be immortalised upon the completion of Western Sydney Airport, to be named after her.

There are too many incredible women in aviation to mention in just one article. I could go on for decades, from Maude Bonney, who broke both male and female records to Sabiha Gökçen, the world’s first female fighter pilot. Maude Bonney is a prime example of the early struggles females faced in aviation. She learned how to fly in private until her husband found out. However, Bonney then followed her passion with her husband’s support and became the first woman to circumnavigate Australia, spending 95 hours in the air while surviving a collision mid-journey. Bonney also went on to become to first woman to fly from Australia to England. A tropical storm saw her self-modified plane crash into an island off of Thailand but she reached England two months after she set off.

We’re living in space age times with stone age minds – Gavin de Becker. I first heard this quote through Blues Musician Daryl Davis on the Russell Howard show speaking about his encounters with the KKK. This is a quote that has stuck with me ever since, and it’s just as relevant when talking about the stereotypical thinking that has inadvertently suppressed women in aviation for over a century.

Toxic gender norms: Boys and their toys, girls and their dolls. It may seem so trivial that what we play with as kids go on to fuel the very gender stereotyping that labels men as “leaders” and women as anything but leaders. “Men are stronger and therefore more capable than the weaker sex”, a shocker of a statement huh? Well, Akbar Al Baker, the chief executive of Qatar Airways, said as much in July 2018 during a press conference. Speaking of his position as CEO, he said “Of course it has to be led by a man because it is a very challenging position.” Mr Al Baker also went on to deny that poor gender representation was an issue in aviation. It’s like poetry in motion, only it’s a very sad truth and the truth is that women are unjustly thought to be less capable.

Despite the nonsense that surrounds women in aviation, big waves are being made in the industry and no one is more passionate about the future of female aviators than Jessica Hayler. Jessica is the National President of the “Women in Aviation Australia Chapter“. I reached out to Jessica on International Women’s Day to find out why women should consider a career in aviation and how aspiring women can get involved.

There is no limit to the opportunities available to women in the aviation industry, however, that is not to say that there are no longer any barriers and challenges that they face due to bias and stereotypes which still exist today. Aviation is a dynamic and exciting industry offering many different career opportunities for women. Beyond the more familiar roles of pilots, cabin crew, ramp operators and aircraft engineers, there are also roles in logistics, aviation law, university lecturing, training, and airport planning……Just to name a few!

Many feel discouraged chasing careers in aviation due to the high costs of tuition. However, funding is available through various grants and schemes depending on which avenue you choose. Many aviation careers, despite popular belief, don’t even require a university degree.

The great thing is not all roles begin with a university degree. Often there is the opportunity to obtain industry specific qualifications or experience once you are in a particular role. If you are thinking about a career in aviation, but feel hesitant and unsure on the pathway, we recommend you reach out to women in the industry – your uncertainty will clear up straight away. This can be done through the various networking/support organisations such us as – Women in Aviation Australian Chapter or, Australian Federation of Air Pilots, Women in Aviation/Aerospace Australia, flight deck consulting or any of the various training institutes and universities.

And no matter where you are in the world, some bodies and organisations will be able to assist you or guide you in the right direction. Most notably, Women in Aviation International is a great place to start.

If you are interested in learning more about the different careers and pathways, then we invite you to check out our Aviation “Careers Guide” which features 37 incredible women working in various and expertise in the industry. – Jessica Hayler

For International Women’s Day, WAI Australia are collaborating with Airservices Australia, Jetstar, Qantas and Qantas Link to launch 26 all-female flights to highlight the diverse range of aviation occupations open to women. An event not to miss is the flight of the day, with a special callsign in honour of Amelia Earhart “Qantas Earhart 922.” “This incredibly special flight will be escorted for departure by four female fighters working for the ARFFS. Additionally, with female air traffic control staff on shift for its clearance, taxi and take-off, there will be female voices on both sides of the radio.” The flight departs at 0905 on International Women’s Day from Sydney on-route to Cairns.

The future of female aviation is very, very bright. Pictured above is the crew which performed the first all-female crewed flight in Afghanistan’s history, onboard a Kam Air flight. The flight took place at the end of February this year and was documented by YouTuber Josh Cahill as seen in the photo above.  With the inevitable resumption of the aviation industry later this year, emerging in a hopefully Covid-free world, I hope to see even more women in aviation. As it stands, just 5.18% of commercial pilots are women. In the UK, that number is significantly lower. However, this is changing and in a follow on from this special International Women’s Day article, I will explore the female aviators of tomorrow. From Dutch pilot Michelle Gooris to Ekaterina Telepun, one of Aeroflot’s youngest female pilots. Come back later this week to find out how they’re shaking up the aviation industry and paving a path for the future!

Many thanks to Jessica Hayler of Women in Aviation Australia Chapter, and Happy International Women’s Day everyone, wherever you may be today!

Alitalia: The Latest On The Soon-To-Be Italian Flag Carrier