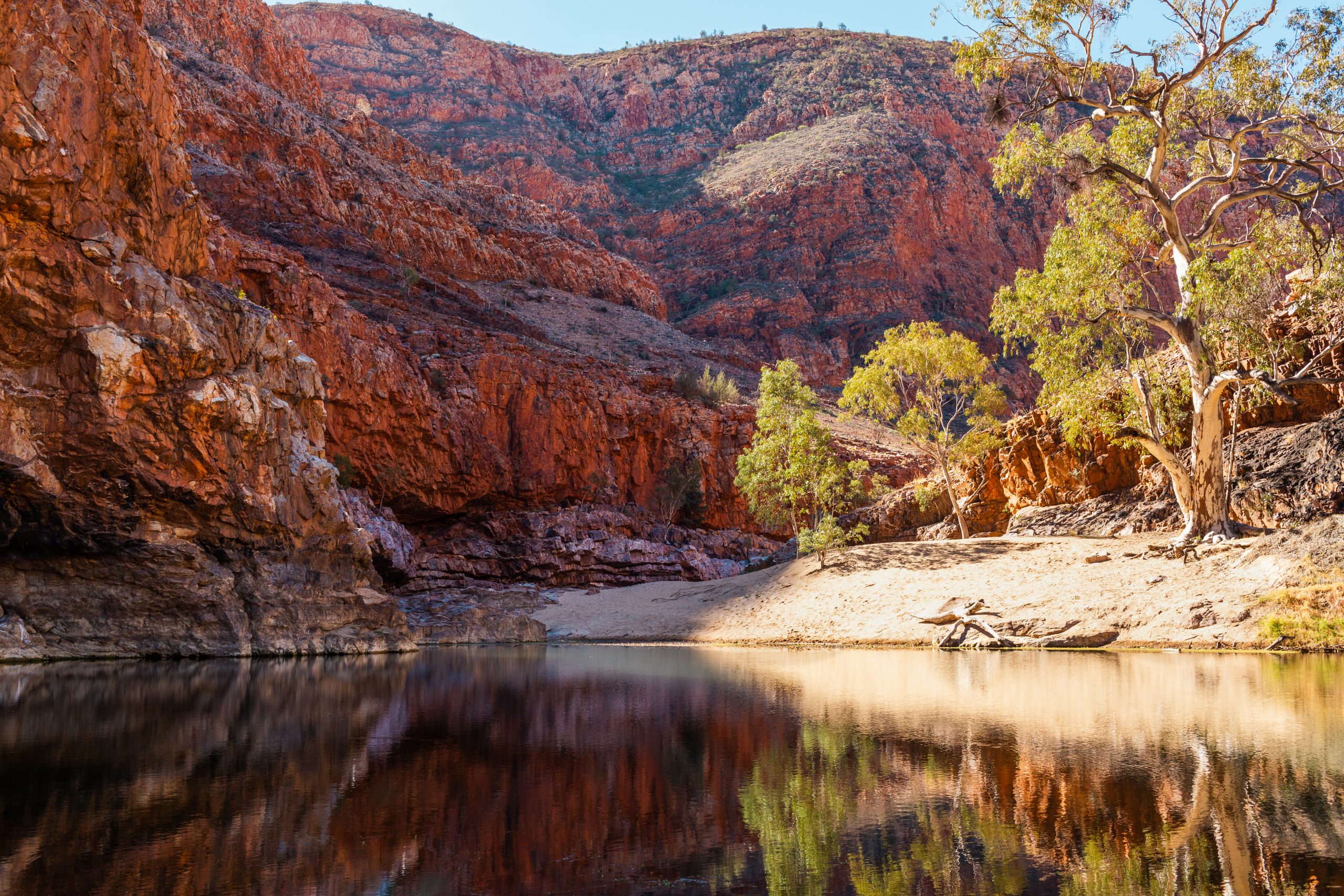 In a strange year where hands have consumed more alcohol than we have, it’s understandable Aussies are desperate for budget flights to whisk them away from family confinement. I never thought “I wouldn’t touch them with a six-foot pole” would become a national policy, but here we are, thankful for the free seat next to us. Not only has social distancing brought about some deeply satisfying public transport policies, but it’s forced us to turn to our backyard for our next holiday getaway. The prospect of being unable to travel abroad still sucks, but with the Tasman travel bubble coming to fruition and government-subsidised flights available, now is the best time to travel!

If you are still hung up over the dream of a Bali sunset or eating a pizza in Pisa, this article is not for you. However, if you’re tired of the weather channel predicting room temperature and you’re open to exploring why 9.3 million tourists visited Australia in 2019, read on.

Australia is massive. It’s the sixth-largest country in the world by landmass. At nearly 7.7 million square kilometres, you can fit England into Australia approximately 59 times. Australia is home to some of the world’s best beaches, the oldest rainforests and river beds, as well as breathtaking mountain ranges. The ancient geological makeup of Australia makes it a destination unlike any other, and for the 25 million people lucky to live here, it’s all at your disposal except for Melbourne. We’re thinking of you guys…

After trawling the vast, commercially intimidating world of budget holiday websites, I have compiled a list of budget flights that will make you feel like you’re abroad without needing to use New Zealand as a backdoor escape hatch!

Bordering the majestic Deua National Park, littered with waterfalls, limestone caves and eucalyptus scenery, Moruya is the gateway to another world. The town itself is relatively unknown to outsiders and tourists alike as it is usually overshadowed by the likes of Batemans Bay in the north and Narooma in the south. However, it’s a hidden aviation gem for more than one reason. Not only can you grab yourself a bargain return flight from Sydney, but the runway is directly parallel to a pristine beach.

If hiking through dense pockets of Pinkwood Rainforest sounds like the perfect getaway, Rex Airlines run a regular flight to Moruya via Merimbula from Sydney. You can fly directly from Sydney to Moruya but be prepared to pay double the fare! Flying via Merimbula entails a short 20-minute layover, and the flight will take just 2 hours in total. At just A$196 return, this incredible deal, which includes a direct return flight, is currently available through Mytrip.

No, you’re not dreaming, Kakadu National Park is a real place, and yes, it’s just around the corner from Darwin. From the place that used the C-word as the subject of a national advertising campaign, expect nothing less than a sensory overload. With the culturally rich Tiwi Islands placed off the north coast and several of Australia’s most beautiful national parks such as Kakadu, Litchfield and Nitmiluk placed south-east and southwest, you’ll be completely immersed in another world. A short trip to the geographically diverse Northern Territory town of Katherine also offers you a chance to see the jaw-dropping Katherine gorge.

June is a great time to visit Darwin thanks to its tropical climate resulting in bone dry, mid-thirty degree winters. No matter where you are placed in Australia, Darwin had become a cheap destination this year, with government incentives cutting flight prices almost in half. The cheapest route to Darwin is from Cairns in Queensland. The flight provided by Jetstar Airways will set you back just A$215 return via the budget flights website Agoda. You can also fly from Sydney or Melbourne for under A$300 return which is over half the price you would have paid at this time last year.

Set on the idyllic limestone coastline of South Australia, Mount Gambier is a hidden gem within a gem. The second largest town in South Australia is often overlooked when visiting South Australia, with Adelaide usually being the prime destination of choice. Thanks to the permeability of limestone, sinkholes are scattered across the Mount Gambier landscape. As a result, there’s several breathtaking lakes and sinkholes to discover, such as Blue Lake and Umpherston sinkhole.

If underground gardens of Eden sound like your thing, Rex Airlines have you covered. Departing from the currently locked-in Melbourne, a return flight will only set you back A$257 via the booking site Mytrip. Flights from Sydney are around a hundred bucks more. However, that is still a very reasonable price given Sydney’s proximity.

There aren’t many places in Australia that experience four genuine seasons. However, Launceston is one of the places that does. In the autumn months, the entire city turns bright orange and red, mimicking a scene from the northern hemisphere. Actually, there’s a good reason why Launceston has a European feel to it. As one of Australia’s oldest cities, it was originally settled by Europeans, and much of Launceston’s heritage infrastructure remains intact to this day. If a heritage city setting isn’t where you like to holiday, you’re in luck as Launceston is perfectly situated as a doorway to exploring the mountainous wilderness of Tasmania.

Flights to Launceston are currently offering up incredible value with return tickets as cheap as A$72 from Melbourne and A$114 from Sydney. Both Jetstar and Virgin Australia offer these competitive rates from both major cities, with the best deals to be found at BudgetAir for this route.

We couldn’t forget about our cousins across the water after several months of anxiously waiting for the Tasman bubble to open up. While Christchurch provides good budget flights, it’s by no means the cheapest option to visit New Zealand at the moment. However, with the entire South Island at your doorstep, this is a magical place you can’t miss. Much of the city has a European English heritage which could not feel further from the Sydney or Melbourne central business districts. Day and multi-day trips out of Christchurch allow you to visit New Zealand’s tallest mountain, Mount Cook.

Temperatures in June can get to well below freezing, so if you’re in the mood for a wintery holiday away from Thredbo, Christchurch may provide you with all the answers. With careful planning, it’s possible to book return flights to Christchurch, leaving Melbourne for under A$300. What a steal. Gold Coast and Sydney direct flights can also be purchased for A$315 and A$375, respectively. Jetstar is the way to go again, with these prices found at holiday booking site Opodo. Be aware that the price given to you at Opodo excludes luggage, but for just A$15 extra, you can book this route with the airline itself.

Maldives who? Australia has its own Indian ocean archipelago that will rival the world’s favourite crystal watered islands. The Cocos Keeling Islands are made up of two coral atolls that comprise 27 white-sand islands. Beyond crystal clear lagoons and palm tree-lined beaches, the archipelago has a rich history and played an important military communications role for Australia. It’s undeniably Australia’s most idyllic spot, and the best part thing about it is that Australians can travel freely to and from this paradisiacal location.

Thanks to the Indian Ocean climate, June is a fantastic time of year to visit. It goes without saying that Cocos Islands are among Australia’s most expensive destinations. However, if there was ever a good time to visit, now is the time. Flight subsidies and a lack of international tourists have driven prices down and kept the islands quiet. Virgin Australia flies directly from Perth with return flights starting around A$1,059. The four and a half hour flight will take you over some of Western Australia’s most stunning coastline before landing on a tiny airstrip surrounded by turquoise water.

Honourable mentions go to Sydney to Ballina for A$96 return, Sydney to the Sunshine Coast for A$107 return and Brisbane to Prosperine for A$144 return. Even if you choose to stay put this year, Australia’s cities are abuzz with events and spectacles sure to entertain everyone. Check out Vivid Sydney in August for one of the world’s most impressive light shows in the world’s most beautiful harbour.

Found an incredible deal Australians need to know about? Let us know in the comments. Sharing is caring!

The Struggle Between Airlines' Uniforms and Gender Identity

Read More
Finnair‘s long-haul travel experience is about to get an upgrade, as the airline announced this week that it…
Read More
Holiday company TUI is expecting to have a successful summer of flights this year as 2.8 million customers…