An in-flight experience would not be complete without in-flight entertainment. A collection of movies, music, and more to make your TV subscription seem insufficient. But which is the best one?

Back in the day, IFE used to consist of two things: big drop-down screens (overhead televisions) which played a channel at a time. Often this came with a remote device complete with headphones for you to listen in to radio stations which played classics like ABBA.

But now all has changed for we now have Seatback Entertainment (SBE).

Which is the Best IFE?

Of course, not all seatback screens provide high-quality entertainment. For instance, some screens may be low in resolution, unresponsive upon immediate touch and may offer too little choice when it comes to IFE. But there are certain IFEs which stand out from the crowd. 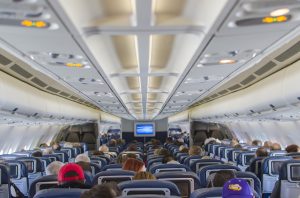 In 2019, Skytrax named Emirates as the world’s best airline for in-flight entertainment for 15 years running, swiftly followed by Qatar Airways and Singapore Airlines. Each offering us similar yet different forms of entertainment. Let’s take a look.

There’s something refreshing about Emirates’ ICE. A quick play of its ‘Welcome Onboard’ clip and we enter a different world, one where we are immersed in virtual reality, and one where we are in control of what to watch and when. ICE stands for Information, Communications, and Entertainment. Information and Communications includes travel itinerary, weather, routes, WiFi (although there is a charge). Whilst Entertainment includes an incredible 4,500 channels of entertainment, with films spanning from Asia, America, Europe and beyond, including Live TV coverage of e.g., Wimbledon and the UEFA, and games handy for adults and kids if they’ve had enough of TV.

Or there is Qatar’s OryxOne that provides you with over 4,000 entertainment options, such as movies, TV series, music and audiobooks etc. Recently Qatar updated their seatback screen for to a ‘‘13-inch Panasonic IFE touchscreen” on their Boeing 787-9 Dreamliner for Economy class.

So what can Singapore Airlines offer that is any different from the above two airlines? Well they offer similar features in terms of media content, web-based gaming, connectivity (with one hour’s free complimentary Wi-Fi before charges apply).

But what makes them stand out is that they offer direct online shopping through SA’s partnership with KrisShop which started late June. There, passengers can shop from 4,000 products, which is certainly a popular number for all three airlines.

Which is the best IFE you have experienced on a plane? Let us know below. Do check out our piece on inflight food as well that also accompanies the flight very well!

Malaysia Airlines Puts Airbus A380 Superjumbos up for Sale