Virgin Atlantic of the United Kingdom commenced its flights to Islamabad, Pakistan.

With this flight, Virgin Atlantic makes its entry into Pakistan.  The scheduled flight arrived in the morning on Friday at Islamabad’s (ISB) Jinnah International airport. 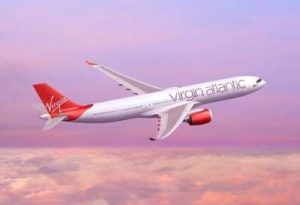 The flights connect London Heathrow (LHR) from Islamabad in the return direction.

Virgin Atlantic will be using the Boeing 787 Dreamliner for this sector.

The first flight arrived in Islamabad on Friday.  In addition, maiden flights always receive the water cannon salute.  As a result, this flight received honours.

For the Pakistani side, the flight was on the tarmac by Prime Minister’s Special Assistant for Overseas Pakistanis Zulfikar Bukhari and British High Commissioner Christian Turner, The Express Tribune reported.

Moreover, speaking on the occasion, Bukhari said, “The arrival of international carriers to Islamabad will boost trade and tourism and will also help in enhancing trade ties between Pakistan and the UK,”

Bilateral relationship and trade ties will improve with this flight.  Your comments, please.