The US Air Force has confirmed that an F-15C Eagle crashed into the North Sea around 9.40 am this morning.  It came down near Flamborough Head in East Yorkshire, south of the town of Scarborough.

A major operation has been launched to search for the single pilot on board who had not been found at the time of writing. 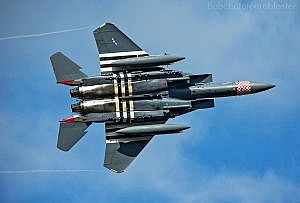 The aircraft was from the 48th Fighter Wing at RAF Lakenheath in Suffolk. In a statement the US Air Force said that when the accident happened the aircraft was on a routine training mission with one pilot on board.

A search is underway for the missing pilot.  Three US Boeing KC-135 Stratotankers have been circling above the site of the crash. The HM Coastguard helicopter from Humberside and the Bridlington and Scarborough RNLI lifeboats are also at the scene

The pilot was confirmed dead when his body was found on Monday evening.  The cause of the crash is not known.