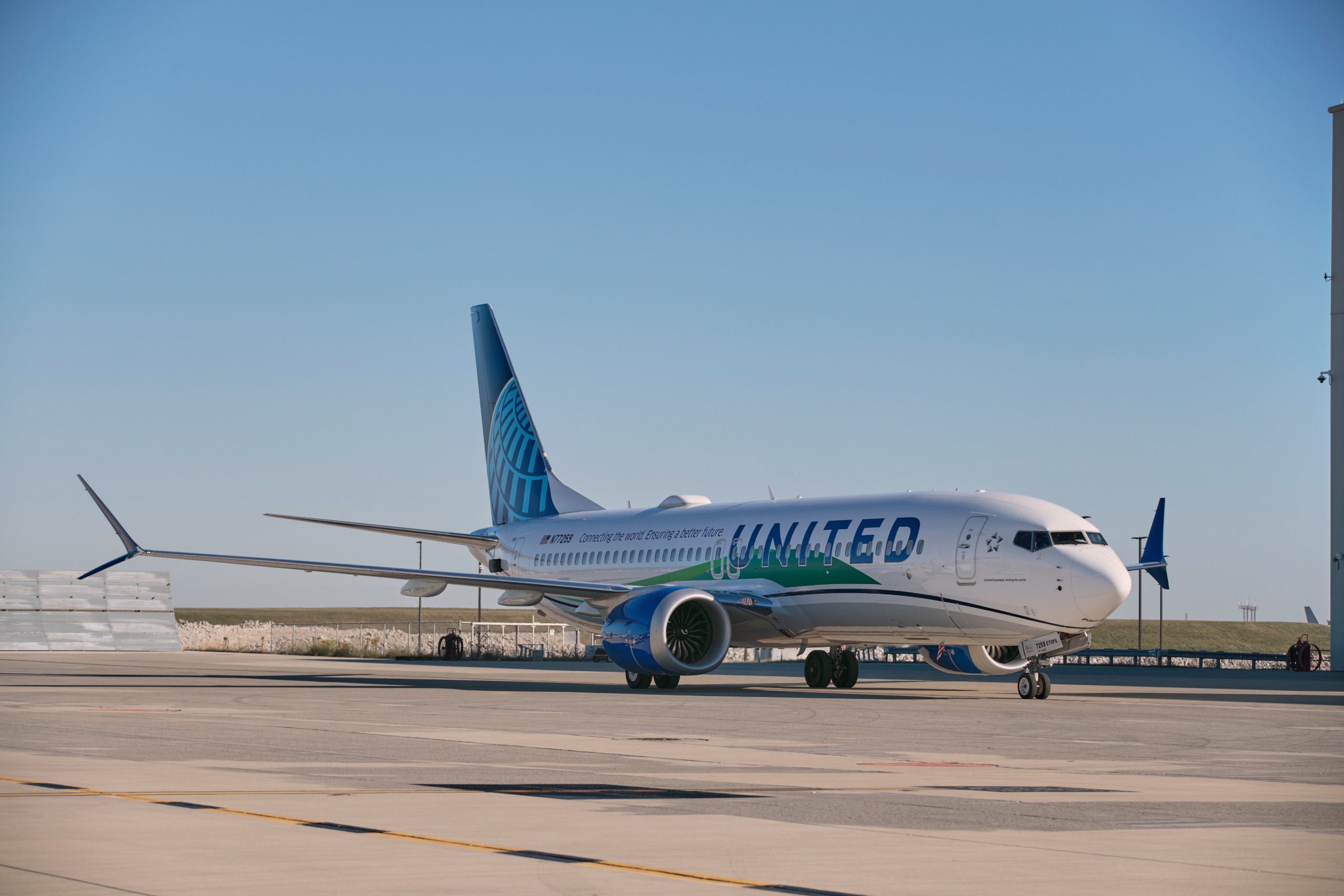 On December 1, United Airlines became the first commercial airline to fly an aircraft, filled with passengers, using 100% sustainable aviation fuel (SAF) in one engine. The flight is the first of its kind in the commercial aviation industry and is one of many future sustainable flights for United, according to the US airline.

The history-making demonstration flight, operated by a brand new 737 MAX 8, flew from Chicago O’Hare International Airport to Reagan National Airport in Washington DC using alternative fuel made with non-petroleum feedstocks. To prove the effectiveness of sustainable aviation fuel, United, in partnership with Boeing, CFM International, Virent, and World Energy, used 500 gallons of SAF in the right engine and 500 gallons of conventional jet fuel in the other engine. Presently, airlines are not permitted to use more than 50% SAF on flights, and United is the first to use SAF entirely unmixed in one engine on a passenger flight.

“Today’s SAF flight is not only a significant milestone for efforts to decarbonize our industry, but when combined with the surge in commitments to produce and purchase alternative fuels, we’re demonstrating the scalable and impactful way companies can join together and play a role in addressing the biggest challenge of our lifetimes.” – Scott Kirby, CEO, United Airlines

The unprecedented flight, which emitted an estimated 75% less CO2 than conventional fuel, cements United’s position as a world leader in the sustainable fuel industry. The airline has also pledged support for the development of SAF. With agreements to purchase almost twice as much SAF as all publicly announced agreements of other global airlines combined, United’s Eco-Skies Alliance program is the biggest of its kind. The program, introduced in April 2021, has collectively worked toward the purchase of over 7 million gallons of SAF (the equivalent of flying passengers more than 460 million miles) so far and includes nearly 30 participants such as Visa, Microsoft, Nike, DHL Global Forwarding, Salesforce, and more.

“As an industry, we are committed to addressing climate change, and sustainable aviation fuels are the most measurable solution to reduce aviation carbon emissions in the coming decades. No one entity can decarbonize aviation alone and it will require partnerships like this to ensure aviation is safe and sustainable for future generations.” – Ihssane Mounir, Senior Vice President of Sales and Marketing, Boeing

This flight has proved that SAF can be just as effective as conventional jet fuel – at a fraction of the carbon footprint. Additionally, there are enough American feedstock resources to fully meet the expected demand of the US aviation industry, according to the US Department of Energy.

United has purchased 1.5 billion gallons of SAF – enough to fly 57 million passengers – from Alder Fuels, with an additional option to purchase up to 900 million gallons from Fulcrum BioEnergy.

What is sustainable aviation fuel (SAF)?

Sustainable aviation fuel (SAF) is a term that generally refers to any aviation fuel that is not conventional jet fuel and is derived from renewable sources as opposed to fossil-derived sources. United defines the SAF used on the flight as “an alternative fuel made with non-petroleum feedstocks”. The airline has agreements to purchase almost twice as much SAF as all publicly announced agreements of other airlines, globally, combined. Major airlines such as Lufthansa and Cathay Pacific have also been developing SAF.

United’s partnerships with Virent (a subsidiary of Marathon) and World Energy allowed for the development of a 100% drop-in SAF, allowing it to be used by aircraft without any alteration of the engines. It can also be mixed with conventional fuel and is compatible with other aircraft.

Are you excited about the future of sustainable aviation fuel? Let us know in the comments below!

Assistant Editor | Sarah is a digital marketer and writer based in Canada with a passion for aviation and travel. In addition to her background in broadcasting and content creation, she also has experience in the aviation industry and an interest in aviation photography.

Read More
The successful introduction of universal COVID-19 testing for air passengers requires trust between countries.   It also depends…
Read More
Italy has extended its quarantine period for British travellers until 30th August in what comes as the latest…
Read More
This Saturday, on October 16, eligible New Zealanders, in what is being called “Super Saturday” will have the…