On Monday 15th earlier this week, a Boeing 777, operated by United Airlines, departed Hong Kong International Airport with an unapproved early turn towards the mountainous terrain of Lan Tau Island.

The flight, which was operated by United Airlines, was a Boeing 777-322ER with a cargo configuration with the callsign UA2864. Cleared for an OCEAN 2A Standard Instrument Departure(SID)[1], the flight took off from Runway 07R at 4:05 pm local time as instructed initially, until it made an unapproved right turn towards the mountains of Lan Tau Island promptly after liftoff. The aircraft flew overhead the locally famous country trail Lo Fu Tau at 3764ft, where the highest point of Lan Tau Island stands at 3068ft. It was reported by local media that Hong Kong tower immediately issued a warning and assigned a corrective heading for the 777 to follow. The flight departed Hong Kong to Tokyo without further reported incidents. 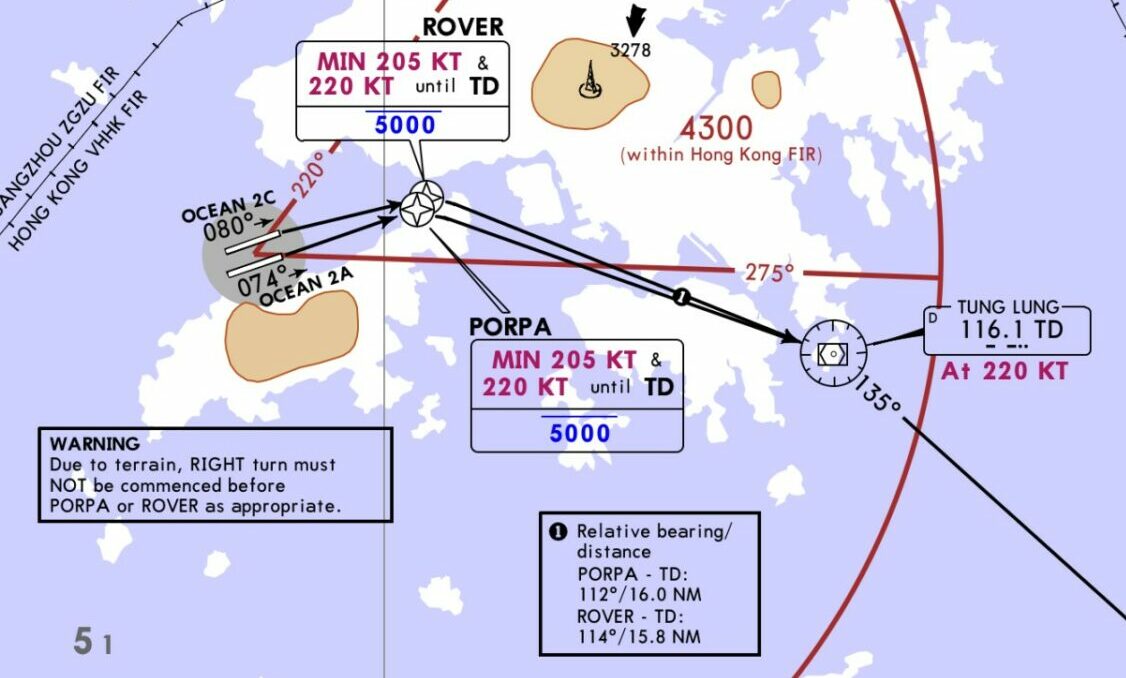 Back in 2017, a similar incident occurred and an investigation was launched and eventually reported as a serious incident by the Air Accident Investigation Authority of Hong Kong (AAIA). The flight involved a 747-800F flying from Hong Kong to Anchorage and was operated by Atlas Air Inc. Numerous similarities can be seen between the two incidents. Find out more on the incident in 2017 here.

Both flights took off from Runway 07R, which is the southern runway closer to the terrain of Lan Tau Island. The former flight was cleared for a RASSE 1E and the latter was cleared for OCEAN 2A and both of these departures required the aircraft to maintain runway heading until their respective waypoints before they can make a right-hand turn toward an easterly direction to avoid the mountains of Lan Tau Island. According to aviation weather achieves, the indicated weather conditions for the United Airlines flight was well above operating minima:

Similar to the Atlas Air flight, the United 777 flight UA2864 was operated in very high visibility and this should have given the flight crew some situational awareness on their proximity to terrains.

Both flights operated by US cargo carriers using Boeing aircraft

Flight UA2864 was operated by United Airlines as a cargo flight from Hong Kong to Tokyo and then from Tokyo to Chicago. CX86 wet-leased by Cathay Pacific was operated by Atlas Air flying from Hong Kong to Anchorage with Boeing 747-800F in cargo configuration. Both companies have long histories in connecting Hong Kong with the US and still operating scheduled flights after their incidents.

It is too early to say what contributed to the incident of UA2846 as it will take a lot of coordination between airlines, aviation authorities, and aviation experts to define the factors. In both incidents, air traffic controllers and the pilots acted promptly as the last barrier to avoid catastrophic disasters.

What do you think maybe the causes of the incident. Would the flight management system of Boeing aircraft be responsible? Or do the designs of the SIDs of Hong Kong contain latent errors? Let us know below.

[1]Standard Instrument Departure(SID)- Prescribed routes procedures designed to guide aircraft from take-off to a point where it connects with airways for cruising.

[2]CAVOK-Acronym for Ceiling And Visibility Okay on a weather report to show that visibility is more than 10km and no significant weather such as precipitation is within the vicinity of the aerodrome.

[3]Crew Resource Management(CRM)- refers to the effective use of all available resources to enhance the safety of operations by reducing errors and knowing limitations.