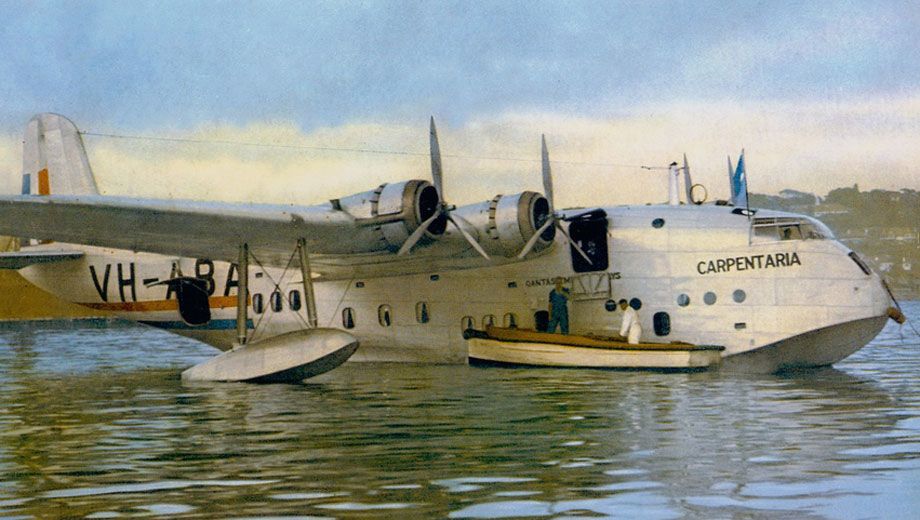 Today, the Rose Bay foreshore is a calm, inner harbour oasis in Sydney. Except for the occasional recreational seaplane coming and going, you would never have guessed this paradisiacal bay played host to Australia’s first international sea airport. It was home to Qantas Empire Airways, and it was the site of the first flying boat trip along the Kangaroo route, the nickname given to the journey between Australia and England.

The atmosphere around Rose Bay feels somewhat melancholic in the present day as a large slice of Australian aviation history has simply vanished. Australia may not be synonymous with an illustrious history, but this tiny airport played an important role in Australian aviation.

The Catalina restaurant next to Rose Bay’s ferry terminal is perhaps the only local business to carry forward the legacy of Rose Bay’s aviation chapter. The Catalina was not only used as a commercial seaplane during the airport’s reign, but it was a world war II hero. The sea airport officially opened on the 4th of August 1938, and its service was short-lived. In 1942, the war had reached Australia, and flights were suspended. Flying boats were called upon by the RAAF to support Australia’s war efforts, transporting supplies and carrying out reconnaissance operations. The Catalina’s would be used on top-secret “double sunrise” projects between Perth and Sri-Lanka, then known as British Ceylon. Qantas pilots would continue to fly to England to keep the trade route open, famously breaking the Japanese blockade over the Indian ocean when Singapore fell.

Two weeks after world war II ended, nine Catalina flying boats landed at Rose Bay. Onboard were the repatriated Australian prisoners of war who had survived the Japanese camps. Some 50’000 people lined the shores in Sydney on September 16th, 1945, to welcome home the Australian captives. It didn’t take long for the kangaroo route to spring back into action when the first post-war flight left Sydney on May 18th, 1946. The post-war era became the golden age of luxury travel, and a two way trip between England and the land down-under would set you back approximately 100 times the average annual wage. Using current UK salary data, it would have been like spending roughly £3.1 million on a plane ticket.

Soon after air travel resumed and boomed, a shift towards jet-airliners rendered the crowd-pleasing flying boat obsolete. Technological advancements meant jet-airliners were cheaper to run and fly, time effective and afforded greater accessibility to landlocked locations. In 1955, Ansett Airways brought all of the remaining Qantas flying boat fleets, just as Qantas flew its last service out of the bay. Ansett flying boat services continued the Lord-Howe Island service long into 1974 due to its remote pacific location and lack of a better option. However, by 1974, the island gained a small tarmac runway which marked the death of Australia’s seaplane legacy. The last commercial flight to depart Rose Bay occurred on September the 10th, 1974, an Ansett Airways flight to Lord-Howe. All that commemorates Rose Bays’ impactful aviation legacy is a small plaque in Lyne Park, opposite the new Rose Bay ferry terminal.

While the Kangaroo route no longer operates out of the bay, Sydney seaplanes run a popular joyride experience that allows seaplane and sightseeing enthusiasts alike to enjoy a unique corner of Sydney. Not only does Sydney Seaplanes offer tourists and locals a birds-eye view of the world’s most celebrated natural harbour, but it also captures the history of a forgotten aviation legend.

Packages vary with a range of occasions and tours available. The scenic tours offer the best opportunity to see all that Sydney has to offer. While there is very little left to remind people of the bays aviation history, if you dig deep enough and just pay close attention, Rose Bay remains its own living museum.

Do you or a relative have any memories or experiences of flying on a seaplane from Rose Bay? We’d love to hear about them!