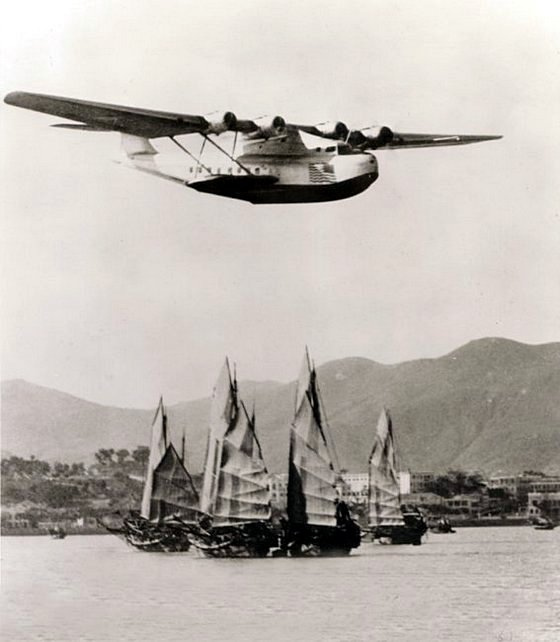 Home Crossing the Harbour in Flying Boats, a Look Back in History

With the coverage of the reactivation of seaplane services –NEW WAY TO TRAVEL OUT OF HONG KONG: HONG KONG’S NEW SEAPLANE OPERATOR – we would like to take this opportunity to take you back to the early days when the seaplanes were soaring in Hong Kong, and more widely across the world.

It started with Pan Am

Pan American Airways was the first operator of flying boats as a part of the company transpacific routes. The seaplane then picked up passengers in Macau who travelled on another Pan Am seaplane, passengers who intended to travel to mainland China took other flights in Hong Kong after arriving in the city. This includes several pieces of luggage carried by the well-heeled travellers, who paid the equivalent of USD 32500 in today’s money for a return journey. A twenty minutes ride between Hong Kong and Macau were served weekly and also served as gold bars shuttle between the two European colonies until the Japanese Occupation in 1941.

After the war, the flying boat services resumed and expanded to the neighbour cities, Catalina flying boat were brought into the Cathay Pacific after its establishment in 1946, primarily to shuttle gold and cargo by the demand from the Chinese civil war. At this time, passage for most to visit Macau was by wartime steam ferries from the China coast by the veterans and required around four hours for connecting Hong Kong and Canton.

In July 16, 1948, a Cathay’s Catalina flying boat chartered to Macao Air Transport Company (MATCO), Miss Macao, which was, considerably world’s first air hijacking case. The hijackers had decided to hold up the aircraft after tempting reports of cargo of gold bars, however the plan failed when one of the hijackers shot the pilot, and causing the aircraft to dive into the sea. Twenty-six people died. The only survivor was the leader of the hijackers.

However, in October 1961, MATCO’s managing director suspended from December 1st due to unstable conditions at Macau’s harbour. The company offered 4 flights to Macau in the Piaggio were being advertised in the newspapers by Lotus Tours Ltd, the sales agents for MATCO. The Macau ferry terminal were used the ramp and facilities originally constructed for the services.

What are your thoughts about flying boats? Would you try the new service offered in Hong Kong? Let us know in the comments below!

Read More
Breaking News came in from Hong-Kong this afternoon, that BNO passports will no longer be allowed at the…
Read More
We are all captivated with the scene of people working around and getting our aircraft ready for the…