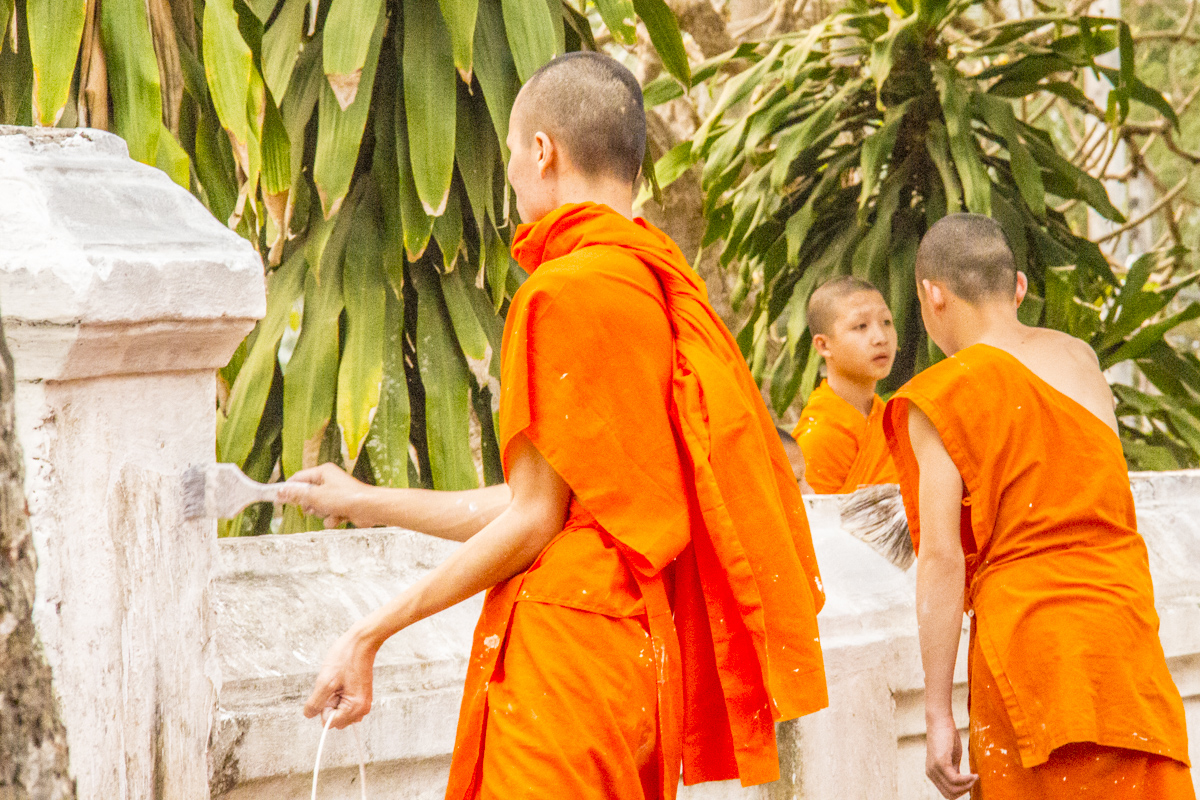 In the pretty city of Luang Prabang, there is an air of peacefulness I have not experienced anywhere else in the world.  Due, no doubt to the temples and Buddhist monks that are part of daily life here.  With a total of more than thirty temples, it is the main centre of Buddhism in Laos.  Each temple has its own story to tell and these are some of my favourites.

Wat Visounarth is the oldest temple in Luang Prabang and it was the ideal place to learn about the architectural features of a Buddhist temple. ‘Temple’ in Laotian translates as Wat and the main building is the sim.  This is sometimes a complex of several buildings and houses statues of the Buddha.  Accommodation for monks is a common feature of these temples.   The traditional dome-shaped stupa is the place where the sacred relics are kept and they generally relate to the Buddha.

The stupa at Wat Visounarth has a very unusual shape.  When King Wisunarat built the first temple on this site at the beginning of the sixteenth century his wife designed the stupa.  In theory, it represents a lotus flower but in reality, it looks more like a watermelon.  For this reason, the locals refer to it as the watermelon stupa and you can see why!

Wat Sene Souk Haram is also known as the temple of one hundred thousand treasures.  It is one of the most beautiful temples in Luang Prabang.  Its treasures are the stones from the Mekong River that they used in its construction.  I enjoyed wandering around this massive complex that features a drum hall, a racing boat and the main building covered in yellow and red tiles in the style of  Thai temple architecture.

Two large banyan trees guard the entrance to Wat Aham Qutama Thang.  Today they house the two guardian spirits of Luang Prabang; Pu No and Na No.  Long ago these two spirits lived in shrines on the site of this temple.  King Phothisarath destroyed them in an effort to end the worship of spirits.  After that, the town suffered a series of disasters and the people blamed this on the destruction of the shrines.  Although two new shrines were built. they were later destroyed.  By then the spirits had taken up residence in the trees.

One of the most important symbols of Buddhism in Laos is Wat Xieng Thong in a beautiful location above the Mekong River.  It is also called the monastery of the golden city.  Inside it features an ornate representation of the Tree of Life.  I was curious about this exquisite piece of work and discovered that it symbolises the development of man and can take many different forms.

My exploration of the artefacts and architecture of the temples in Luang Prabang proved to be a fascinating journey through the chaotic and colourful history of Laos, a country that finally found peace through religion.

This article is by Valery Collins, the Experienced Traveller

British Airways A350 Collides with Emirates 777 at Dubai International

Read Article
Going through airport security is an important step in travelling internationally, and one that can be long and…
Read Article
Yesterday, a new COVID-19 variant was discovered in South Africa, known as the Omicron or the B.1.1.529 variant.…