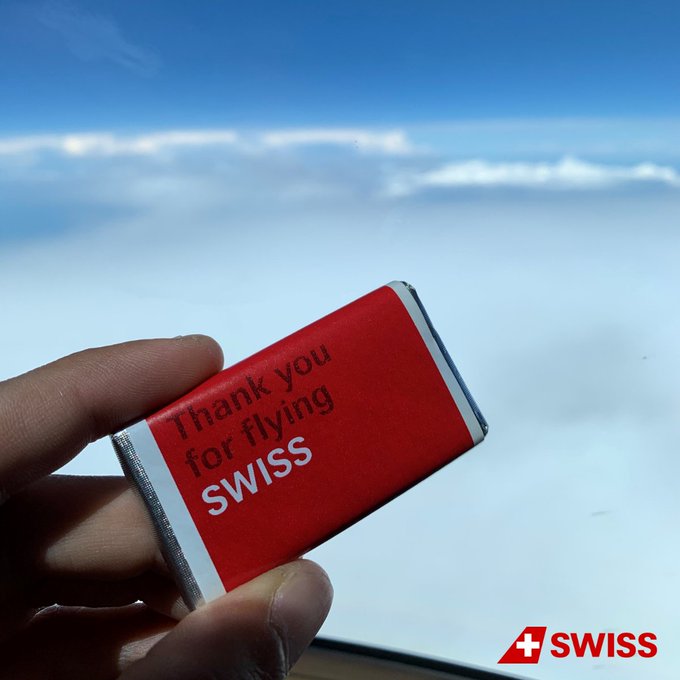 Swiss Airlines’ chocolate of course derives from the same fruit, the cocoa bean, like every other bar of chocolate. As SWISS poetically explains:

‘‘The sun’s rays warm the pulp and the beans, which leads to a natural fermentation process during which precious flavours develop.’’ Before remnants are compressed into a smooth chocolate mass through the process called Viscosity, roasted, ground and separated into cocoa butter and cocoa powder. And then ‘‘enriched with ingredients such as sugar and milk powder, rolled, and then stirred in heat to remove any unwanted tannins, […before] it is refined with cocoa butter’’.

But what makes Swiss Airlines’ chocolate stand out is that it’s a 16.2cm size tablet which has been created by a lead Swiss chocolatier, Migros Chocolat Frey.

By flying with SWISS, passengers will come to associate that tempting bit of Frey’s chocolate to Swiss Airlines, making the journey that little bit more special; a token for token’s sake.

The Effect of Chocolate on Aviation

Chocolate is a lucrative business. Globally, the chocolate industry is worth $135.8 billion and it’s expected to reach a total of $200.4 billion by 2028, as reported by Fior Markets. The aviation sector has certainly clocked on to this prospect. From sightings of Toblerones in duty-free shops to melt in the middle fondants on an Emirates flight, chocolate is the go-to gift for airports and airlines to passengers on site.

If we look at the U.S. brand Tony’s Chocolonely, we see that they, like SWISS, have taken advantage of the concept that chocolate and travel marry together. According to Forbes, Tony’s Chocolonely is distributed around 50 airports in the U.S and another 20 or so in airports across Europe with company sales totalling €88.4 million. We see this with Hershey’s Kisses and Reeses as well which are sold in duty-free shops worldwide – although not as much as they used to given the endemic.

Having said this, Chocolat Frey exited the duty-free market back in 2015 because of cost discrepancies yet they continue to generate revenue through their contract with SWISS (one which has since been extended from 2015-2018 to beyond 2021 given the uncertainty caused by the endemic), and of course through ecommerce and trade fairs etc.

The endemic has caused a significant drop in sales of chocolates and other confectionaries, that we cannot deny, but with travel restrictions easing and more footfall increasing, chocolate can once again make its way into our journey and on to our flights. Like SWISS, that little bit of chocolate could go a long way…

What is your favourite type of chocolate to eat/buy when you’re travelling? Let us know below! Also do check out our post on language and travel that’s also connected to SWISS.

Read Article
Ryanair has been forced to cancel thousands of flights from its summer schedule. The low-cost carrier axed the…
Read Article
Silk Avia, Uzbekistan’s new regional airline, and aircraft manufacturer ATR have signed a Heads of Agreement (HOA) to…