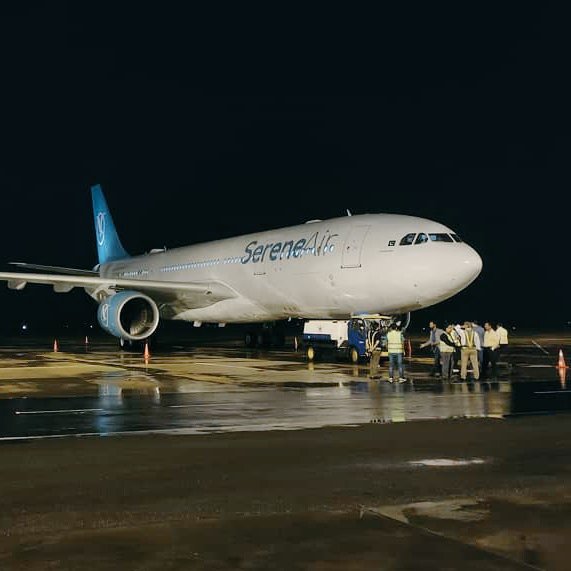 A Serene Airlines Airbus A330-200 made an emergency landing at Jinnah International Airport in Karachi after suffering in-flight engine shut down.

According to Avherald, the aircraft was en route at FL330 about 180nm north northeast of Karachi having departed Karachi’s runway 25L when the crew needed to shut the engine number 1.

The crew then decided to return back to Karachi and then drifted the aircraft down to FL160 and landed safely on the same runway some 65 minutes after departure.

Pakistan’s Civil Aviation Authority reported the crew needed to shut the left-hand engine down to a technical malfunction and returned back to Karachi.

According to CAA, sources said that the Serena Air Airbus A330-200 with registration AP-BNE had a technical malfunction 20 minutes after the take-off.

There were more than 200 passengers on board the aircraft. All passengers were disembarked from the aircraft and escorted to the lounge. The aircraft has been grounded for an indefinite period.

The airline officials said that the passengers on the affected flight who do not wish to continue their journey can get their tickets refunded.

A replacement Boeing 737-800 reached Islamabad with remaining passengers who wished to continue their journey to Islamabad.

The Serena Airlines Airbus A330-200, with registration AP-BNE, recently joined the airline recently in August earlier this year. The aircraft was in service with Air Europa until April this year.

The A332 was initially delivered to Air Europa back in March 2006 on lease and is currently 14.6 years old. We shall update as soon as we have any more updates regarding this incident. Stay tuned!

Canadian Transportation Agency in Lawsuit Over Refunds for Cancelled Flights

Read Article
Two aeroplanes collided at Heathrow Airport in London on Wednesday evening. The collision was minor, with a Korean…
Read Article
A scheduled routine regional flight from Sydney back to the northeast New South Wales city of Tamworth turned…