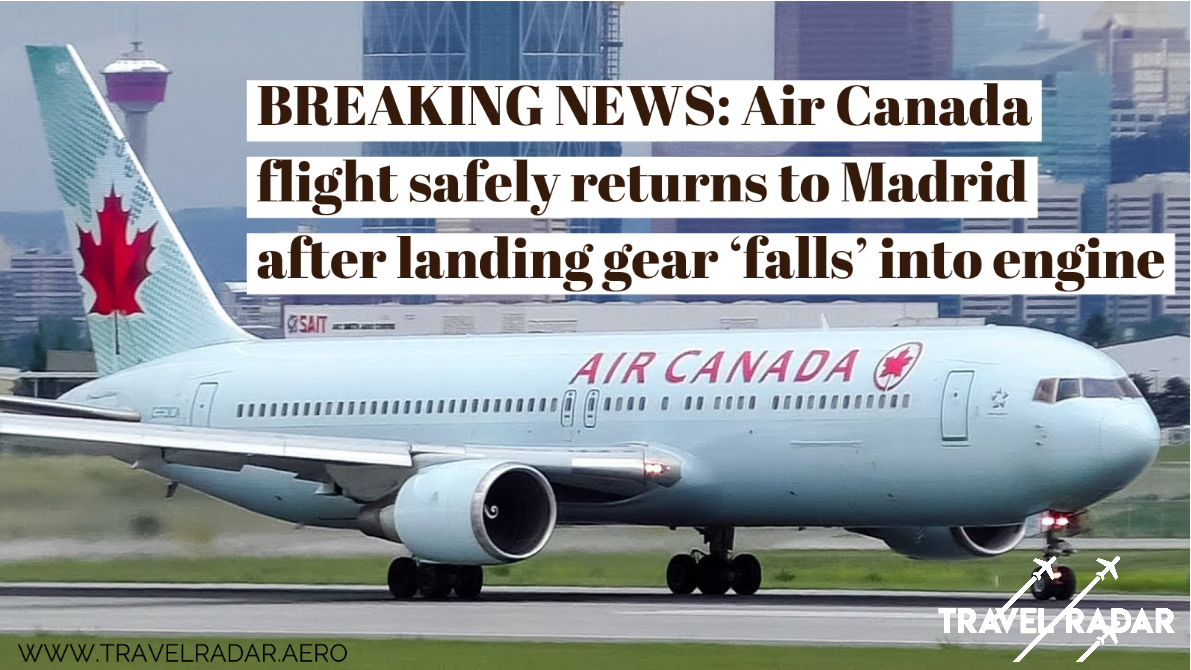 Ongoing reports at the time described it as a component of the landing gear having “fell off” and become ingested by the engine.

The Air Canada flight, number AC837, operated by a Boeing 767 aircraft, spent three hours circling above the south-easternly region of Spain, in an effort to burn fuel prior to landing. Air Traffic Controllers confirmed the pilots had requested an emergency landing to seek priority return to the airport and airport authorities later released a statement saying:

30 minutes after takeoff, flight ac837 requested an emergency landing to obtain priority clearance to get passengers and crew back on the ground as soon as possible

The aircraft, registration C-GHOZ, joined the Air Canada fleet since 2005 after taking it’s first flight in 1989. Shortly after the incident hit social media, the airline released a statement saying: “the aircraft type, a Boeing 767, is designed to operate on one engine, and our pilots are fully trained for this eventuality”

Earlier in the day the airspace at Barajas (Madrid) airport was closed after drone activity was detected in the airport vicinity. It was reopened just half an hour before the Air Canada flight got into difficulties, delaying departure of the Toronto bound flight. Authorities have now confirmed no link between fhe two incidents.

In dramatic footage from onboard the aircraft, a fighter aircraft can be seen trailing on the starboard wing. The Spanish Air Force confirmed that F18 aircraft were scrambled to escort the aircraft and the military pilots undertook a visual inspection of the aircraft – For damaged landing gear could make it tricky for the aircraft to be landed safely. It is also during this time an engine fire was identified on the port engine, likely due to fragment of the damaged undercarriage having entered the engine.

Flight 837 touched down safely at 6:15pm GMT time, with no injuries to the 128 passengers onboard. Pictures taken from the ground depict significant damage to one of the aircraft’s ten tires.

A subsequent full investigation has been launched into the cause of the tire rupture. We’ll update you on this as we receive it.