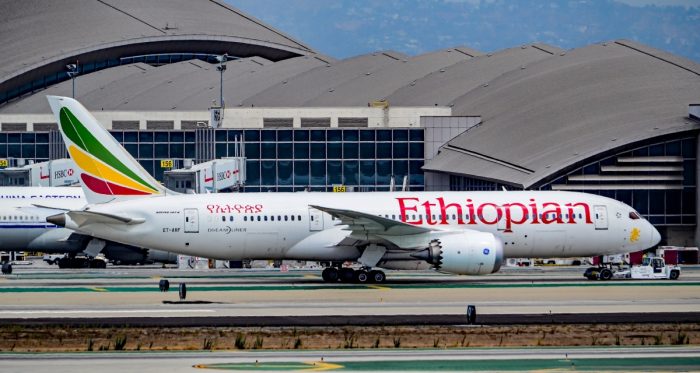 Ethiopian Airlines has announced plans for a brand new airport at the capital Addis Ababa.

Despite the recent construction of a new terminal at Bole airport, the airline’s CEO Tewolde Gebremariam has revealed an entirely new facility is due to be constructed at Bishoftu, 39 km south east of the capital, coincidently the site of the fatal crash of flight 302.

Ethiopian is the most profitable airline in Africa—a net profit of $260 million in 18/19 (up from $207 the previous year) and its biggest by fleet size; 116 aircraft.  Amongst many others it flies to five destinations in the USA, five in India and five in China as well as the more destinations in Africa than any other airline.

The new airport’s estimated costs are $5 billion, will have a land area of 35 km² and will be able to handle 100 million passengers per year. The new terminal at Bole tripled the capacity from 7 to 22 million passengers yearly but is now substantially below the anticipated demand. Construction is expected to start in the middle of this year.

Gebremariam said ‘Bole Airport is not going to accommodate us; we have a beautiful expansion project. The airport looks very beautiful and very large but with the way that we are growing, in about three or four years we are going to be full.’

The funds for the new airport are expected to be sourced from China; the Chinese Exim Bank funded the new terminal at Bole and the relationship is likely to continue. Numerous other capital projects in the East African state have been funded by Chinese lenders.

Ethiopian Airlines—one of the few profitable state-owned carriers-is positioning itself as a ‘mini-Emirates’ and has exceeded the number of long-haul transit passengers passing through Dubai to Africa. The limiting factor to expansion has been the capacity and facilities at its hub in Addis Ababa, and in principle this major issue seems to be solved.

Read More
Earlier this month an Ethiopian Airlines Airbus A350 – 900 suffered extensive wingtip damage from a runway excursion…
Read More
Yesterday, a new COVID-19 variant was discovered in South Africa, known as the Omicron or the B.1.1.529 variant.…
Read More
Yesterday (Tuesday, 20 September 2021) Travel Radar was in Helsinki (Finland), to attend a drone trial of the…