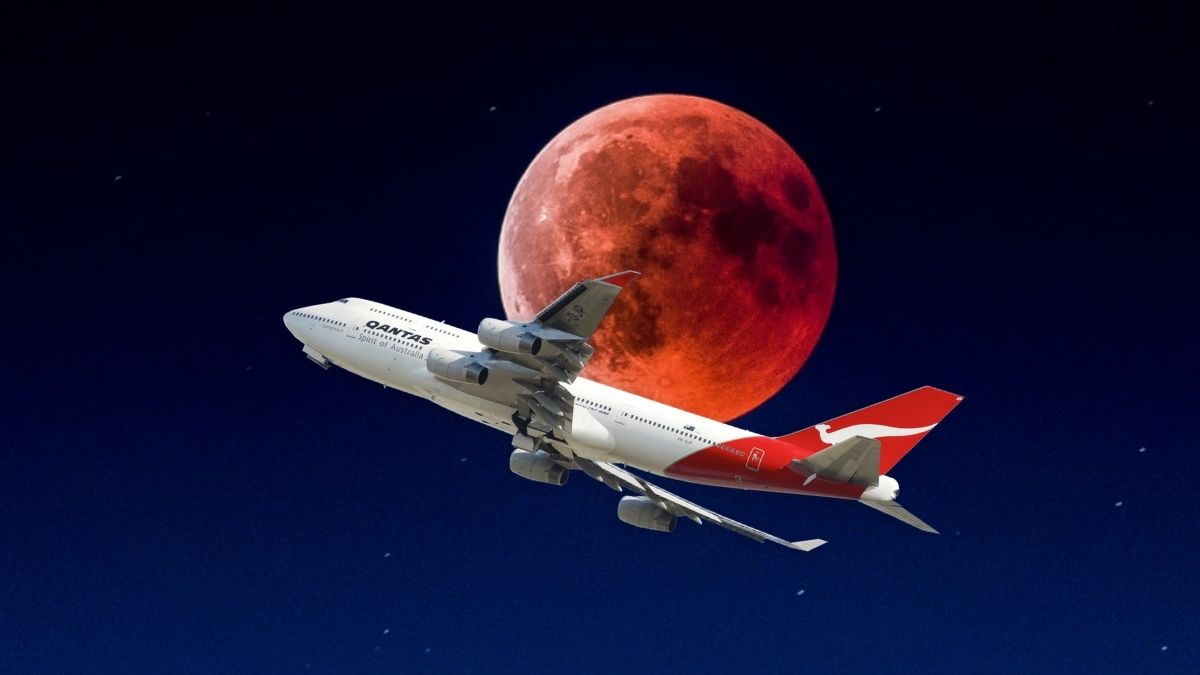 Missed Out On A SpaceX Seat? Qantas Has Your Back

Qantas has launched, literally and figuratively, a supermoon flight. In this next instalment of scenic flights, Qantas will fly you to the moon and back. It will provide Australians with an unparalleled view of the much anticipated May supermoon on Wednesday 26th. Expect to be served “cosmic cocktails” and “supermoon cakes” onboard a Boeing 787 Dreamliner, where you will also get a unique perspective of a total lunar eclipse. Qantas really did miss out on naming their sweet treats “space cakes”, as those on board will be among the highest people on earth viewing the phenomenon.

The super-sized blood moon will be gracing Australian skies on the evening of May 26th, 2021. The phenomenon headlines the astronomical calendar this year as it’s more than just a simple “full moon”. It’s a combination of May’s full flower moon (Supermoon) and a total lunar eclipse. In Sydney, the penumbral eclipse begins at 6:47 pm, climaxing with the total lunar eclipse at 9:11 pm. The moon will be in the earth’s shadow for around 14 minutes before the total eclipse ends at 9:25 pm. The show ends at 11:49 pm with the conclusion of the penumbral eclipse. It’ll be the last total lunar eclipse gracing Australian skies until November 8th, 2022.

Australia is set to be in the metaphorical front row for the “super flower blood moon eclipse”. Only the pacific rim will see a total eclipse; however, the supermoon can be seen from anywhere in the world, weather permitting.

So it’s a super flower moon and a total lunar eclipse. Where does the blood moon come into everything?

To unpack this question, we have to delve into solar-terrestrial physics! As the moon passes by earth, the only light reaching the lunar surface will have been filtered through earth’s atmosphere. It will only take the moon 14 minutes and 30 seconds to pass through the inside of the earth’s shadow. The earth’s atmosphere is made up of many molecules. Nitrogen (78.1%), Oxygen (20.9%) and Argon (0.9%) largely make up the bulk of it. The sun emits short-wavelength blue light, which hits the earth’s atmosphere and scatters. However, longer-wavelength red and orange light travels mostly duty-free through our atmosphere, meaning the light reaching the moon’s surface will predominantly be on the red end of the colour spectrum.

Enough solar-terrestrial physics. Tell us about the flight!

Just before you hit the Qantas website in the hopes you can bag a budget SpaceX experience; the flight has sold out. However, don’t beat yourself up as there were just 100 seats available. Taking place on a Boeing 787-9 Dreamliner, the flight technically could have a capacity of 236. However, due to Covid19 safety measures and window availability, the flight will provide a more intimate experience to the lucky hundred. B787-9’s feature the biggest windows on any passenger aircraft, which has made it a popular choice for scenic flights during the pandemic era of travel.

Departing Sydney’s Kingsford Smith Airport at 7:30 pm after pre-flight cocktails and surprise entertainment in the Qantas business lounge, the celestial flight will last around two and a half hours before returning to Sydney at 10:15 pm. The biggest pro to viewing an eclipse from a plane? You beat any possible cloud cover on the night! If you’re one of the lucky hundred, you may be among the only Aussies to see the super rare event.

Qantas Flight QF1250 will begin its ascent via a flyover of Sydney Harbour, showcasing the emerald city in all its illuminated beauty. The Boeing 787-9 will climb to around 43’000 feet, the Dreamliners maximum cruising altitude, well above any potentially adverse weather and atmospheric pollution. Qantas has also lined up a special guest to join passengers in-flight. Dr Vanessa Moss, an astronomer at CSIRO Astronomy and Space Science, will provide passengers with insights on supermoons and all things to do with space and astronomy.

Prices started at A$499 for an economy class seat, rising to A$899 for premium economy and A$1499 for business class. Tickets were released on Wednesday 12th, and sold out within minutes.

The recent mystery flights sold out within 15 minutes with hundreds of people on waiting lists and they keep telling us they want more. – Stephanie Tully, Qantas Chief Customer Officer.

On an environment footnote, Qantas said that the flight will operate with net-zero emissions, with 100% of emissions carbon offset. Operating these scenic flights at Net-zero emissions has been at the top of Qantas’ priority, ensuring unnecessary pollution is limited.

How and where will you be viewing this year’s last supermoon and only total lunar eclipse? Let us know in the comments.

150 Beds Lined Up At Bengaluru Airport To Battle Covid-19

Read Article
IATA (the International Air Transport Association) is proposing the universal introduction of COVID-19 testing at the point of…
Read Article
From Paris runways to an airport runway, Sydney Airport has unveiled a new luxury precinct that rivals iconic…