A Ukrainian military transport aircraft crashed and burst into flames near a highway about 400 kilometers east of Kyiv.

According to reports, at least 22 people have lost their lives in the crash. 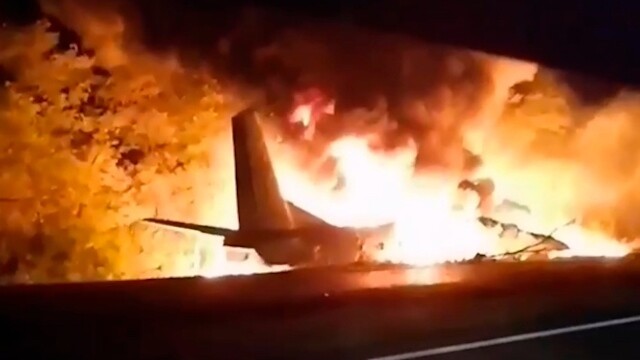 The military transport aircraft, reportedly an Antonov An-26 was carrying air force cadets from Kharkiv Air Force University. Ukraine emergency ministry officials say 27 people were on board the aircraft. The aircraft was performing a training flight.

The aircraft crashed while it was trying to land.

Oleksiy Kucher, the government of the region said that one pilot reported en-flight left engine failure before the crash.

An eyewitness who was driving along the road told Reuters that he saw a man in flames running from the aircraft after it crashed:

“Another car stopped behind us. We took a fire extinguisher and ran with another driver to help him. Another man came from the plane. He had a cut on his head. We pulled him to the opposite side (of the road). The one who was on fire, we put the fire out.”

It was also reported that some of the people on board managed to jump out of the transport aircraft when it was at low altitude.

“A state commission is being created to identify all the circumstances and causes of this disaster. Search and rescue work continues on the spot.”

President Zelenskiy will travel to the crash site on Saturday, according to his office.

As of now, the cause of the incident is unknown and the crash site is being investigated.

Travel Radar will continue to update on this serious incident as information becomes available.