Lufthansa Group has revealed the group’s revenue fell to 13.6 billion euros in 2020 despite extensive cost reductions, representing a huge drop from its 36.4 billion revenue in 2019.

The group’s net income amounted to minus 6.7 billion euros. The group has reduced personnel costs significantly through workforce reductions, crisis agreements with social partners and short-time working. At year end 2020, the total number of Lufthansa Group employees was around 20% lower than in 2019. The group’s capital expenditure reduced by around two thirds year on year to 1.3 billion euros from previous year’s 3.6 billion euros.

Carsten Spohr, CEO of Deutsche Lufthansa AG said the past year was the most challenging in the history of the company for its customers, employees and shareholders. “Travel restrictions and quarantine have led to a unique slump in demand for air travel. Now internationally recognised, digital vaccination and test certificates must replace travel bans and quarantine so people can once again visit family and friends, meet business partners or learn about other countries and cultures.” 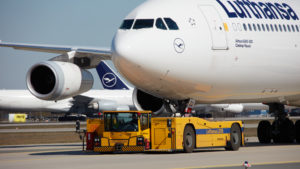 Lufthansa A340-300. Image Supplied by Lufthansa.

The group’s cargo division, however, has benefited from growing demand over the course of the year, achieving a record result with an adjusted EBIT of 772 million euros despite a 36% decline in freight capacity.

Its freight kilometres sold fell by 31% to 7,390 million metric tons but the load factor rose by 8.4 percentage points to 69.7 percent, with average yields rising by around 55% due to the shortage of supply.

By the end of 2020, Lufthansa Group had drawn government stabilisation funds of around 3.3 billion euros and has already repaid one billion euros. The group returned to the capital market in the second half of 2020 and raised 2.1 billion euros worth of funds via bonds and aircraft financing.

“The latest transactions have shown how much confidence the market has in our company. The Lufthansa Group is well financed beyond 2021. This is also helped by the previously unused elements of the stabilisation package, which we can draw on as needed to further strengthen our balance sheet.”

Lufthansa Group airlines, which include Lufthansa, Austrian Airlines, Swiss International Air Lines, Brussels Airlines and Eurowings, offered around one third of flights when compared to the previous year. Its passenger numbers totalled to 36.4 million,  25% of the previous year’s figure. According to the group, it has benefited from its hub system which enabled it to bundle its airlines’ low traffic volumes at their hubs to maintain important connections.

For the full year 2021, the Group expects its capacity to increase to 40-50% of 2019 levels and expects positive operating cash flows when capacity on offer is above 50 percent. The Group says that, in the short term, it is in a position to take advantage of market opportunities with the strategic expansion of its tourism business and a continued strong performance of Lufthansa Cargo.

“The unique crisis is accelerating the transformation process in our company. 2021 will be a year of redimensioning and modernization for us. The focus will remain on sustainability: We are examining whether all aircraft older than 25 years will remain on the ground permanently. From the summer onwards, we expect demand to pick up again as soon as restrictive travel limits are reduced by a further roll-out of tests and vaccines. We are prepared to offer up to 70 percent of our pre-crisis capacity again in the short term as demand increases. With a smaller, more agile and more sustainable Lufthansa Group, we want to maintain our leading position worldwide and secure the jobs of around 100,000 employees in the long term.”