Loganair CEO Jonathan Hinkles, today, has confirmed that the Scottish airline will be seeking financial aid from the UK government to help navigate the airline through this difficult time. The CEO commented:

The government has made it clear that it is open to requests for support from individual airlines and whilst Loganair has not yet taken up this invite, we fully expect to join other UK airlines in doing so in the coming days. 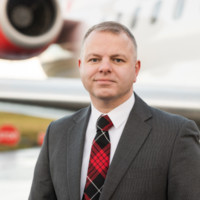 The Coronavirus (COVID-19), which has already disrupted the aviation industry worldwide, has forced many regional airlines –like Loganair- to seek bailout packages from governments.

As a provider of lifeline air services, Loganair is unlike other many airlines in that we are continuing to fly the routes on which our customers depend.

It’s critical that we do so, and we believe we are well placed to be able to maintain those services throughout the current crisis.

Loganair provides ‘near-essential’ services -pharmaceutical products, mail, and other important goods- to the Scottish islands such as those of the Hebrides, Shetland, and Orkney. This makes the airline a key-player in the region; for which it also receives subsidiaries from the UK government. It is unlikely that the Scottish airline won’t see the other side of the crisis, given that this won’t be a ‘blanket bailout’ package.  However, the question of whether Loganair will share the same fate as the British airline, Flybe -Loganair was operating some routes of the former airline- still remains unanswered.

Amidst the Cataclysm, Air Baltic Lends a Hand!