Women are playing a bigger part in the aviation industry than ever before. However, to ensure that more women are inspired to enter the sector and aim for senior management positions, proactive measures should be a priority. The FTE APEX Virtual Expo’s Women in Aviation Leadership Summit explored this important topic, with moderator Zeinab Badawi, BBC World News presenter, talking with a panel of female aviation industry leaders to ascertain their perspectives.

To start the session, Badawi quoted some staggering figures – just 7% of all pilots are women, with even a smaller number being captains. And in the boardroom, the figure gets even tinier – only 3% hold key management positions such as CEO and COO roles. When it comes to airports, 16% of airport managers are female.

ICAO Secretary General Dr. Fang Liu is one of the highly prominent female leaders in aviation. Image by ICAO.

Sophie Dekkers, Chief Commercial Officer of easyJet says one reason for this is the mindset that aviation is not the industry for women. “A survey conducted by EasyJet revealed that a majority of male pilots had decided they want to be pilots by the age of 10. However, a very small minority of women knew they wish to become pilots by the age of 16.”

“So, clearly there is a grassroots issue with stereotyping of roles and this limits the intake of women even in head office positions.”

EasyJet is working to tackle the issue, however. Just one example of easyJet’s measures to increase the number of women entering the sector is the carrier’s partnership with UK charity Girlguiding. The partnership, launched in 2018, aims to engage more girls to think about a career in aviation. As part of the programme, easyJet sponsors a new aviation badge for Brownies which challenges them to think of 40 things that fly and put their engineering skills to the test, creating their own aircraft experiments with different building materials, structures and launch techniques.

Promisingly, things are quite different in the Nordic countries. Ulla Lettijeff, SVP of Helsinki Airport and member of Finavia’s Executive Group, explained that at Finavia, the company which runs Finland’s airports, 30% of all personnel are female. “This is more normal in the Nordics but it is a result of a lot of hard work”, she noted, so the shift hasn’t happened overnight. Lettijeff explained that when it comes to combining working life with being a mother, she’d always been fortunate to have a supportive working environment. 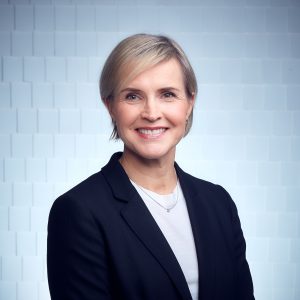 Making the most of opportunities

Amy Burr, Managing Director of Operations & Partnerships at JetBlue Technology Ventures, noted that confidence and believing that you can do the job is incredibly important to progress in the industry. The panel agreed that this can be hard especially for younger women but taking on different roles and making the most of offered opportunities will be very beneficial for career progression. “You may think you’re not qualified to do the job, but you totally can do it”, Burr explained.

Maternity and childcare issues are of course always something that every working mother needs to juggle and female aviation leaders are no different.  Aileen McCormack, Chief Commercial Officer of CarTrawler and former Ryanair Online Ancillary Manager, says the society isn’t supporting women enough from the childcare perspective to enable them to return to work. However, at her company, “we spend a lot of time coaching women who return to work, with leaders explaining how they get through their working week.” McCormack thinks a game changer for women in aviation is seeing more female role models in senior aviation positions.

Shawn Duffy, Senior Vice President and Chief Financial Officer of ViaSat, explained that to help girls visualise themselves in key aviation roles, we need to reach them at a very early age. And when it comes to women being promoted within companies, it is the male counterparts that need to be focused on helping with this. This is something she says ViaSat’s CEO is very proactive at, together with increasing the overall diversity of staff at ViaSat.

But things don’t just happen automatically. “There needs to be accountability to ensure things are being done.”

When do you think the aviation industry will reach 50/50 figures for men and women in leadership positions? Let us know in the comments below!