Storm Ciara is currently (Sunday 9th Feb) causing havoc over the UK and Ireland (‘Will you listen to that wind!’) with flooding and powerful winds of 60 km/hr and gusts reaching as much as 120 km/hr over Scotland. Similar conditions are expected until Tuesday 11th February. 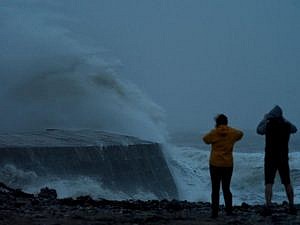 As much as severe weather causes much disruption and discomfort on the ground, you might just reap the benefits if you’re flying—but in this case only eastbound over the Atlantic.

Late on Saturday evening, British Airways flight 112–a Boeing 747-400–took just four hours and 56 minutes to travel the New York/London route, riding the east-bound jet stream which spawned Storm Ciara. The jet stream speed touched 400 km/hr (250 mph) during the night, resulting in groundspeed for BA112 of over 1280 km/hr. (800mph) That appears to exceed the speed of sound, but is the speed over the ground, rather than airspeed.

The average time to make the crossing is six hours and 13 minutes.

The previous trans-Atlantic record was held by Norwegian of five hours 13 minutes in January 2018 in a 787-9 Dreamliner from JFK to London Gatwick.

The much-missed Concorde has the fastest commercial trans-Atlantic time of two hours and 53 minutes and the all-time record for any aircraft is one hour and 56 minutes by the legendary Lockheed SR-71 Blackbird.

Willie Walsh Criticises the Response to Opening up...