Cirium: Australia and New Zealand on the Road to Capacity Recovery

Travel data and analytics expert Cirium has revealed that its data regarding seat capacity trends for passenger jets flown highlights the contrasting fortunes of the Indian and combined Australian and New Zealand travel markets.

According to Cirium’s data, India is currently grappling with an unprecedented wave of coronavirus infections, while New Zealand and Australia have begun to reap the benefits of their recently launched ‘travel bubble’ as reported by Travel Radar journalist Charlotte Barcham earlier this month. On 22 April, India reported its highest new single-day record for COVID-19 cases – more than 310,000.

The analytics company’s data demonstrates that India has seen a sharp drop off in flown seat capacity for both domestic and international flights recently, following a one-third fall in domestic traffic since mid-March. This has resulted in a decline from around 280,000 daily passengers to just 170,000 on 19 April. However, Indian airlines transported more than 400,000 domestic passengers daily before the pandemic begun. 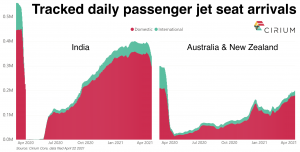 Australia and New Zealand are now allowing quarantine-free travel between the two countries following the closing of their borders for more than a year. Cirium says that Qantas and its affiliate Jetstar plan to operate more than 200 weekly services between the two countries, and also states that Qantas Group CEO Alan Joyce has reported “tens of thousands of bookings” within a few days of seats being offered for sale.

The number of domestic flights in both countries also continues to grow steadily.

Air Cargo: the Differences between Traditional Airlines and Integrated Carriers