Travel data and analytics expert Cirium has shared findings discovered by the company’s analysis that maps out the Boeing 737 MAX’s progress in returning to service.

The analysis shows the aircraft is coming back strong. European carriers are now also operating the plane, lifting the in-service fleet above 100 for the first time since the type resumed revenue flights in early December 2020. These include TUI which flies Belgium’s two in-service aircraft, registering six tracked flights, and Czech Republic’s Smartwings which also recorded six flights with a single aircraft.

The MAX programme received a further affirmation on 1 March when United Airlines, which currently operates 12 aircraft with 18 in storage, announced an order for an additional 25 planes, taking its backlog to 188.

Saudi Arabia’s regulator has also now approved the MAX to re-enter service, while Australia became the first country in the Asia Pacific region on 26 February to lift its ban on MAX flights to and from the country. 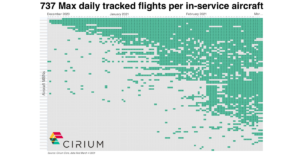 According to Cirium, 12 operators of the aircraft type logged over 1,300 flights during the seven days to 3 March, with American Airlines operating the largest number. It operated nearly 400 services using 27 aircraft out of 31 that have so far returned to operation.

In South America, Brazilian carrier Gol was the first airline to resume commercial flights on 9 December. It flew its eight planes for an average of nearly 11 hours daily during the past week. Over seven days, Gol’s MAX aircraft delivered more than 82 million available seat kilometres (ASKs).

It remains unclear when the MAX will return to flight status in the crucial Chinese market, with that country’s regulator yet to agree a schedule for re-certification test flights. Cirium fleets data shows Chinese operators have 97 MAX aircraft in storage and a further 209 firm orders allocated to them.

The in-service MAX fleet previously peaked at 360 aircraft in early 2019 before the plane’s worldwide grounding following fatal crashes in Indonesia and Ethiopia.