Currently, China Southern Airline (CSAIR) has the largest hangar in Asia to date, boasting an incredible amount of space that is equal to five football fields and 96 basketball courts at one of the world’s biggest airports, Beijing Daxing International Airport.

What is a Hangar?

An aircraft hangar is a closed building structure whereby an area of space is offered up for the storage and maintenance of aircrafts and can be made from metal, steel, or wood. Nowadays, most hangars are used for the commercial aviation sector or for military purposes depending on a country’s projects and proposals; China’s CSAIR choosing the former.

In their bid to set a world record China provided us with Beijing Daxing International Airport, ‘the biggest airport in the world’ they claim alongside Istanbul Airport, yet to further themselves even more they built Asia’s largest maintenance hangar, beating their A380 hangar that was erected by the same design company, China Aviation Planning and Design Institute of the Aviation Industry Corporation of China (CAPDI). 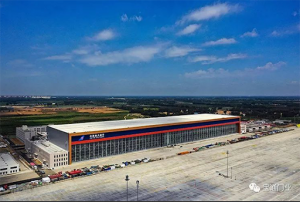 [CSAIR’S Maintenance Hangar from the Outside] | © [Google] 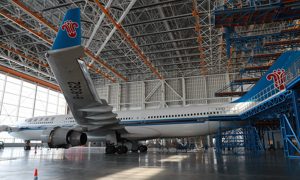 [CSAIR’s Maintenace Hangar on the Inside] | © [GameCo]

CSAIR’s hangar is over 40,000 square metres big comprising a maintenance hall that is attached to a four-storey tall building with the capacity to hold three wide-bodied and three narrow-bodied airplanes, or two A380 aircrafts, three B777s and three A320s at the same time.

Hanging on to a Record

CSAIR’s maintenance hangar outrivals its Asian counterparts, including AeroAsia’s aircraft maintenance facility that is located at Soekarno Hatta International Airport on the outskirts of Jakarta, which is deemed Southeast Asia’s biggest facility to date.

Although the facility covers more than a million square metres of built-up floor space and four hangars, its three respective hangars (for heavy maintenance of widebody aircraft, minor maintenance, storage of its Airbus A330 fleet) each cover just over 22,000 square metres, the exception being its fourth hangar which covers 66,940 square metres but that is used to store up to 16 narrowbody aircraft whilst one line is dedicated for aircraft painting.

Taken together CSAIR’s maintenance hangar beats all for their one hangar covers double the amount of two standard hangars at Asia’s leading airports. Had AeroAsia decided to use their fourth hangar to store widebody aircrafts as well, the record perhaps would have been much different…

What do you think of China Southern Air’s achievement? Let us know in the comments below.

Flying Solo: How Would a Child Fly Alone?