As dawn broke in Chernobyl on an ill-fated Saturday morning in April 1986, two photographers and a pilot ventured somewhere no man, woman or child had been before. Igor Fedorovich Kostin took the first documented aerial photo of the accident having only just returned from Afghanistan. Igor worked for Novosti Press Agency (РИА Новости) who were based in Kyiv at the time. Despite the Soviet Union’s best attempts at silencing the events that had unfolded on the 26th of April, Igor’s shocking image headlined every newspaper and TV screen around the world.

Now you have the opportunity to sit where Igor did, nearly 35 years later. Ukraine International Airlines is flying a low altitude route above Chernobyl and the Antonov factory airfield in Gostomel. UIA said that the Chernobyl-inspired route became highly requested amongst the airline’s beloved customers with additional dates now being planned beyond the sold-out flight on the 7th of March. 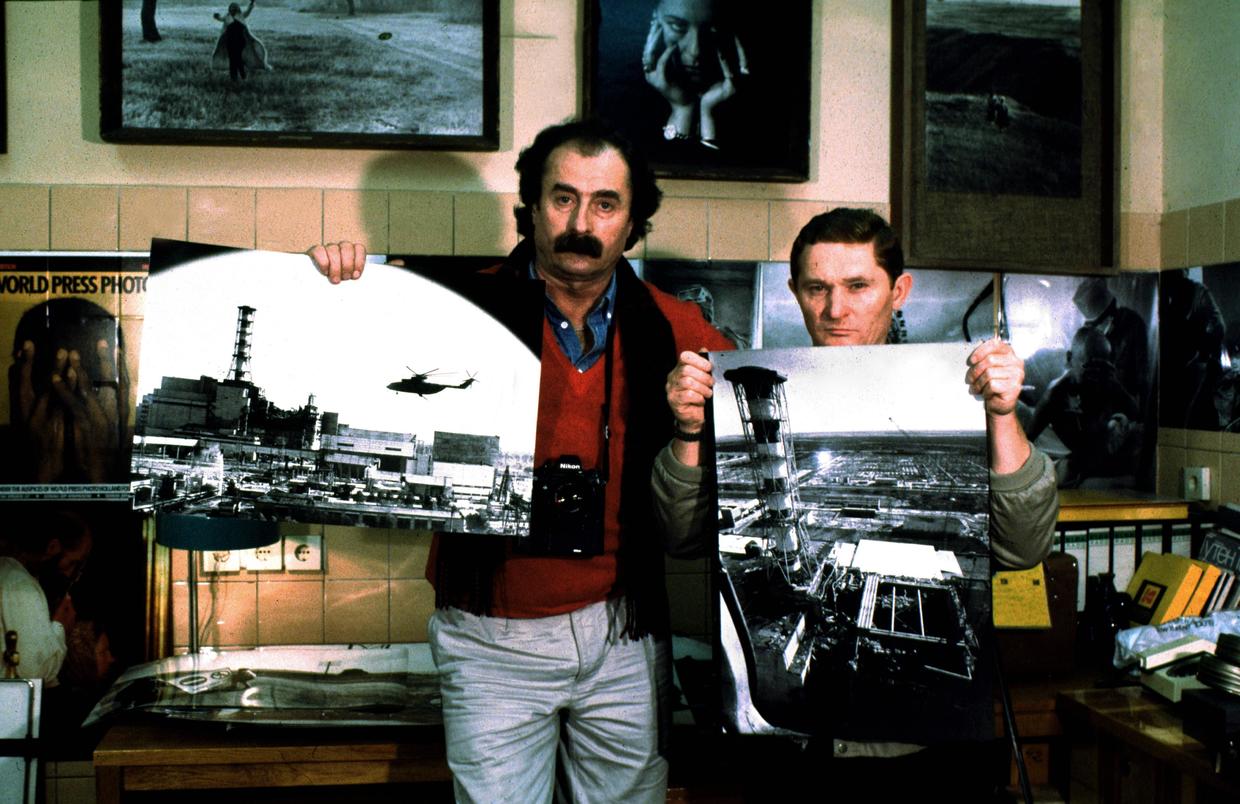 The fearless photographers pose with their famous images of Chernobyl, taken from a helicopter on the 26th of April 1986. Photo: SHONE/GAMMA-RAPHO VIA GETTY IMAGES

The fearless Chernobyl photographers poked their heads out of the helicopter doors to snap photos of the reactor, and little did they know how much radiation they were exposed to at the time. Igor recalled experiencing an odd feeling combined with high temperatures and a thick, glowing toxic smog. All these factors are synonymous with radiation and not a standard fire. However, Igor and his fellow crew didn’t vacate until he noticed his camera begin to malfunction. When Igor arrived back in Kyiv that day, all but one imagine appeared unsalvageable. This was due to the radiation damaging the film in such a way that all the negatives showed up black. Much like when a film strip is pre-maturely exposed to light.

While you may not get as close to the reactor as Igor, you’ll no doubt still feel nostalgic passing over the site. Nearly 600 Soviet pilots stepped up and risked their lives to save many millions of lives. It was a sacrifice that had to be made for the greater good, and someone had to plug the exposed reactor. It took thousands of helicopter trips to cover the now entombed reactor 4. 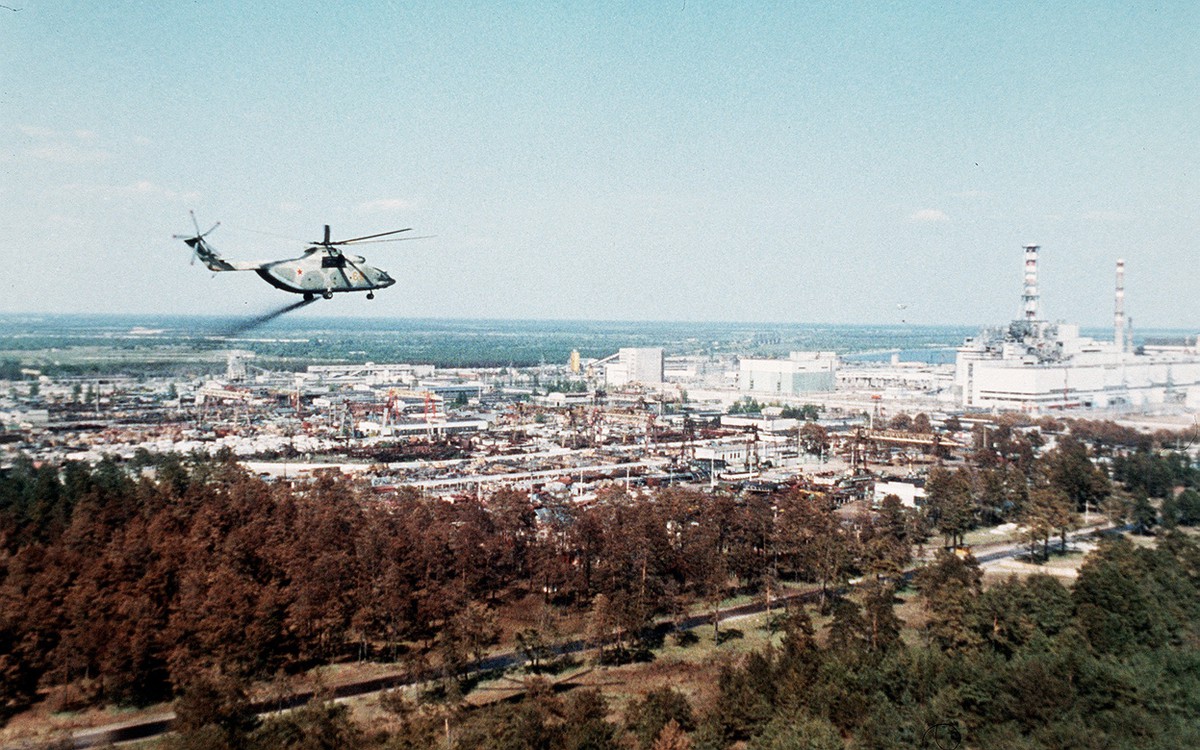 After HBO’s hit series “Chernobyl” graced our screens back in 2019, there has been a revival of interest in Ukraine’s infamous power plant. If by chance you are still unaware of the events that unfolded at Chernobyl in 1986, it was the site of the most catastrophic nuclear accident the world has ever seen. The effects of the disaster are still felt today, all around the world. Only a handful of people died at the scene due to the explosion however many hundreds of thousands of people have since died from the fallout. So many that the official number is highly contested and will likely never be known due to varying factors and inaccurate soviet reports.

Chernobyl used four soviet RBMK-1000 nuclear reactors which are now largely recognised as inherently flawed. While most nuclear reactors use water to cool and moderate their core temperature and reactivity, RBMKs used graphite rods. The design allowed for a continuous nuclear reaction to occur in the core. Ultimately, everything went pear-shaped during a routine maintenance check, when vital control systems were shut off. Inadequately trained staff were left to control a flawed design which resulted in a sequence of devastating events, followed by two major explosions. The split-second events led to decades of devastation and as what many described as the “beginning of the end of the soviet union”. 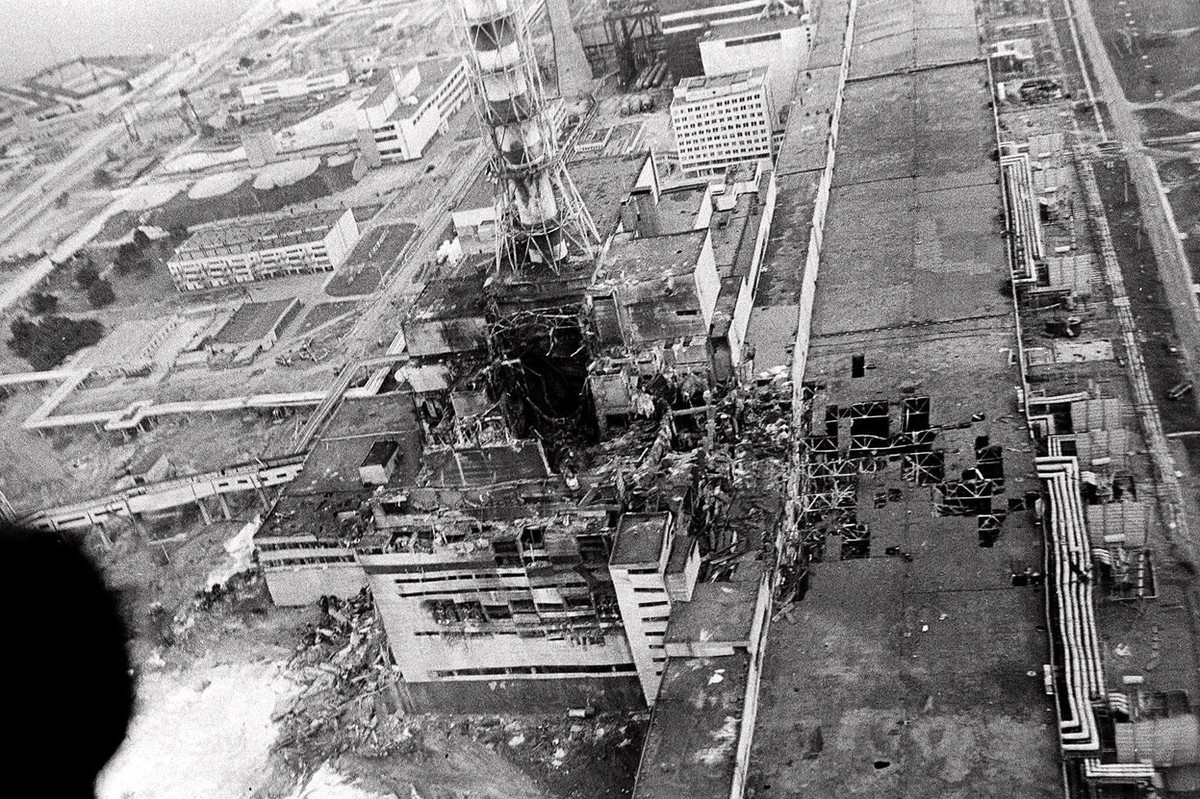 Chernobyl reactor 4 as seen from a helicopter in May 1986. Much of the core’s contents is scattered on the surrounding roof and ground which includes the graphite rods. Photo: AP Photo / The Atlantic

As we reported yesterday, the “flight to nowhere” is set to depart from Kyiv Boryspil International Airport and fly above the Dnieper river before turning around near the Belarusian border. The pilot will then direct you back towards Kyiv via the Gostomel Antonov Airport, where the world’s largest aircraft, the AN-225 is based. Many airlines around the world have tried their hand at creating a version of “a flight to nowhere” in an attempt to generate some income as well as satisfying their customers craving for travel. Qantas kickstarted the movement in some manner of speaking, with a flight around Australia’s famous Ayres rock departing from and returning to Sydney. The Qantas flight sold out rapidly sparking the brainwaves of many major airlines around the world. However, UIA have gone above and beyond to make this not just a journey but an experience. 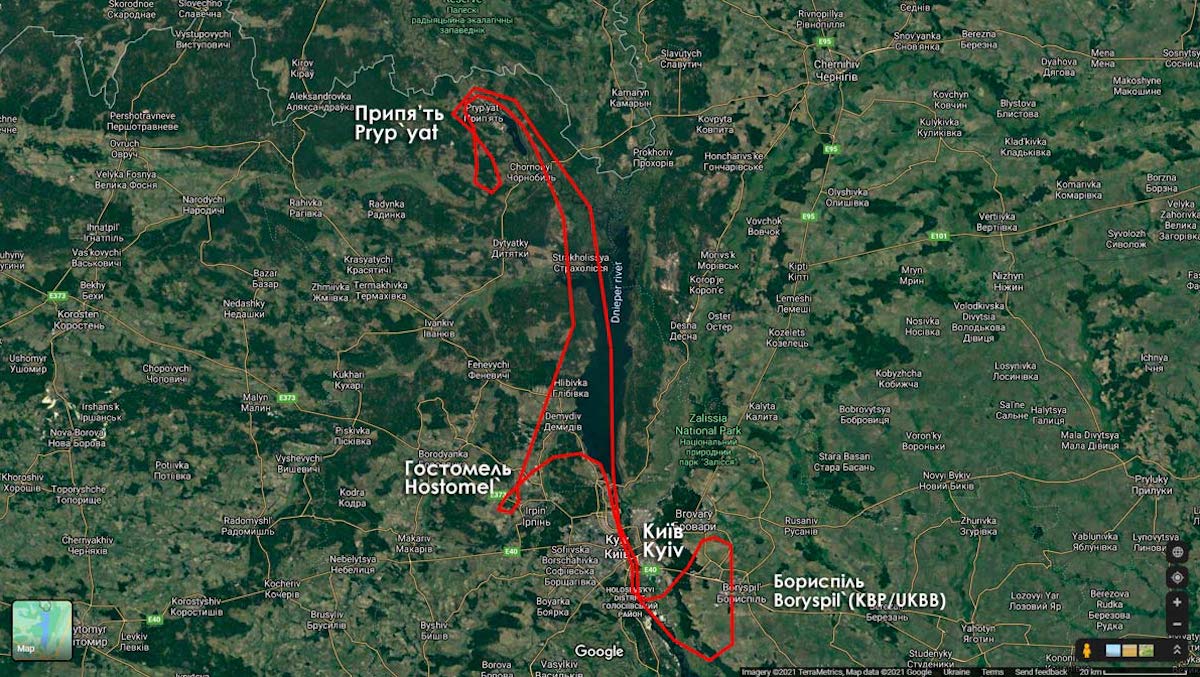 For anyone interested, the original flight is marketed at around US$95 (£68) and set to last around 70 minutes. Those lucky enough to get a ticket will get to fly in a UIA Embraer 195 at an altitude of just 900 metres. Despite the lure of visiting Chernobyl from above, the experience includes far more than just a sightseeing tour. Ticket holders will get to take a photo with the pilot in the cockpit, a tour of a Boeing 777 at Boryspil Airport as well as souvenirs and gifts. Passengers will be accompanied in the cabin by UIA pilots who will act as “tour guides” while sharing their aviation stories and answering questions. 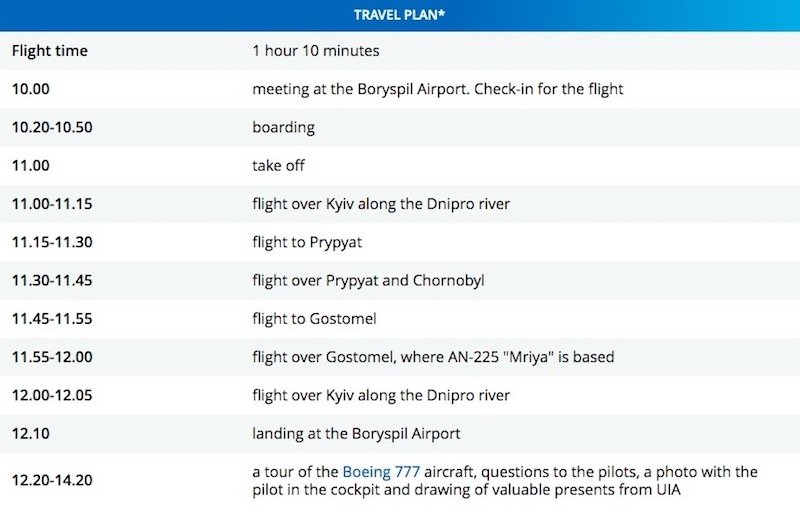 UIA mentions on its website that the flight would be a great opportunity for someone afraid of flying to appease their fear. A statement from the website goes on to say “pilots will be happy to answer many questions and dispel the myths that are shrouded in aviation. What professional superstitions do pilots have? Is it true that the autopilot does all the work in flight? Can you fly without engines? What is turbulence and should you be afraid of it? And many more secrets and life hacks!”. 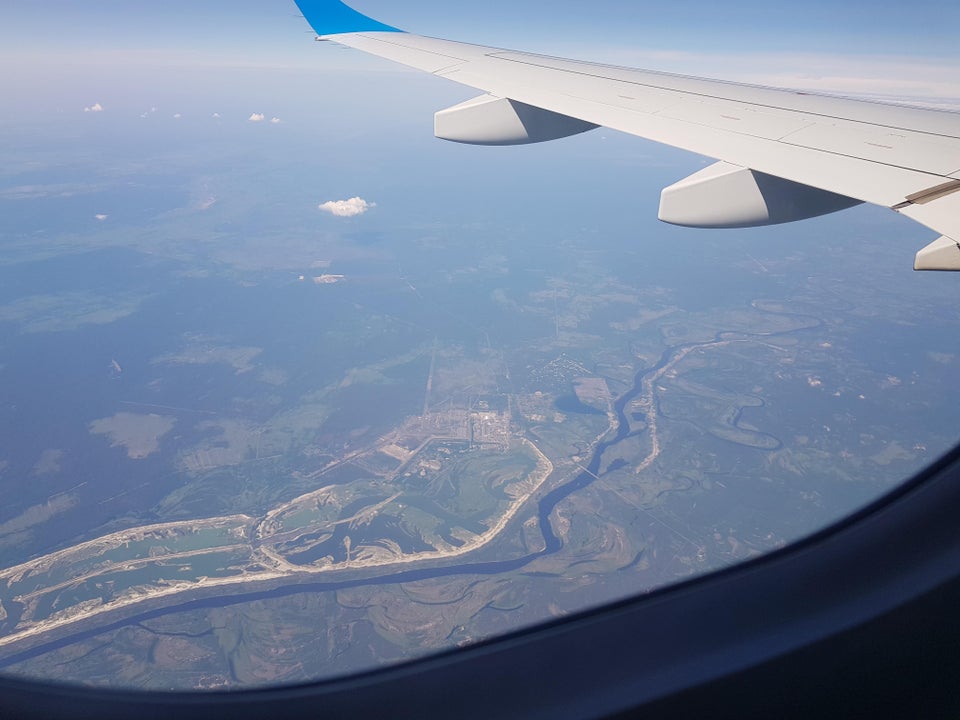 The Chernobyl 30km exclusion zone and Dnieper river as seen from the window of a UIA flight in 2019. Photo: Reddit u/RRyyas

Understandably, many people may worry about radiation in and around Chernobyl still. However, a CT scan will expose you to around 3,000 times more radiation than an entire day inside the exclusion zone. Regardless, you’ll be safe 900 metres up in the sky, where the flight will spend less time above the zone than it takes to make a cup of coffee. If your curiosity has peaked by UIA’s unique offering, you may also be interested to know that the airline run a number of ground tours. UIA offer 1-day tours, 2-day tours, private one to one tours and group tours. The tour includes visits to Chernobyl and Prypiat, the infamous town where nearly 60,000 people had to evacuate 36 hours after the disaster occurred. The town of Prypiat mostly served as a home for the workers at the plant and now remains abandoned and uninhabitable. 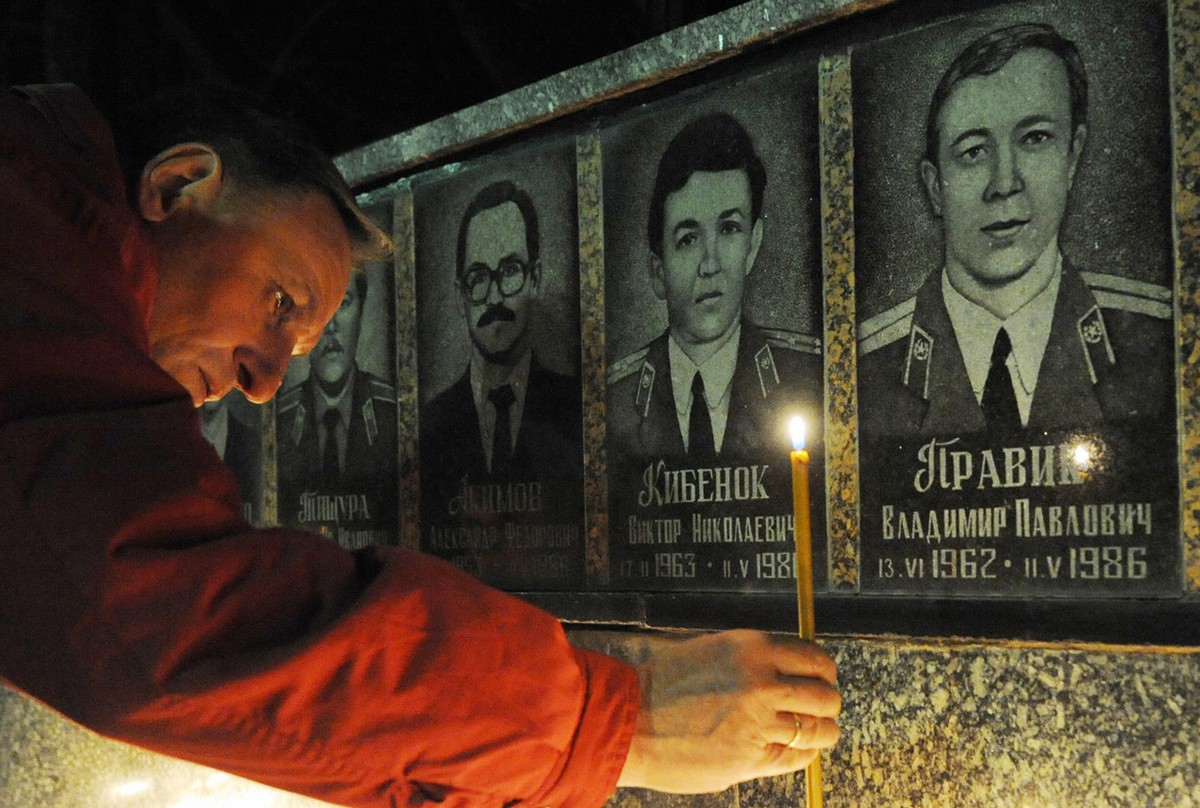 A man pays his respects to the heroes of Chernobyl by lighting a candle at the Chernobyl victims’ monument in Slavutich, a town 50km from the plant. Photo: SERGEI SUPINSKY/AFP/Getty Images

Like the gentleman above, to this day many still remember the events that unfolded at Chernobyl vividly. UIA’s unique flight offers a great opportunity to get a differing perspective of the site that many will never get to experience. Even if Chernobyl fails to peak your interest, the rest of the journey is bound to be fascinating with all that UIA has prepared. And for those of you unable to travel to Ukraine, don’t forget to check out Travel Radar’s list of airports that are destinations in themselves for some added travel inspiration!

So will your next flight be a conventional trip to a secluded tropical island or a tour above the world’s most catastrophic nuclear disaster? Let us know your thoughts in the comments! Meanwhile, wherever you may be in the world right now, stay safe and hang in there.

Qatar Airways to be Official Airline for UEFA Euros This Summer