Qatar Airways to be Official Airline for UEFA Euros This Summer

Qatar Airways has announced they will partner with The Union of European Football Associations (UEFA) as the tournament’s official airline sponsor this summer.

Expanding Their Presence Across Europe

The deal means that Qatar Airways will serve all the host cities either directly or through airline partners throughout the month-long event from June 11 to July 11 this summer. Dublin and Glasgow are amongst the 12 cities currently in the line up with London’s Wembley Stadium set to host the final. It also means the Qatar Airways brand will feature prominently across all digital platforms and stadiums over the course of the tournament.

The football event usually occurs every four years but was postponed last year due to Covid. 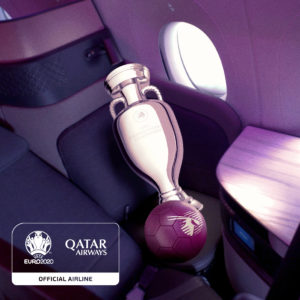 Qatar Airways will be a partner with the UEFA © @QatarAirways Twitter.

Qatar’s Relationship with the UEFA

The airline’s Group Chief Executive, His Excellency Mr. Akbar Al Baker, said: “Qatar Airways is pleased to partner with UEFA to connect players, fans, and officials across the globe through our world-class service. The power of sport to unite people is unrivaled, and this partnership with UEFA EURO 2020™ is an excellent opportunity for us to witness the very best in European football. Furthermore, this alliance illustrates our commitment to Europe and accentuates our growing sporting partnership portfolio.” 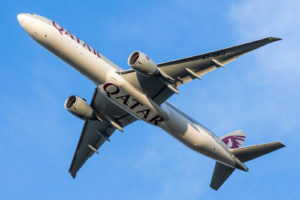 UEFA director of Marketing, Guy-Laurent Epstein, added: “We are delighted to welcome Qatar Airways on board as an Official Partner of UEFA EURO 2020™. Like sport, travel unites us.”

It’s not the first time this airline has strengthened its presence in the world of sport. Qatar has also worked with the likes of FIFA and Football Club Bayern München! Be sure to look out for their logo when the Euros kick off in June.

Where do you think this airline will spread its wings to next?