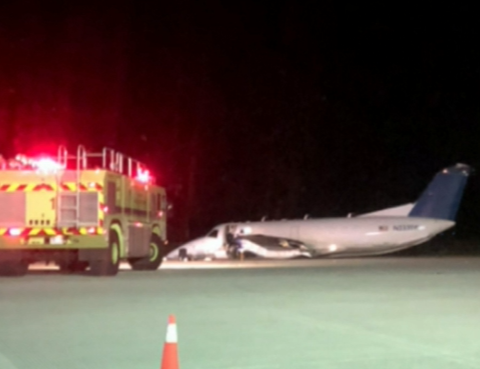 The aircraft with registration N233SW performed flight BYA-233 from Detroit-Willow Run Airport to Akron-Canton Regional Airport with 2 crew members on board. The aircraft departed at 04:37 UTC.

The aircraft was climbing out of Detroit when the crew stopped the climb at around 13,800 feet, declaring an emergency due to a landing gear problem. The aircraft returned for an emergency belly landing.

Data entered in the Federal Aviation Administration (FAA) accident and incident registration system specified, the aircraft was operated by Berry Aviation, a chartered flight company based in Texas. The FAA system detailed that the aircraft was performing a cargo flight, and both the crew members were not injured in the incident.

Two low passes were made parallel to the Detroit runway 5R at about 500 feet, reportedly to confirm whether the landing gear was down or not, and then the belly landing was made shortly at 05:08 UTC.

According to Airfleets data , Beery Aviation has a fleet of 12 aircraft comprising of nine Embraer EMB-120 Brasilia, in addition to three De Havilland Dash 8-200 twin-engine turboprop. However, the three Dash 8-200s are parked as of now.

Widerøe To Develop All-Electric Aircraft By 2026

Read More
This Saturday, on October 16, eligible New Zealanders, in what is being called “Super Saturday” will have the…
Read More
A man claims to have hacked an Indian airline’s website to retrieve his missing luggage. The 28-year-old, named…