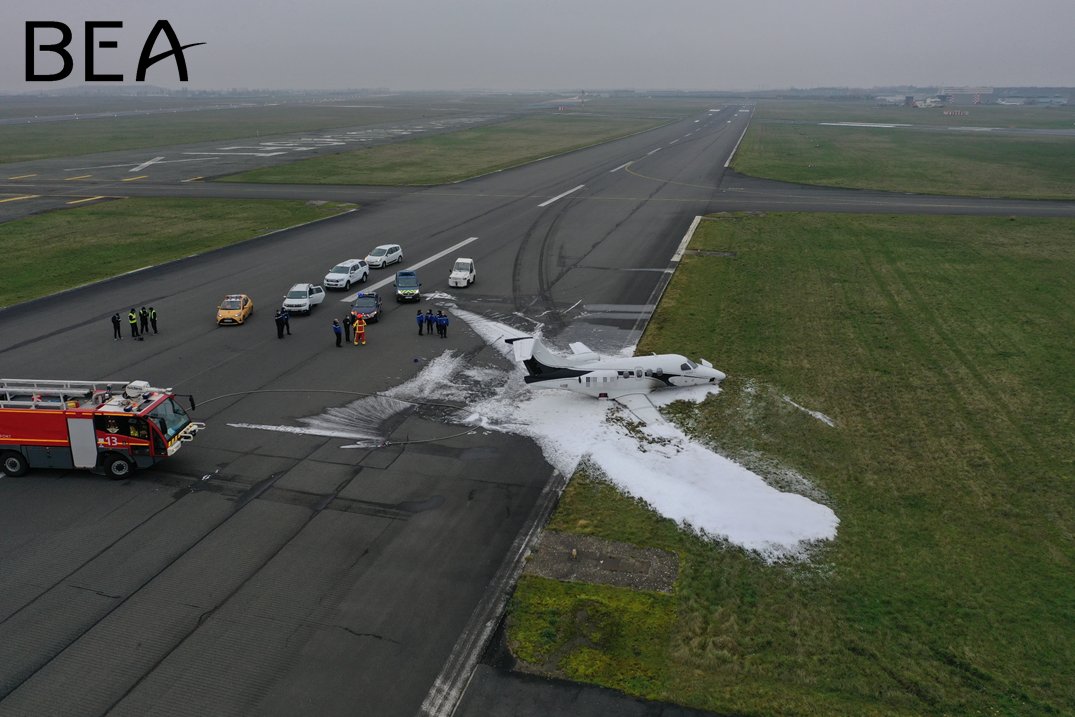 An Embraer Phenom 100 business jet suffered a runway excursion after landing at Paris-Le Bourget Airport on late Monday morning 8 February. All three people on board were reported to have suffered minor injuries.

The private business jet with registration 9H-FAM belonging to Maltese airline Luxwing was operating flight LWG301 from Venice Marco Polo Airport in Italy to Paris-Le Bourget Airport. The aircraft landed at around 11:00 on Monday.

The aircraft touched down on its belly as its gear was still retracted due to some unknown reasons. As a result, the aircraft slipped for several hundred metres before coming to a stop at the edge of the runway.

Eventually, the aircraft caught fire but the fire was quickly taken under control by the firefighters already positioned on site. The three people on board were reported to have suffered minor injuries and were taken care of by the emergency services shortly.

Investigators from the Bureau of Investigation and Analysis for Civil Aviation Safety started to investigate the incident the same day. They have extracted the black box for analysis.

Luxwing commented on the incident on its website: “Following the accident that occurred earlier yesterday, the 8th of February 2021, at Paris Le Bourget Airport involving an Embraer Phenom 100 (9H-FAM), Luxwing has immediately commissioned an internal investigation to determine the causes that led to this unfortunate accident. Luxwing is working closely with the officials at Le Bourget Airport and with BEA inspectors and is providing all support necessary to help with the ongoing investigations. No fatalities or serious injuries were registered. Safety of our passengers and crew is a core value for us and will continue to be our top priority. We shall provide further information as the investigation develops in the coming days.”

Located seven kilometres North of Paris,  Paris-Le Bourget Airport has three runways and can accommodate all types of aircraft. Every two years, the airport hosts the International Paris Air Show.

This year’s Paris Air Show has been cancelled due to the uncertainty caused by the Coronavirus pandemic.

TUI Expects to Run at 80% Capacity this Summer

Read More
There’s plenty of discussion at the moment on the ‘fifth freedom’ rights; what are they? There are nine…
Read More
Iceland’s newest low-cost carrier PLAY has signed on for two new Airbus A320neo aircraft through an agreement with…