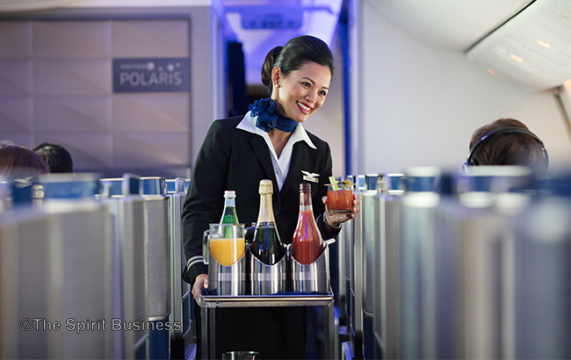 Once just for the flying elite, cocktails have become widely available in-flight in recent times. Many airlines have created signature cocktails that travellers remember long after they have left the airport. Not only are signature cocktails a little flamboyant and fancy, but it’s also a strategic win for airlines making post-pandemic air travel more comfortable.

Here are some of the best signature cocktails to enjoy while flying at 37,000 feet!

Whether you are flying trans-Atlantic, riding out the kangaroo route or just island hopping on holiday, any flight can be made better with a carefully curated cocktail. These 12 airlines agree and have even gone to the length of creating their own blissful masterpieces.

London City Signature served between London City to New York JFK on the carrier’s all-business class service. It is a gin-based cocktail and is the best way to get the party started. This combination, which tastes like a gin and tonic with a kick, looks like the ideal complement to one of the world’s busiest business travel air routes.

Also, Bucks Fizz or Kir Royal, British Airways’s hallmark beverages, are available in Business and First class. It’s frequently given as a welcome cocktail or as an aperitif after a flight.

The Evergreen Special, created by Eva Air of Taiwan, is a mix of melon liqueur, vodka, and lemonade. The Aurora, which is made with gin, Cointreau, green mint liqueur, tonic water, and Sprite is also available.

The Beloved Hue cocktail, a Phan Thiet Red Dunes cocktail with a soft sweet red hue, is available on Vietnam Airlines. The Gongs Dance Cocktail is also one of their signature drinks.

The Singapore Sling prepared with a mix of dry gin, DOM Benedictine, Cointreau, cherry brandy, Angostura bitters, and Grenadine with lime and pineapple juice is one of the most loved drinks. Fun fact, it is based on the same recipe created by Raffles Singapore.

Cathay Pacific has put a lot of effort into its beverage selection. The airline has distinctive cocktails, and a signature beer called Betsy, which is named after its first plane. The widely acclaimed Betsy beer is brewed exclusively for Cathay Pacific, with ingredients sourced from all of the routes served by the airline.

Unlike many signature drinks, which are only offered in Business and First-class cabins, Japan Airlines’s signature drink, Sky Time, is available in all cabins and was the third most popular beverage on JAL flights after beer and wine.

Simply turn the carton over to reveal the ingredients in the pre-mixed drink. While successive versions of the drink contain different components, the most recent version has 3% kiwi juice and is fortified with vitamin C and Royal Jelly.

A welcome drink mixed with lemon juice and mint is served to passengers in Qatar’s Business and First-class cabins. Fresh fruit juices and distinctive mocktails like the Pineapple Margarita and Corniche Cranberry Refresher are also served.

United doesn’t have a signature cocktail, but it does regionalise its offerings, such as the Trader Vic’s Mai Tai, between the continental United States and Hawaii route, and the Knob Creek and Old Fashioned by On The Rocks Cocktails, on most mainline United flights within North America. This is also including Hawaii and the Caribbean.

The Mint cocktail, a spritzy honey-infused limeade with vodka, lime, club soda, and of course mint, is JetBlue’s house cocktail in Mint class. With JetBlue now flying transatlantic, this makes the perfect refresher!

The Blue Sky, a mix of Lapponia Blueberry Liqueur and Joseph Perrier Cuvée Royale Brut, is Finnair’s signature cocktail. In many aspects, the cocktail is similar to a blueberry mimosa in that the champagne enhances the flavour of the blueberry liqueur, much like a mimosa does.

One of the company’s famous non-alcoholic Wau Emas cocktail, created with pineapple juice, soda water, pandan syrup, and a touch of lime, can be found in Malaysia’s Business class. With the tart pineapple juice cutting through the floral sweetness of the pandan syrup, the drink is well-balanced for the Asian climate with the effervescent soda water lifting the drink and adding a refreshing aspect.

Signature cocktails are a great idea, and maybe other airlines will follow suit. I enjoy how they strive to represent an airline’s logo, such as Finnair’s blue, borrowing from the airline’s name like Eva Air did and Cathay Pacific’s signature green colouring its drink.

Have you ever tried a signature cocktail while flying? Are there any that come to mind as particularly memorable? Let us know in the comments below.

Read Article
Analysis by travel data and analytics expert Cirium regarding the Boeing 737 MAX aircraft in Europe reveals that…
Read Article
Boeing is set to debut its newest widebody jet, the 777X, at the 2021 Dubai Airshow later this…