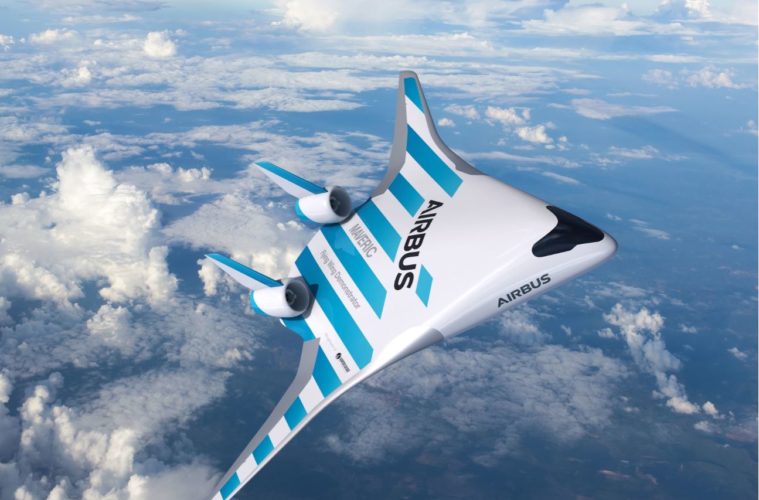 Yesterday (Tuesday) Airbus revealed a new ‘blended wing body’ design, they claim with the potential to reduce fuel and therefore carbon emissions by 20%.

The European manufacturer displayed a remote-controlled model of the design at the Singapore Airshow 2020. The model—called Model Aircraft for Validation and Experimentation of Robust Innovative Controls or ‘MAVERIC’ for short—is 2m long and 3.2m wide and smoothly joins the wings with the aircraft body in a configuration intended to drastically reduce aerodynamic drag.

Airbus has been testing the design at an undisclosed location in France since the middle of last year.

Since the earliest days of powered flight, almost all aircraft have had a single basic design; a tube with wings attached at essentially right-angles. In an attempt to find improved efficiencies, some attempts have been made at different approaches, most notably the ‘lifting body’ such as the Martin X-24 and the ‘flying wing’ including the Northrop YB-35 and more recently (and more successfully) the Northrop B-2 Spirit stealth bomber. But these are all military aircraft with little or no consideration of how to economically carry passengers, a much more complicated challenge.

These radical alternatives to conventional design have been problematic, largely due to the difficulties of achieving stable control, a key consideration. But Airbus believe they have found the answers. The project manager of MAVERIC, Adrien Bérard said, ‘Initially, many dismissed the MAVERIC project as merely a ‘hobby,’ or, in other words, a project Airbus wouldn’t learn very much from, so we had to prove them wrong by showing that we could deliver a very sound basis for future aircraft configuration.’ Airbus Executive Vice President of Engineering, Jean-Brice Dumont expanded on the concept, noting advances in flight control technology and weight reduction allowed Airbus to consider the radical design.

But flying in the full-size successor to the MAVERIC isn’t going to happen soon. ‘Although there is no specific timeline for entry-into-service, this technological demonstrator could be instrumental in bringing about change in commercial aircraft architectures for an environmentally sustainable future for the aviation industry,’ said Dumont.

With the possible exception of the Concorde, advances in aircraft design have been incremental. With the extraordinary architecture of the MAVERIC, perhaps Airbus really will have a revolutionary breakthrough in the next decade, and the days of flying in a tube are numbered…

Read More
Following airspace closures from many countries and the threat of aircraft repossession from foreign lessors, most Russian airlines…
Read More
Dubai in the UAE was a big holiday destination for Brits earlier this year when many other countries…