Why Israeli Airports Have the Most Impenetrable Airport Security

Emptying your pockets, discarding your liquid items, and tortuously removing your clothing – Airport security is an infamously cumbersome process. The obstacle course can often include an intrusive “pat down” or standing with your arms up in a sophisticated X-ray machine that scans for everything that may lay between your skin and your bones. Since 9/11 and the surge of terrorist attacks that followed, airport security reached a laser-sharp degree of strictness, and understandably. In return for higher security, however, airports have had to sacrifice efficiency and punctuality, thereby increasing the time it takes to get from check-in to boarding.

Shockingly, however, recent studies from US airports have suggested that the TSA fails to detect 80% of illegal items put through the scanners. Despite the sizeable platoon of equipment and security staff, the reality is that most dangerous make it through the system without detection. This unnerving revelation puts airports in an awkward dilemma. On the one hand, to fortify the checks even further would only lead to longer turnaround times and longer delays, and steeper costs for the airports and airlines. This then begs the question as to whether there’s a more effective model of keeping our skies secure.

It’s in this void where the Israeli model comes in. Surrounded by hostile neighbors from every direction, Israel has navigated a dangerous security environment since its inception. The threat of plane hijackings, as well as airport terrorist attacks, has been all too real to ignore. And, evidently, the gaps in the conventional airport security system are too large to fulfill the needs of Israel’s national security. That said, instead of filling those gaps with even tighter security measures, Israel has instead adopted an alternative method to maintaining security. At the heart of Israel’s approach is the “human factor” behind criminal activity. After all, crimes are always committed by humans, instead of their weapons alone. 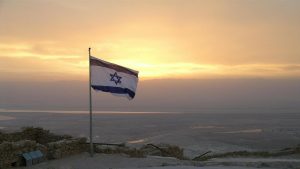 Israel is located in a volatile neighbourhood.

To see how this works in the real world, let’s take a look at Tel Aviv’s Ben–Gurion Airport. Surprisingly, Ben–Gurion‘s security isn’t much more technologically advanced or otherworldly than most other large airports. Instead, the existing security arrangements have been supplemented with the use of “human intuition” to weed out the criminals and fugitives. As many travelers to Israel will have noticed, the first step before you can even check–in is a one-on-one interview. Person-to-person interviews are designed to “put you on the spot,” ask you questions about your purpose of travel, and detect signs of hesitancy, inconsistency, or nervousness. Based on your responses, the interviewer assigns you a score from 1 to 6, 1 being “secure” and six being the highest risk.” For those lucky enough to score low, they can smoothly pass through the remaining elements of the security process. Those with higher scores, like 5 or 6, are then subject to additional questioning and pat-downs. Throughout the process, you will also be monitored by plain-clothed agents snooping around the terminal, fishing for anyone who looks “suspicious.” In summary, by instilling a heightened focus on the human dimension of criminal activity, Israeli airport security can identify far more risky passengers than our conventional systems, making for a more effective security process.

But, as it becomes quickly apparent, the system doesn’t come without its fair share of controversy. See, much of the ranking system between 1 to 6 relies heavily on “racial profiling,” which even Israel isn’t hesitant to admit. This makes the replication of such a system in western countries simply untenable. Additionally, the increase in time and the “opportunity costs” of a similarly modeled system would make it uneconomical for much of the aviation industry. As a result, it is highly unlikely that this system will ever be seen in Europe or even in the security-savvy United States. The trade-off between security, feasibility, and economic costs would be unacceptable for most of the West’s larger airports. Not only do they handle a significantly larger load of passengers, but the element of racial profiling would also be met with rightful indignation from the respective societies.

Nonetheless, Israel isn’t changing its mind anytime soon, based on its unique set of security needs. What’s more, the rest of the world may never need to follow suit, either. The reduction in plane hijackings and terrorist attacks in the past decade suggests that the current system isn’t entirely ineffective. The “psychological effect” of the visibly stringent security and their use instead of more comprehensive measures outside the airports combine to make the skies generally safe for everyone. As a result, perhaps a heterogeneous set of security measures to meet an equally diverse set of security needs may not be an entirely bad thing. That is, as long as our skies remain safe for the incoming future.

Electric planes have landed and they’re here to...