In an effort to tackle the issue of climate change within the aviation industry, the Swedish government is preparing to impose takeoff and landing emission fees on aircraft, based on their environmental impact. The scheme has been introduced in an attempt to encourage airlines to use more energy-efficient fuel with lower carbon emissions.

The emission fees look set to come into effect at the beginning of July, subject to approval by the Swedish parliament. The emission fees would make Sweden the first country in Europe to directly press air transport charges on airlines and airports. The initiative will initially be trialed on two of Sweden’s busiest airports, including Stockholm Arlanda and Gothenburg Landvetter. 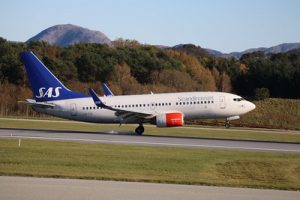 Image of SAS airliner landing on the runway

The emission fees will be calculated based on plane and fuel type. Newer planes using biofuels will be rewarded with lower fees which is far less harmful to the environment. Some of the older types of aircraft that burn fossil fuels will be hit the hardest since these types of aircraft release higher levels of pollution emissions. According to Swedish Railways, a single flight between Stockholm and Gothenburg, generates as much carbon dioxide as 40,000 train journeys.

In 2018, the campaign flight-shame, or also known as the flygskam movement was started to put pressure on swedes, a nation of frequent flyers to stop them flying in an effort to lower the impact of air travel on the planet. At the start of 2020, before the pandemic fully kicked off, Sweden recorded a 4% drop in the number of people using the country’s airports for air travel. That’s almost 2 million less people in 2020 than during 2018. Therefore, it seems clear the “flight shaming” movement has gained prominence and made a positive impact in just a few short years.

Airlines across Europe and the U.K. are increasingly getting onboard with climate-friendly schemes. France announced an ‘Eco-contribution tax’ proposal and recently suggested a ban on short-haul domestic flights that can be travelled to by train in under 2.5 hours. BA moved forward its plans to use biofuel from 2025 to next year and the UK has a similar ‘Air Passenger Duty’ tax which was put in force partly to offset carbon emissions.

The latest move by Sweden hopes to incentivise airlines to continue to switch towards newer aircraft and utilise environmentally-friendly bio-fuels to reduce climate change and promote sustainable aviation.

What do you think about Sweden’s emission fees on aircraft? Do you think this will encourage airlines to be more green? Let us know in the comments below.