Spilve, No Longer a Forgotten Airfield in Riga, Latvia

When Nik approached me, I thought he was going to ask me to leave.  I was strolling along the runway at Spilve Airport in Riga, Latvia so it would not have been a surprise. 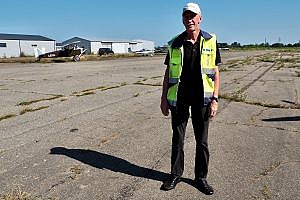 Fixed wing microlights rumbled past me and flex wings microlights buzzed above me like angry wasps.  But no.  He said that because I was not wearing a Hi Vis jacket and he was; he must walk with me. His English was surprisingly good for someone of the Soviet occupation generation.  He even chided me for having missed the air show the day before. But it did explain why the airfield resembled a car park for microlight planes.

The Terminal Building at Spilve Airport in Riga, Latvia

Spilve Airport is located five kilometres from the centre of Riga in Latvia.  Planes started flying from here in 1915.  Since then it has been a military base for the Latvian Air Force and occupying forces of Russia, Germany and the Soviet Union.  It also served as an international passenger airport.  When the Soviets captured the airfield all the original buildings were destroyed and it was renamed Riga Central Airport.  In 1954 a new terminal building was constructed in the Soviet neoclassical style.  It is one of the few Stalinist-era buildings in Riga.

The imposing exterior still displays the hammer and sickle above the main entrance.  A complete renovation of the interior in 2012 restored the magnificent great hall and Soviet murals to their original splendour.  Today it hosts art exhibitions and other events but there are plans to base a Latvian Aviation Museum here.  Beyond the main building the airfield was coming to life.

The Airfield at Spilve in Riga, Latvia

Spilve Airport was one of the largest airports in the western part of the USSR until the new Riga International airport opened in 1975.  Spilve was then used for local flights and for training students of the Riga Civil Aviation Institute until the late 1980s.  Rumours that it has since been abandoned are untrue.  Two new hangars have been built and it is becoming increasingly popular as a base for training private pilots.  Flex wing microlights were emerging from one of the new hangars, eager visitors were scrambling aboard and were soon airborne.

Nik pointed out the different planes parked alongside the runway.  A Swiss-owned Antonov An-2 registered in Latvia is awaiting a service.  A Latvian Air Force Antonov An-2R is undergoing a service.  As we chatted a helicopter from the Ukraine hovered momentarily beside us before wheeling away and heading back home.  It was a thrilling experience and such a contrast to Riga International airport my next destination.

How Qantas and Jetstar Are Preparing For The...

The Boeing 737 MAX Is Getting Ready to Fly Again – Are you ready for it?