We have reported previously on the many and various difficulties experienced by South African Airways in the last few months. The state-owned carrier has been haemorrhaging massive amounts of money for many years and has been bedevilled by a bloated workforce, rampant corruption and incompetent management. It had only been kept aloft by a series of huge cash injections by the South African government. 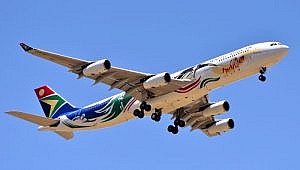 Late last year, the airline suffered a debilitating strike and added to its massive debts, was close to closure. Various possible solutions were considered, ranging from yet further bailouts to allowing the operator to nose-dive into bankruptcy. Ultimately, SAA was based in ‘business rescue’ with the apparent intention of turning its fortunes around, but more likely giving it protection from its creditors.

Urgent meetings have been held between the business rescue practitioners and creditors, the essence of which has no doubt been that recouping some of the debt is better than none.

In the latest move, SAA has put up for sale most of its fleet of thirsty A340s; four out of nine of the -600 variant and five out of seven -300s. The deal includes 15 spare engines and four APUs. The -600s are 16 years old and the -300s range from 14 to 22 years old. The A340s are used almost exclusively from Johannesburg to New York, Perth, Frankfurt, Munich and Hong Kong and a -300 on the domestic Cape Town route. All bar one of the aircraft are in current use but presumably some of the routes including New York will be operated by the four newly acquired (and much more efficient) A350s.

Bids for the purchase of the aircraft close at the end of January. Some reports have estimated the sale to realise $2,6 billion but this seems wildly optimistic, given the characteristics of the aircraft.

Indian Aviation: A Struggle to Survive for Airlines

After Effects: The Flybe Rescue