Ryanair saw year-on-year passenger numbers for December fall by 83%, according to figures released by the company on 5 January.

The Decline in Detail…

December 2020 brought 1.9 million passengers to the Irish budget airline. This compares to 11.2 million for the same period in 2019. The company said it ran 22% of its normal schedule during the time, with a load factor of 73%. 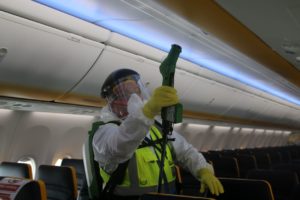 Ryanair currently lists 235 destinations, over 200 of which are in Europe, which has been described by the WHO as the epicentre of the COVID-19 outbreak.

The company, run by outspoken CEO Michael O’Leary, has also courted controversy this week with an advert suggesting ‘jab and go’ travel. The message has been seen as promoting irresponsible travel during the pandemic and led to the UK’s Advertising and Standards Authority receiving over 1600 complaints.

In better news, Ryanair reported 92% of December flights arrived on time; Some positive news in what has been a dark year for the industry.

Ryanair is an Irish low-cost airline founded in 1984. It is headquartered in Swords, Dublin, with its primary operational bases at Dublin and London Stansted airports. It forms the largest part of the Ryanair Holdings family of airlines, and has Ryanair UK, Buzz, and Malta Air as sister airlines.

Ryanair operates more than 300 Boeing 737-800 aircraft, with a single 737-700 used as a charter aircraft, as a backup, and for pilot training. The airline has been characterised by its rapid expansion, a result of the deregulation of the aviation industry in Europe in 1997 and the success of its low-cost business model. Ryanair’s route network serves 40 countries in Europe, North Africa (Morocco), and the Middle East (Israel, Lebanon and Jordan).

What’s your thoughts on returning to the sky in 2021? Let us know in the comments below!