Norse Atlantic Airways, a new airline inspired by the Norsemen who travelled and explored the world with their state-of-the art Viking longships. ‘Norse’, was founded in March 2021. It is Norway’s latest attempt at making low-cost, long-haul transatlantic travel a success. Norse plans to commence operations by summer 2022 with a fleet of 15, environmentally friendly, Boeing 787 Dreamliner’s. The aircrafts were acquired from Norwegian’s now discontinued long – haul operations. The airline plans to fly out of London, Paris and Oslo, with routes to New

York, Los Angeles and Fort Lauderdale, with more destinations yet to be confirmed. The transatlantic start up is designed to fill the gap left by Norwegian’s exit from the market earlier this year, but the airline is keen to say this is not Norwegian in a new skin. 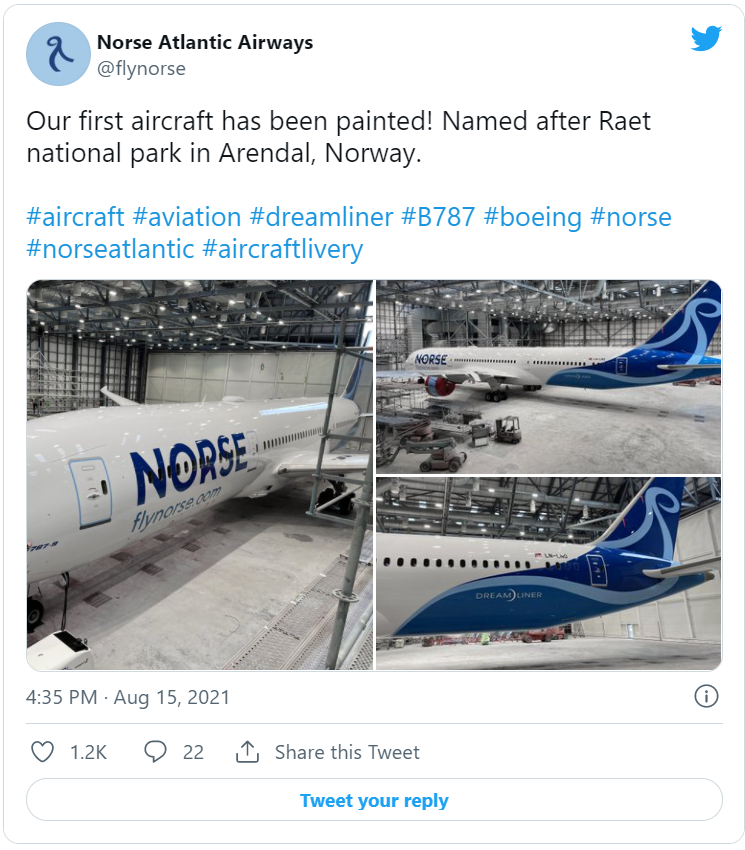 As some of the previous executives of Norwegian are behind this venture it is hard to ignore the similarities.

Norse will use the same aircraft as Norwegian, fly to the same cities as Norwegian, and is expected to hire former employees of Norwegian, from Norwegian Air Resources UK Limited.  Unite the union released a statement on August 17, regarding the planned operations out of London Gatwick. Norse has also confirmed their London hub operation from Gatwick airport. Presumably a result of the availability of Norwegians former slots and low-cost business model.

Bjørn Tore Larsen founder and CEO of Norse, is insisting that the airline has nothing to do with Norwegian and the business model is a different strategy. “Our business model is very different from any other model that has been tested. We are creating a low-cost long-haul operation. It’s a very lean operation and we know we can make good profits based on the cost base we have,” said Larsen. The difference between the two airlines is Norse intends to be a long – haul only airline.

Norse and British Airline Pilots Union (BALPA) have successfully entered in to an agreement which will bring hundreds of jobs to the UK. BALPA’a National Officer Terry Brandon, said: “This is a glimmer of hope for the struggling UK aviation industry that is much needed. We are pleased to welcome Norse Atlantic to London and the new jobs they will deliver at this critical time.”

The airline is due to start operating from London Gatwick, when is launches in 2022, which would be a positive for Gatwick’s local economy and adding footfall through the airport.

Gatwick, the UK’s second busiest airport, has seen a drastic decline in passenger numbers since the forced travel bans and restrictions on international travel. Gatwick reported a £204m pre-tax loss, in the first half of the year and has urged the UK government to ease on travel rules.

Operations for Gatwick was set to make a swift recovery, as British Airways announced earlier this month plans for a new subsidiary airline to compete with low-cost carriers Ryanair and EasyJet. Sadly, this recovery will now have to take a more modest pace, as British Airways has now scrapped their plans to revitalise operations at the airport. This was reportedly down to a failure in coming to an agreement with pilots’ union BALPA.

Do you think Norse’s strategy for low-cost, long-haul will work? Leave your comments below.

Medicine From The Sky Project Launched in India