There is a new name in the U.S. commercial aviation landscape: on 8 April start-up low-cost airline Avelo started accepting bookings for its flights that will launch on 28 April from Hollywood Burbank Airport (BUR) in California.

Avelo is the first new mainline carrier launching in the United States in over 15 years and is promising to bring low-fares to airports that are convenient to customers in a quest to invert a trend that has seen industry consolidation reduce consumer choices.

“We are making flying more affordable and convenient by taking the greatest efficiencies we can find in the industry and sharing the savings with our Customers in the form of surprisingly low fares,” said Avelo’s Founder, Chairman and CEO Andrew Levy. “Combine that with operating bases at many of the nation’s most convenient airports, infused with a culture of caring, and you have a different and better kind of airline that our Customers will love to fly, our Crewmembers are proud to work for and our shareholders are grateful they invested in.” 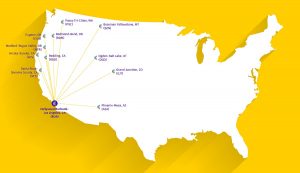 The carrier will begin operation with three single-class 189-seat Boeing 737-800, the same aircraft Ryanair operates, and will connect Burbank Airport to 11 destinations in Western U.S. with fares starting at $19 (£14) including taxes. The regional airports that will welcome Avelo flights starting on 28 April include Bozeman, Montana (the airport that serves Yellowstone National Park), Phoenix-Meza, Arizona and Santa Rosa-Sonoma Country, California (close to Napa Valley).

Burbank Airport is marketed as the airport that “gets you to and from Los Angeles without the hassle LAX is famous for”, adding that it is closer to Universal Studios, the Hollywood Hall of Fame and the Hollywood Sign than its bigger counterpart. LAX has recently introduced a regulation that prevents rideshare services like Uber and Lyft to pick up passengers in front of the terminals, requiring passengers to take a shuttle to a dedicated area in one of LAX’s parking lots. Burbank, on the other hand, allows passengers to be picked up and dropped off just a few steps from the entrance of the airport and from the gates.