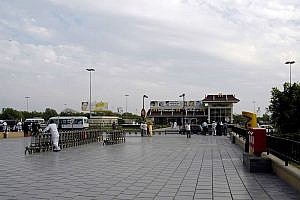 Hope is now fading that any passengers on flight PK303 that crashed just outside Karachi earlier today will have survived.  The domestic flight from Lahore to Karachi ended its journey by plunging into a residential area close to Karachi’s Jinnah International Airport and bursting into flames.

There is still some confusion regarding the number of survivors but it is unlikely to be more than one or two.  Most of the people who have already been rescued from the crash area are from the houses that were badly damaged when the Pakistan International Airlines Airbus crashed into the Model Colony neighbourhood of Karachi.  The narrow streets, packed housing, and crowds of onlookers are hampering the efforts of the emergency services.  It will be a while before the true toll of this horrific crash is known.

The Cause of the Crash

It will also take time to work out why the plane crashed.  Witness accounts vary but it’s clear that the plane circled the airport two or three times and attempted to land once.  During his final conversation with air-traffic control, the pilot reported to air traffic control, “We have lost two engines. Mayday, mayday, mayday. It’s serious.”  The pilot reported a technical fault that is now believed to be the reason the landing gear did not engage.  In a statement to CNN’s Abdullah Khan, a Pakistan International Airlines spokesman said the pilot “had been told both landing strips were available for his use but he preferred to use the go-around landing route, we are looking into the technical issue.”

Is Airworthiness an Issue Relating to this Crash?

This fifteen-year-old Airbus A320 was flown by China Eastern Airlines from 2004 until 2014 when it became part of PIA’s fleet. Its last government check was carried out on 1 November 2019.  And this is recorded in the airworthiness documents relating to the crashed Airbus 320.    But, since then, the plane has been inactive due to the coronavirus pandemic.  On 18 April 2020, the chief engineer of PIA signed a certificate to the effect that maintenance had been carried out.  It states, ‘the aircraft is fully airworthy and meets all the safety’ standards.  Statistically, the Airbus A320 is one of the safest aircraft.  We must wait for the results of a full investigation to find out why this one went down.

Flying Palaces of the Insanely Rich