Japanese flag carrier Japan Airlines (JAL) has decided to take up a controlling stake in Chinese budget carrier Spring Airlines Japan to make it into a subsidiary.

Formally headquartered at Narita Airport in Tokyo, Spring Airlines Japan was 33% owned by Chinese low-cost carrier Spring Airlines, the operator that has brought the bare-bone dirt-cheap flights model made famous by Ryanair in Europe and Spirit Airlines in America to the Chinese skies. However the financial difficulties caused by the COVID-19 pandemic forced Spring Airlines to inject 750 million yuan (£83.4 million) into the Japanese arm of the company to keep it solvent, therefore diluting the ownership of the other Japanese investor and ending up owning a 57% controlling stake.

Japan Airlines has decided to raise its ownership of the Spring Airlines Japan from 5% to 51% by investing into the carrier approximately 10 billion yen (£65.8 million) out of the 180 billion yen (£1.18 billion) raised through a public stock offering in November 2020 as a measure to survive the crisis brought by the pandemic.

“We are very much looking to the future and beyond the coronavirus pandemic and we believe this partnership with Spring Airlines will work well,” a Japan Airlines official said to the South China Morning Post. “This will give us greater access to parts of the Chinese market that previously we have not been able to reach. We are looking three or four years into the future and we are anticipating that the industry should be back to 2019 levels by 2025”.

The carrier currently flies a fleet of six Boeing 737-800 aircraft in a two-class 189-seat configuration and serves eight destinations in Japan and in China from its Tokyo Narita base. 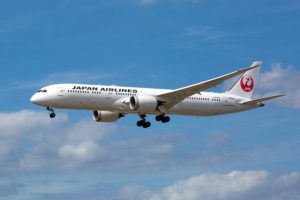 China is by far the largest market for Japanese tourism with almost one in three tourists arriving in the “Land of the Rising Sun” coming from China in 2019. With this acquisition Japan Airlines is trying to position itself to take advantage of the travel rebound that is expected to arrive after the coronavirus-induced crisis ahead of its main competitor All Nippon Airways (ANA), which is planning to launch a new low-cost subsidiary by March 2023 operating between Japan, Southeast Asia and Oceania.

According to Japanese government data reported by Japan Today, in 2019 low-cost airlines accounted for approximately 10% of the Japanese domestic market, but for 25% of the international market. JAL and ANA are keen to take advantage of this trend which may however have been hampered by the crisis. ANA already has a low-cost subsidiary called Peach flying 34 Airbus A320 and A321 aircraft to 20 airports in Japan and the rest of Southeast Asia, while JAL has always maintained its distance from the low-cost carriers competitive scene.